FIRST, as I anticipated, my brother Dave cracked the Venter code. Actually, within minutes of reading my post, at 12:34 am his time, he was trying to explain it to me in a gmail chat.

Dave: You’re not going to believe this, but I already had a program that would decode it.
Me: No way.
Dave: Yep. A geocache puzzle was based on it so I added it to my code last summer. So for example: TTAACTAGCTAATGTCGTGCAATTGGAGTAGAGAACACAGAACGATTAACTAGCTAA decodes to: LTS*CRAIGVENTERLTS* (LTS* means letters)

Right. That’s SO obvious. Then a minute later, he writes:

Dave: Ok, I found the watermarks here (link to the PDF of Venter’s paper in Science magazine with pages of incomprehensible (to me) gibberish).

A couple of minutes pass…

Dave: Hmm… My table is only partly right.
Dave: Hmm… well, I will write a decoder tomorrow.
Me: get on it, willya? 😉

Last night he told me he had figured out the code.

Me: Are you getting ready to do your guest post?
Dave: Yes I might write it tonight. Should I post Python code?
Me: up to you. Preferably English. We don’t want to lose my loyal masses you know. All 25 of them.
Dave: Haha. OK, maybe I’ll write it tonight.

This morning, (midnight his time), he writes:

Dave: OK I got the Venter decoder working. It decoded them all perfectly. Only issue now is how to write the article.

So prepare yourselves. Dave is going to reveal how he cracked the Venter code. This is going to be an internet scoop, so tell all your friends about it.

Thanks to Brendan’s iPod adventure, I learned a valuable lesson about importing things into Switzerland today. In fact, I think I may have gained real insight into the economic protectionism that characterizes this itty bitty but ever so expensive country.

Thinking it would be complicated if not impossible to find a 5th generation nano in Switzerland, (the wee beastie is not sold in stores anymore), I ordered a nice green specimen on EBay while I was in the US. Dave then shipped it out to me, declaring a $200 value on the customs tag. We Americans tell the truth! To my surprise, I was required to pay nearly $60 to pick up the package from the Post Office. No money, no iPod.

I raged all the way home. It’s a miracle I didn’t get into an accident. My head very nearly exploded. I immediately called up those responsible. They informed me that once the value exceeds 100 francs, you have to pay VAT, even if it’s a gift from a beloved uncle. On top of that, they charge a flat 35 franc fee to process the package. What? I said. That’s outrageous!  The man explained that a lot of work was involved, and they had to recuperate costs.  If that’s the case, then these people are getting paid something like $300 an hour to rip packages open and then tape IOUs to them. Sounds peachy. Where can I sign up?

I did a post a little while ago about titles. Perusing Newswise recently, I came across two that riveted my attention, for different reasons. The first:

Sniffing Out Leukemia by Turning Dogs into Humans

Researchers at North Carolina State University are narrowing the search for genes involved in non-Hodgkin lymphoma – by turning dogs into humans.

Now that is really something! Has North Carolina State become Hogwarts? Why have a baby when you can turn the family dog into a human? No, really, if there was a contest for the worst and most misleading title+lead sentence of all time, I’d probably nominate this one. I did read far enough to understand that the research here was on the genetic level, not the organism level. No dogs became humans. Nobody is finding leukemia with an actual nose here. If you want to learn more, you’re welcome to follow this link.

Then yesterday, I saw this:
Breast Fat Injection Causes Confusion on Mammograms

Intrigued, I read the lead:

A breast augmentation procedure in which fat from other parts of the body is transferred to the breasts causes can cause false suspicion of breast cancer on follow-up mammograms, according to a study in the April issue of Plastic and Reconstructive Surgery®, the official medical journal of the American Society of Plastic Surgeons (ASPS).

Whoa!  Full stop! Do you mean to tell me that fat from other parts of my body – i.e. hips and thighs – could have been relocated to my breasts? THAT is a win-win if I’ve ever heard of one! Why didn’t anyone tell me about this? On second thought, back in my twenties, when it might have been interesting, I didn’t have that much fat on other parts of my body.

It’s just as well, because it turns out that the fat cells die, making them look suspiciously like tumors. The controversy here is that some radiologists say they can tell the difference, while others say they have to do biopsies just to be sure. I wonder which ones haven’t paid off their equipment yet? 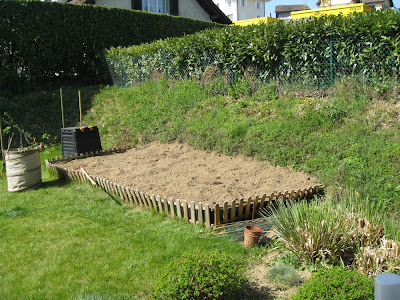 Okay, I know I said three things, but I can’t leave this out. You’ll be happy to hear that blogging is improving my life. My husband Marc read about my weed distress and he actually agreed to help me rid the vegetable garden of its winter weed occupants. This is nothing short of a breakthrough!