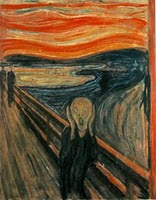 I can’t find my notes! Panic! Not long before I left for the US, I interviewed a scientist who is studying chemical dispersion from the Deepwater Horizon oil spill. Boats from the Woods Hole Oceanographic Institute making daring underwater measurements, vast plumes of noxious chemicals threatening sea life for miles around, international scientific intrigue, sex, drugs, rock and roll… well, maybe not all that. But it was really interesting.

I should have written up the article right after the interview. I intended to. It’s all the European Commission’s fault. I got bogged down in completing the final report for an EU project I participated in last year.

I did just fine explaining what I did in the project. But then came the financial report, which involved engaging the vast bureaucracy of my sponsoring institution. Do you calculate the exchange rate on the day of the transaction, or the first day following the closing date of the reporting period? I was only on the institution’s payroll for one year of the project, and it was an 18-month stint. Should the freelance chunk go under “personnel” or “other”?

Everything had to wait until the drone person in the financial services office could get me the account particulars. Then I found out that I had neglected to subtract the VAT in the mid-term financial report I had submitted last July. Nobody told me about that! Now my final figures are screwed up! Should I take them into account retroactively, on this period’s expenses? Would that be “Other?” And how was I going to get that unrelated translation payment out of the report?

In the days before my trip, I made multiple forays over to campus to hold powwows with the secretary in my former office and the woman in charge of EU grants who claims to understand the reporting rules. The night before I left I stayed up past midnight calculating the numbers two different ways since I still didn’t have an answer to the “personnel” versus “other” question.

The article about Deepwater Horizon didn’t get written. And I didn’t take the notes with me because I knew I wasn’t going to be able to do much work in the US. Wait. Maybe I did pack them and they were pilfered in customs! I can just see it – the highly overqualified customs agent looking through my suitcase, finding the pages, and quickly scanning my barely legible handwriting:

“Dude, look at this? It’s prime info on Deepwater Horizon! I know a guy at the Boston Globe who will pay top dollar for this.”

Okay, so that’s not likely. Yesterday I searched the house from top to bottom. I checked the aforementioned suitcase. I looked in what passes for my briefcase, after I found that stashed in a drawer in the study. I looked in my violin case, in the event that I had piggybacked the interview on my improv class. No luck. I searched the recycling, in case Marc had tossed it, although that would have been entirely out of character for someone who has a reputation for managing his life using scraps of paper taped to the wall.

I looked in the plastic sleeves full of excerpts for my writers’ group. I looked through papers on the table, evidence that Marc and Luc had worked on math while I was away. No Deepwater Horizon buried among the sines and cosines. You have some idea of the desperation here when I tell you that I even checked to see if by ANY chance, I’d put the notes in my viola case…

“Oh, this is bad,” I tell Brendan, who is observing all this with amusement. “Very bad. I’m in deep shit. I can’t find my notes. Where did you hide them?”

See, while I was gone, Brendan’s class took a trip to Edinburgh. Now Brendan is a very bright young man, but organization has never been his strong point. Teachers love to bring this up in parent-teacher conferences. I’ve always blamed it on his father’s genetic contribution. Once in fourth grade he got all the way to school before he realized he’d forgotten his backpack. Last summer, he forgot to take his passport out of the back pocket of his jeans when he got to my mom’s house, and it went through the washing machine.

The brand-new passport now looks like it’s been going through global war zones for the past ten years. He once had a cell phone, until he lost it. I kept paying the monthly bill for his account until I could cancel it. A month later he found the phone again, in the pocket of a bag he’d taken to a handball tournament. We’ve spent many a panicked morning searching the house for the key to his locker, his gym shoes, his bus pass. He’s beaten a steady path to the public transport office to pay the 5 franc fine for not having his pass when the controllers make a spot check. The first time he went, I accompanied him, fearful that the Swiss would be unpleasant about this protocol breach. I smiled at the man behind the counter, while rolling my eyes conspiratorially. He laughed. “It’s nothing compared to the girls,” he said. “They’re always changing their purses.”

While I’m still in New Mexico, Brendan tells me on Skype that he “accidentally left” his iPod and brand new set of headphones in the Edinburgh hotel room. “I went back and they asked housekeeping and no one had seen it,” he says. “They have my e-mail address, they said they’d mail me if they found it.”

“How long between when you left the room and when you asked at the desk about it?” I interrogate.

“No more than two hours.”

Life lesson number, um, 1,000? Don’t leave your iPod in the hotel room. Where was he all those times we were on hands and knees checking under hotel room beds just to make sure we hadn’t forgotten anything?

“Well everyone was up so late the night before.” His 1:30 am return from the pubs was exemplary, he tells me, in comparison with some of his classmates who didn’t get back until four o’clock in the morning. He assures me that although it was technically against the rules, the teacher accompanying them practically shooed them out the door.

“Brendan, why are you always losing stuff?” I rant. “Why can’t you be responsible for your things?”

“I am not the only one losing things!” he retorts.

“I never lose anything,” I answer.

“That is so not true! What about that cell phone you lost hiking last summer?”

“Well, other than that.”

Which is why he was smiling as I turned the house upside down looking for my notes. “Stop looking like that!” I growl. “Have you seen them?”

No, he hasn’t. And I know it’s true because he’s a terrible liar. What am I going to do? I’ve never lost my notes before. I’m going to have to go on memory. I’ll have to write the scientist and ask for a copy of his paper, purportedly just to check some facts, and then actually try to decipher it. I’m kicking myself, though, because I distinctly remember writing down some good quotes. Now I’ll have to get him to provide them once the article is written. Shoddy. It’s not like I’m writing for the New York Times, but I still like to do a good job.

If it hadn’t been for the European Commission’s ridiculous deadlines (or my ridiculous procrastinating with regard to their reasonable deadlines), none of this would have happened. And now, instead of using my time wisely and reconstructing what I could have from the now month-old interview, I have spent the morning blogging about it. I see deep doo-doo on my horizon …

One thought on “Deepwater Horizon Doo-Doo”