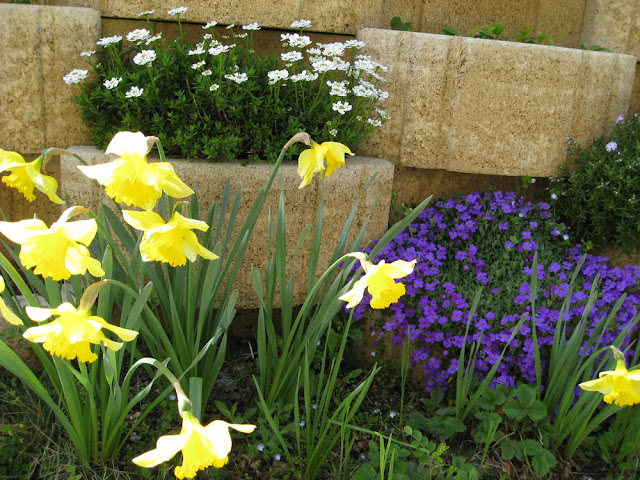 No, not that kind of weed. Sorry, people. This is a gardening post.

Spring has come three weeks early to Switzerland. It’s 24 degrees (that’s 75 to you Americans), everything is bursting into bloom, the birds are singing their heads off at 4 am. The sound of the lawn mower can be heard throughout the land. Unless it’s lunch time or after six pm. Or Sunday. This is Switzerland, after all. There are rules to follow.

The plants on our wall are thriving. Masses of purple, delicious daffodils, grape hyacinths. And, of course, the inevitable weeds.

There is one particular variety that seems to get itself well established extremely early in the season. It has tenacious, pale, slimy worm-like roots that are impossible to extract. It grows into a big, ugly plant with bulbous pale white flowers that have no redeeming features whatsoever. Even the bees shun them. If you pull on these things — even with the help of a dandelion digger — they invariably break off at the base, leaving that nasty root in the ground, from which it quickly sprouts new leaves.

Yesterday, by some miraculous combination of ground moisture and early season unpreparedness on the part of the weeds (what, she’s at us already?), I was able to yank a few out by the roots. Look at these things! This is what I am up against! (The extra-long-rooted dandelion at the right was a piece of cake to pull up, in comparison. I didn’t pull the camera case out of the ground, it’s just there for size reference.) 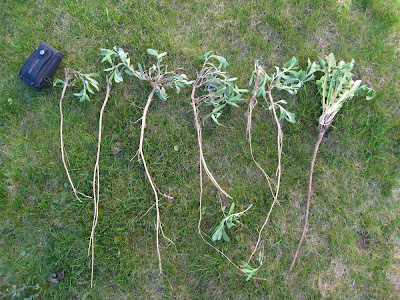 After cutting my thumb while yanking a weed up against the cinder-block wall, I gave up in frustration and decided to go over and assess the state of the vegetable garden. Instead of doing what the gardening books advise and mulching with compost over the winter, I just left the dying remnants of arugula and zucchini in the ground and forgot about them.

Last year I did the same thing and was pleasantly surprised the following spring to find little cherry tomato plants sprouting all over the place. Free tomato plants! My botanist sister (who happens to be an expert on the tomato family) burst that bubble, explaining that second-generation tomatoes growing from seed produce very little fruit, but she convinced me to run an “experiment” to see if that theory was really true in practice. I left a few seedlings intact and then promptly forgot about the whole thing.

Here’s what arugula looks like if you don’t touch it for ten months (it’s the tall stuff in the middle. The rest is just weeds). 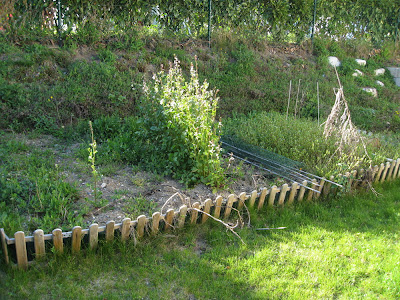 I took one look at that and my back started hurting in anticipation. Clearly, I need to reevaluate the situation. I am hating my garden and it isn’t even Easter yet! This will never do. I need a change of perspective.

I called up my mom and vented. “I have this incredibly important article on the Deep Horizon oil spill to write and I can’t stop thinking about these horrific weeds with meter-long roots snaking into my garden,” I complained. “I think I’m going to just hit ’em with weed spray.”

I never really had any intention of dousing them with chemicals. I was just ranting. But what can I do? I figure I can look at this from a tactical viewpoint, like an army general contemplating the enemy. Should I plan a targeted assault? I could launch an airstrike, with pinpoint applications of small amounts of weed killer. I could opt for a ground-based campaign, consistently attacking the sprouting leaves until the root finally gives up for lack of nutrients. Perhaps I should go with a scorched-earth policy, digging up the whole damn garden and laying it bare. That would show them.

On the other hand, I could take the philosopher’s angle. What is a weed, after all? It seems like a fairly arbitrary connotation. Why is it any less desirable than a daffodil? Who’s to say it is more or less attractive than any other plant in my garden? If I believe in evolution (and I do), then these suckers are definitely survivors. Who am I to intervene in their tenacious quest to win the natural selection struggle? Live and let live.

I could also look at this psychologically. Am I really, deep down, just trying to conform to what I think Swiss people expect? I need to have confidence in myself!  I’m an American! I don’t really like gardening and that’s okay! I can handle a few disapproving looks as people saunter by on their Sunday family walks, assessing other people’s gardens. But then again, I have to consider the control issues here. Why am I so hell-bent on eliminating these weeds, anyway? What did they ever do to me, other than resist? Why do I need to have the upper hand here? Obviously, I need to just let this go. That would be the healthy thing to do. Then I could make room in my psyche for all the beauty that’s there. 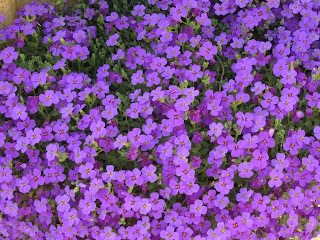 Wow, that feels a lot better. I am a human, after all. Unlike the weeds, I have legs. Walk away from them, Mary. Just walk away.