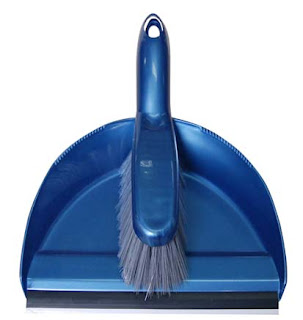 This is going to be an odds and ends post. I have left many things dangling in this blog. Time to clean up.

Disorganization in general is starting to make me crazy. I can’t sit down to work any more if the kitchen counter is cluttered, or if my bed, out of sight upstairs, remains unmade. It’s not a writer’s block-related avoidance thing. More often than not, I’m eager to get to work. No, I am deeply afraid this is genetic.

My dear mom is the kind that makes you clean your room before the cleaning lady comes, so she doesn’t waste her time picking up your mess. You want to make cookies? Fine, but the kitchen better be spotless when you’re done. She has a deep obsession with kitchen counters, or perhaps horizontal surfaces in general – they must remain clutter-free or her karma is just off. And trust me, a karma-skewed mom is a thing to avoid.

The upside of this is that she knows exactly where everything is. She is so sublimely well-organized that when I was there this spring she was able to direct me to the exact part of the exact shelf in the exact basement cupboard where the spare wheels to the desk chair in the study were kept. If it had been my desk chair, I’d have either thrown the spare wheels out or tossed them into a box and promptly forgotten about them. If I subsequently found I needed a desk chair with wheels, I would probably have gone and bought a new chair rather than figure out where they were (or weren’t).

I am not sure why this neatness urge is manifesting in my life at this point, but there you have it. Time to tidy up the blog.

First, the Deepwater Horizon oil spill thing. I promised I’d share the news about the discovery, the details of which had been carefully written down in a set of notes that I lost. I never did find the notes. But the scientist’s article finally got published, and EPFL wrote a press release. The article I wrote has also been published, but unfortunately it’s not online yet. I’ll put a link here when it comes up. Bottom line: nasty stuff that normally evaporates in surface spills got stuck in a huge plume 1000m below the surface, which spread out over a vast area. This was the first deep-water spill ever, so nobody knew what would happen to the chemicals as they rose up through the water column. Now they know. So do the fishes and other critters of the Gulf, even though they don’t read PNAS.

Second, my blood pressure has mysteriously normalized. I went to Walgreen’s when I was in New Mexico this summer and bought a blood pressure monitor, so I wouldn’t have to keep going up to the village pharmacy to get it checked. I was beginning to worry that they thought I was a hypochondriac. The pharmacist is a fellow violist, and every time I went in I could count on a half-hour discussion about the Geneva chamber orchestra, in which he would renew his campaign to get me to play in the viola section again – just one more concert (we’re playing Beethoven!). Now I can track my very own data in the comfort of my living room and avoid commitment at the same time! I’ll probably make a graph for my October doctor’s appointment. I have no idea why it went down. I suspect it may be correlated with a jelly-belly-overdose-induced decision to cut back on my sugar intake.

Third, my garden survived. I think it even paid for itself in vegetables. The carrots, peppers, zucchini and tomatoes thrived (throve?). All that remains are the indomitable zucchini plants, some basil and the tomatoes, whose leaves all look sick and splotchy. The lettuce, arugula and spinach were a fail; something came in the night and devoured everything. A little pumpkin-like squash reached about 3″ in diameter and then abruptly stopped growing. Two or three little cukes similarly gave up the ghost prematurely. Considering my level of competence and my overall expectations, I’m calling the whole thing a success. On the weed front, I have maintained my new philosophy to live and let live. I pull out the worst offenders, but it is no longer war. The yard is also maturing, so the plants that are supposed to be there are getting better at asserting themselves. I find I need to intervene less frequently. Walk away, Mary, just walk away. A great lesson for the mother of two teenagers…

One last thing. This week I’ve been working quite hard – tons of actual paid work, and also a potential guest post on another person’s blog. Yes, I might become famous! No, not really, but it was an opportunity to write about a subject that I haven’t yet treated in this spot – running – and I couldn’t resist. If it gets accepted, I’ll put up a special post with just a link to that other blog. I’ll expect you all to go rushing over there to read it and comment on what a great guest post it is. Like “Amazing post. How did you find this fabulous writer?” Please?

If it doesn’t get accepted, I’ll post it here, and you can all read it anyway.

One thought on “Tidying up”