We’re back! What a hike. We did the “Tour de Mt. Ruan” — a four-day hike that straddles the mountainous border between Switzerland and France. I didn’t intend to do journaling on this blog, but I didn’t intend not to do it either, so here’s a recap of the highlights for anyone who’s interested. 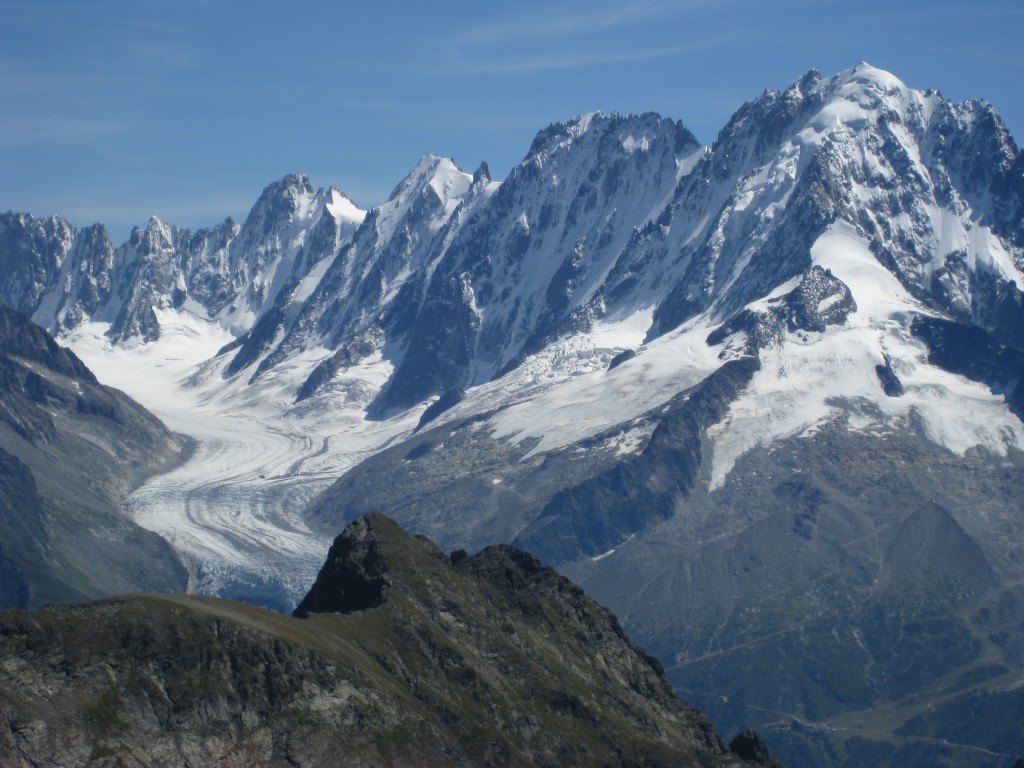 Day 1: I finally find a map that covers the French portion of the tour in the gift shop at the Emosson dam, the starting point. What a relief. I am a map junkie. I cannot go into the mountains without a topo map. I need to know where the cliffs are and if we are going around or over them, and how many more meters of climbing we have to do at any given point in time, because I need to parcel out the chocolate accordingly.

We hit the trail at about 11 am. A couple of hours later, we pass by the famous “traces de dinosaurs”. A geologist from the Natural History Museum in Geneva is on site ready to explain that once this was a sea and the rock was a sandy beach and there was a medium-sized dinosaur that made tracks there going back and forth from the bar ordering Mai Tais. We didn’t stay for his exhaustive explanation, but made our own tracks up to the high point, the Cheval Blanc.

Silly us. We thought it was the pass you can see in this photo: 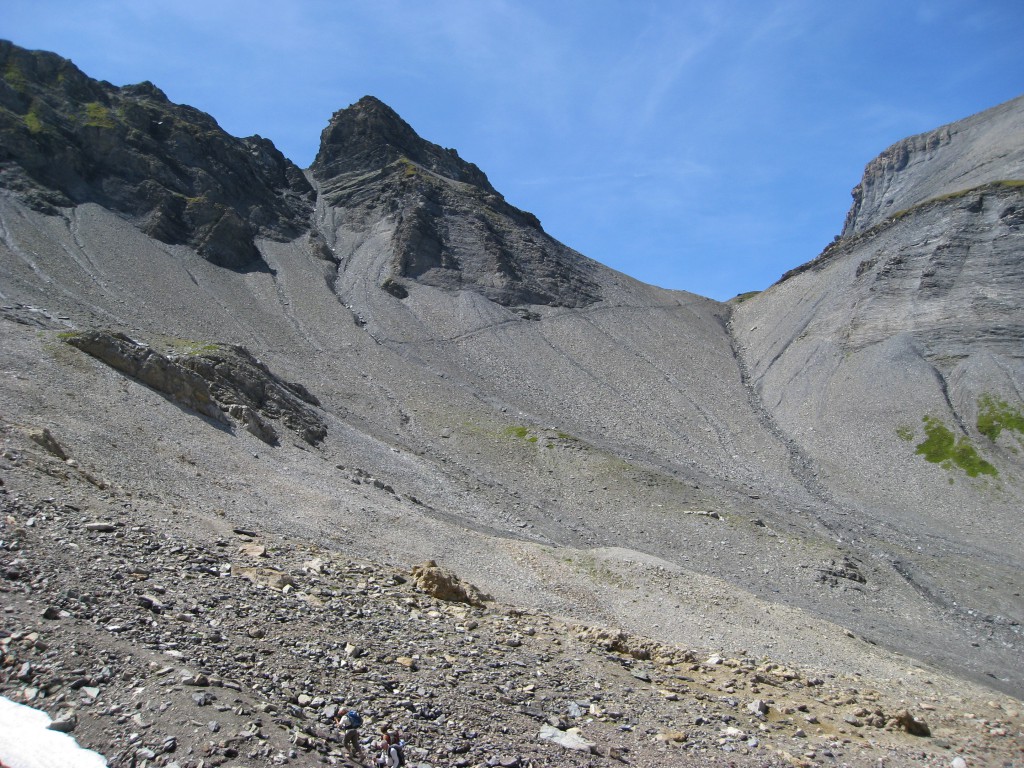 Turns out that was about the halfway point and the Cheval Blanc is the mountain off to the right, not a pass. Our boys power on up, undaunted by their loads of fresh apples, water and mandatory summer school reading. Near the top, a Swiss family bounces past us on their way back down. The picture at the start of this post is of the view from the White Horse.

On the long trek down to the refuge, we negotiate a ridge that’s swirling in fog, shimmying from one side to the other, wondering where the hell the refuge could be in this inhospitable landscape.  It finally materializes on a slope dominated by tame Ibex.

We wait in line for the shower-in-a-shed, drink in the sunset over Mt Blanc along with a couple of Corsican beers (the boys too; they’re legal here, after all), and fall asleep in a dormitory to the lullaby of a truly formidable snorer. 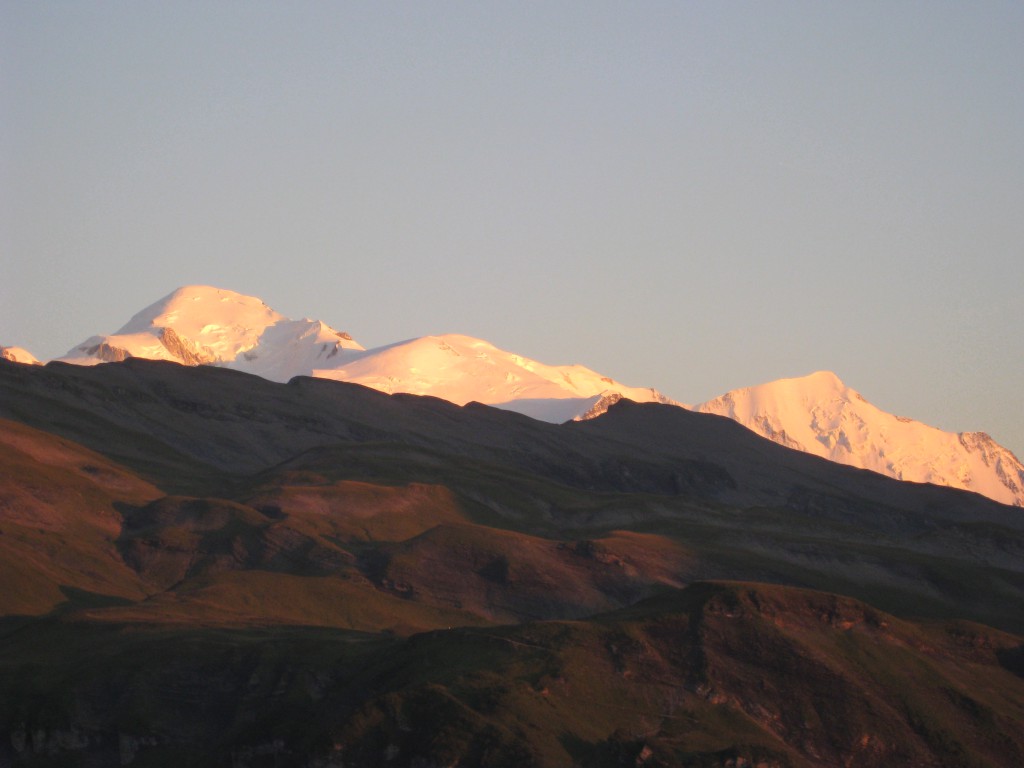 Day 2: Getting Brendan out of bed proves to be no small feat. He is accustomed to sleeping until at least 8:30 or 9:00, noon at best on weekends, but last call for bread and butter here is 7:30. We finally succeed, and at 7:29:59 he eats his slice of bread and we once again slather up with sunscreen and hit the trail.

It’s a long day. Half of France appears to have noticed it is a beautiful day, and the gorgeous, waterfall-strewn valley called the fer à Cheval (“horseshoe” – yes it sounds a lot sexier in French) has become a superhighway of families and endless groups of earnest 60+ hikers. The far end of the valley, appropriately called “le bout du monde” (the end of the world) is like an ant hill. Could this be the rapture? Or is everyone headed to the edge of the world to drop off their Coke bottle, like in the Gods Must be Crazy?

Halfway up to the refuge, Luc announces he’s going to start complaining. Good thing he warned me. I give him one of my walking poles and we inch our way up. At the refuge, Marc and Brendan are waiting with beers. Maybe this is the rapture, and I have died and gone to heaven. Cool! I wasn’t counting on that.

Day 3: Today is the scary day. Marc’s freaked out even before we leave the refuge. His vertigo is on red alert, because we have to go down a “delicate” passage of ladders and chains, after having climbed a pass and negotiated a ridge. The whole morning, he keeps looking ahead and saying “Do we have to go up that?” and “Is that where we are going?” I keep reassuring him that we’ll deal with it when we get there. Nobody’s going back to the end of the world. We get up to a modest peak called the “Tete des Ottans” and I feel great. I love being on mountain tops and ridges. I’m sure in a previous incarnation I must have been either an eagle or a goat. Okay, probably a goat. Marc, on the other hand, looks like he’s going to puke.

We rest a little, eat an energy bar, and then head for hell. The guidebook said (I’m translating) “The hiker’s curiosity will be attracted by the sudden drop-off, and upon closer inspection, will see an empty hole with ladders and chains…” Marc was incredulous. “What moron would be attracted by a drop-off?” To make it even more stressful, we have an audience – a family below is waiting to climb up. Brendan heads down first. A few of the metal things holding the chains in place have become unanchored from the rock, but I don’t point that out to anyone as we descend. You lose your grip here, your brains are splattered all over the rocks below. Not a nice image to have in mind as you try to find a place to put your foot. Marc is fine here. He has something to hold onto. Go figure.
We all make it, and the other family starts up. Here’s a picture of the young woman, blocked halfway up. She has to get through that hole at the top. Personally, I think going up would have been easier. 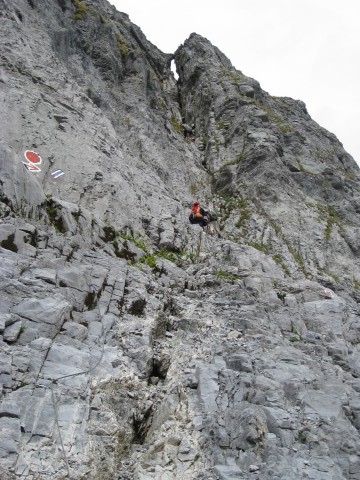 As we scramble down the scree slope under the cliff face, we see a block of ice detach from a nearby glacier; it crashes down with a boom, and then like one of those fireworks with the popping aftereffects, we hear it break up into a million little pieces and scatter all over the slope. We see a mother goat and three babies scamper over another snowfield and join a big herd perched on ledges of the cliff. I wonder what they do there, other than work on their balancing skills. There’s nothing at all to eat, as far as I can tell. Every now and then a little goat loses his balance, falls, lands miraculously on all fours and then scampers back up to try again. Goat gym.

We stop at another refuge for a drink and our lunch, and manage to clear out before a helicopter arrives with a load of stuff. I watch it maneuver the dangling payload onto the porch of the refuge – quite the piloting skills.

We climb another 300m to the mythic moon-like pass where we almost got hypothermia a few years ago. Sure enough, it starts spitting rain on us up there. It’s jinxed. 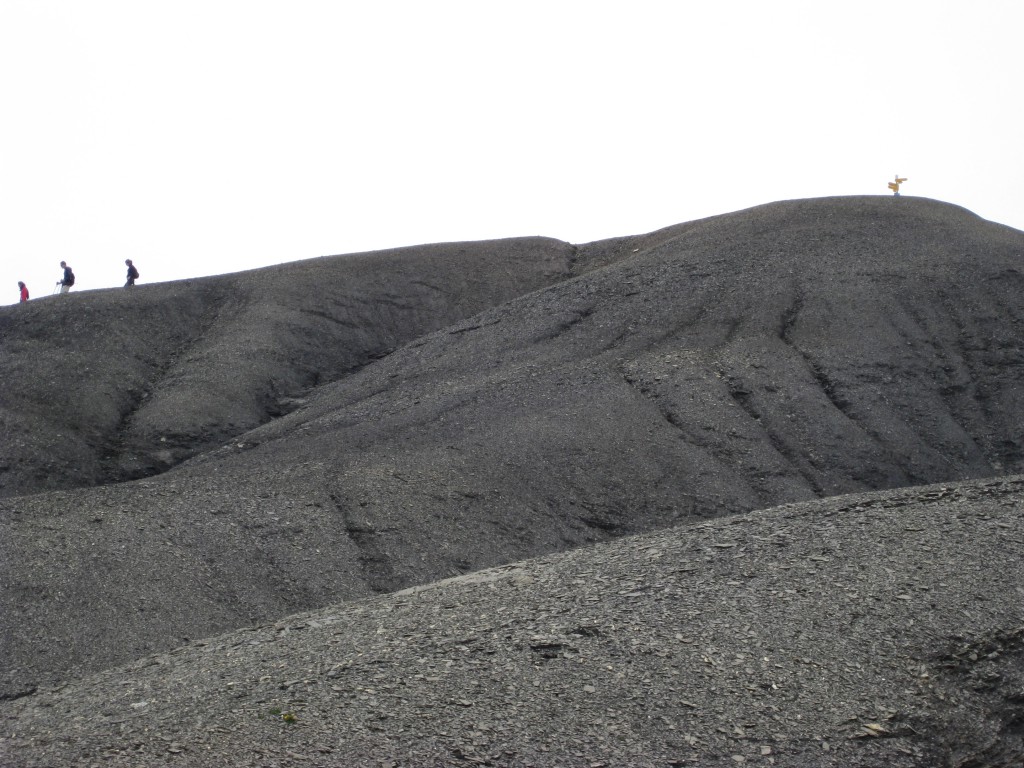 Day 4: I’m sort of hoping the weather will be terrible, because I have an escape route planned. My feet and legs are killing me. I keep thinking “What was I thinking?” But the forecast is for a glorious day, and indeed it dawns as such. We offer the escape route anyway (1000m down to Salvan, where we can catch a train and bus back up to the starting point), and Brendan, bless his heart, says “I don’t want to take a train.” Luc looks like he’s contemplating fratricide. Here’s yours truly gearing up for the final day, clear skies beckoning:

We haul the packs up onto our backs and start the 500m climb up to the col d’Emaney. Luc and I fuel ourselves with chocolate the whole way up, and on the pass, we’re rewarded with a picture-perfect view of Mt Blanc flanked by two peaks in the foreground. But those peaks are on either side of the next pass we’re supposed to climb, appropriately called the col de Fenestral (fenetre is window in French and Fenster in German)… After extensive map consultation, we decide that this window is too high (600m more climbing!) and we will take the door (around the flank of the mountain), instead. We’ll avoid the train and settle for just the bus. Brendan’s okay with that.

As we head down off the pass, I hear a whooshing sound, and look up to see an enormous bird flying just over our heads. It’s a “gypaetre barbu” (bearded vulture), quite a rare bird. I take it as a sign. We have made the right decisions. We stop off at a super-friendly alpage where a man is stirring huge vats of cheese over a fire in a dark chalet and buy a huge hunk of wonderful cheese and some serac – which is pre-cheese, a kind of cottage-cheesey type substance. It’s full of whey proteins and apparently incredibly good for you.

We pass a field full of wild blueberries which I can’t stop and pick, because if I do we’ll miss the bus and get stuck in Finhaut for two hours while the bus drivers take a break. The trail is truly lovely, winding through a larch forest. I decide to come back for the blueberries another time. We make the station with ten minutes to spare, and congratulate ourselves by sharing yet another bar of chocolate. 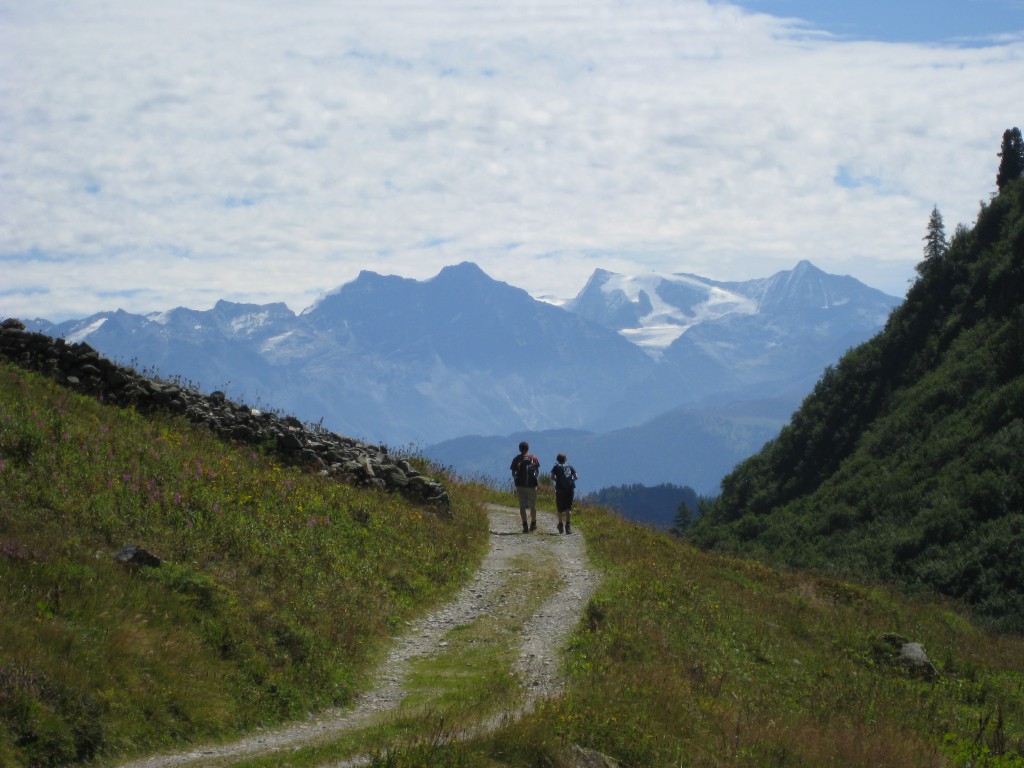 I’m amazed that Brendan and Luc still acknowledge us as parents, even when all the chocolate is gone. Nothing short of miraculous. They’re tough, patient (this trip involved a lot of waiting for us to catch up) sure-footed and good humored. We’re lucky to be related to them. Maybe someday they’ll torture their own kids just like this!

One thought on “Hiker heaven”