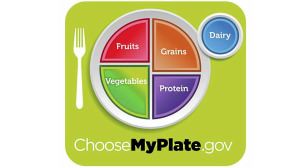 My apologies for the long dry spell. I had a couple of riveting novels to finish reading, and I was so disappointed in the new nutrition guidelines that I couldn’t get up the energy to write about them. One, the dinner plate looks nothing at all like a Rothko painting, and two, there is no dessert on it. Not even a single jelly bean. There was so much gnashing of teeth about the old guidelines and how horrible they were that I admit I was expecting something a little more inspiring. At least in the old ones they drew little pictures of food, for those who were unclear on what constitutes a ‘vegetable’ or what counts as ‘dairy.’ “Whaddya mean I don’t eat enough fruit? I had two bowls of Froot Loops for breakfast!” The guidelines also imply that you should drink milk for your dairy, which I find blatantly disingenuous. To be fair they should have put another circle to the upper left of the plate, labeled “alcohol.” Everything in moderation, right? But for me, the deal breaker was dessert. And that’s all I’m going to say about it.

It was also the final week of the French Open and Roger Federer was still in the tournament, so I had to watch. He rose to sublime new heights of tennis mastery over Novak Djokovic in the semis. There’s that kid on the other side of the net, shooting bullets at him at a gazillion miles an hour, and he still manages to look smooth and unconcerned. But then Nadal cleaned his cuckoo clock in the final. I don’t even want to look at the local paper this morning. If they’re not checking him into a retirement home, they’ll be whining about how fatherhood has ruined his focus. News flash!  You can’t win all the time! And Nadal is extraterrestrial on clay. He probably sleeps on the stuff. Eats it for breakfast.

In between sets I went onto YouTube and watched some classic Federer commercials, like this one with the Lindor balls at the airport security check (strip search, anyone?). I ran across a great clip where he’s supposed to sit looking serious while the interviewer asks him questions in Spanish. He can’t stop laughing. He breathes deeply, bites his lip, goes to get a drink of water, does everything he can think of, but every time the guy starts talking Roger just cracks up. I love it. I challenge you to watch it and not laugh.

Here’s another one where Federer and Nadal are supposed to be answering questions and they both can’t stop laughing. We should all start the day looking at a clip of someone laughing. It’s great therapy.

Between the semifinals and the final I had my own “tennis moment” at a lovely if tiny tennis club in the village of la Tour de Peilz, pronounced somewhat but not exactly like la tour de Payh. For some inexplicable reason, my rate of unforced errors dropped from one out of every two shots to one out of every four or five, and my serves all went in. With me at the net and my partner Deborah, aka the “the human wall,” at the baseline, we made a formidable doubles team. Add in the physical intimidation factor (I’m just shy of six feet tall), and it was a clincher. We won 6-0, 6-2. I only hit my opponent with the ball once, and that was because I was aiming for the ground between her feet and she kept on moving!  “At least it wasn’t your head!” I laughed. In retrospect, that might not have been all that reassuring.

Swiss interclub tennis is eminently civilized and friendly. After the match, both teams sit down to a meal that is usually bien arrosé (which translates literally as “well watered” but means “accompanied by lots of wine”) offered by the hosting team. We all laugh and exchange stories and gossip about the other teams and life in general.

Yesterday the hosting team served “Mexican food” – including mojito cocktails. It was a warm day, and the combination of not having eaten anything substantial since breakfast and having just sweat out a match of my own sent that puppy right straight to my head. Wow! I’m on a roll! Once these blisters clear up (note to self: don’t wait for the match to break in the new shoes) I’ll be entering a tournament! Maybe I can get my ranking out of the basement!

I try to imagine the same thing happening in the US and fail. My reference points are in Baltimore — the country club circuit would never have let me in the door because I don’t own enough gold jewelry or get manicures, and the USTA is all about winning, so no one would dream of consorting with the enemy. They all wear tennis skirts, too. Here, tennis wear is about function, not status. Finally, a place where I can wear my shorts and not be a social outcast!

And then there’s the alcohol factor. Alcohol is a given in Switzerland in a way that Americans have a hard time getting their heads around. When we first moved here I spent endless hours on the sidelines of soccer fields, getting a workout of my own trying to converse in French with the locals. I still remember my shock the first time all the parents retired to the clubhouse at halftime – 10 am – to swig a few bottles of pinot. Whoa! We’re not in Kansas anymore, Toto!

Parents’ night at school here always involves an “aperitif” – a few stale breadsticks and pretzels accompanied by lots of wine and fizzy water. No one would dream of serving soft drinks. How juvenile! (And they’re about the same price as wine anyway). In fact, now that I think about it, aperitifs are used to mark just about anything of note around here. Swiss wine is really good, but all this imbibing means that very little of the 100+ million liters it produces each year gets out of the country. With a population of 7.731 million, that’s roughly 12 liters per person per year (including children – the legal age for drinking wine is 16). No wonder there’s nothing left to export! It’s all being drunk at soccer tournaments and workplace gatherings. Abstaining is the exception, and I have a feeling it can be a mite uncomfortable, socially. People are remarkably responsible about drinking and driving, however, because the penalties are so stiff. So you can always claim to be the driver and switch to water anywhere along the way and nobody minds.

That reminds me of  my own strenuous efforts to fill our regulation basement fallout shelter with wine, but since it doesn’t involve Swiss wine, I’ll save that story for another day.