I have been remiss. I launched the Yoga Project, started my quest for enhanced mental and physical flexibility, and then went silent. You’re probably wondering how it all turned out. Have I become a human pretzel? Have I attained enlightenment?

I haven’t been completely silent. About a year ago, I published an article on the esteemed web platform known as Elephant Journal about why yoga is not just about being bendy. I gave unsolicited and probably foolish advice to the hamstring-impaired like me who might be scared of starting to practice because they’re so inflexible.

In fact, since embarking on the project in the fall of 2013, yoga has become a permanent fixture of my existence in Vancouver. Why? I’m glad you asked. Here are a few reasons:

I’ve met a lot of wonderful people in my yoga classes (translation: I weaseled my way into some after-class coffee gatherings) and these lovely people are now my friends. I have friends! This has helped me immensely with the transition to this new city. In all honesty, my social life has never been better. This is probably because after a yoga class people are incredibly open and welcoming, their inhibitions somewhat lowered. I highly recommend this strategy for anyone who is dealing with moving to a new place. There’s just something reassuring about having other humans recognize and greet you. And if you’re in Canada, they give you a hug. Oxytocin, anyone?

I swear my body craves certain yoga postures. I can almost touch the floor with my fingertips in a forward fold without bending my knees, and it actually feels good. Downward facing dog? Ahhh. Sweet back relief.

For a while I went to class almost every day; now I’m back to a sustainable 3-4 classes a week, the low-key hatha variety. Occasionally I’ll take in a kundalini when I feel like dancing. Just last week I explained the philosophy to a newbie on the mat next to me, recalling how I felt that first time I tried it. Crazy stuff.

I’d like to say I’ve completely gotten over myself, the self-consciousness and self-judgment that were on display in my first couple of Yoga Project posts, but if there’s one thing I’ve learned from yoga, it’s that there’s always something more to learn about yourself. But I’ve made amazing progress. I OWN my yoga. If I can’t do something, that’s cool. It doesn’t matter. I just breathe instead. Ommmm.

On the other hand, I am still picky about my teachers. There’s one teacher, beloved by just about everyone else, who talks all the time, seriously non-stop, about philosophy and cosmic energy and stuff like that. But I come to yoga to get a break from my brain, thank you very much. I find myself editing the sentences being spoken, which is even worse. “Practice reaching your arms up and out of your shoulders,” he says. Practice?? Just do it, already! Stop gerund-ifying everything! There’s another teacher who also philosophizes quite a bit, but it’s done in a humorous, slightly self-deprecating way. Some teachers bark out instructions, moving too fast for me. Then there are the young women with vocal fry. I don’t know why this speech mannerism irritates me so much, but it does. I also have issues with receiving life wisdom advice from someone half my age. There’s that.

The good news is that I know all these issues are about me, and not the teacher or the yoga, and because Semperviva is such a big studio, there are still a few teachers who pass my stringent irritability criteria while I continue the important work of getting over myself. That’s progress, right?

No, I have not become a human pretzel. No, I have not attained enlightenment. (In fact, I’ve probably gained a few pounds, but that’s my age, or so I tell myself.) But those things don’t matter to me any more, because they were never part of my journey to begin with. I just didn’t know that at the time. 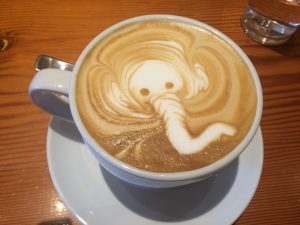 And now, thanks to all those after-yoga coffee klatches, I have a spectacular collection of latté art.

One thought on “Yoga Project update”