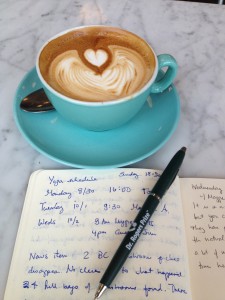 This post will actually cover two classes – you’ll see why in a minute.

Today I’m going to a different studio, this time in Kitsilano. It’s pouring. This studio is larger and lighter; there’s a wall of windows at the back covered with that film they put on buses for advertising. On the outside it says “Semperviva” in colorful letters with pictures of lovely larger-than-life yoga people doing downward-facing dogs. From the inside I can look out and see my car parked on the street.

I’ve chosen this particular class because the Yelp! reviews say this teacher is good for beginners. This isn’t M–‘s beginners’ workshop, but I’m still hoping it won’t be too extreme.

On the mat to my left is a young, tattoo-covered guy. All the classes I’ve attended so far have had a mix of men and women, most of them are fairly fit-looking. There’s a lot of spandex, which is not surprising – Vancouver is the home of lululemon, after all.

We begin the class on our backs. I’m immediately straining to hear M–‘s instructions over the roaring of the room’s ventilation system. As the class progresses I try to follow the movements of the people around me, but it’s not entirely clear that they’re following, either.  I’m amazed to see that the young, lithe-looking woman in front of me appears to be even more inflexible than I am. Tattoo-guy isn’t any too limber either. Another woman in front of me is clearly a beginner at yoga, unsure of the poses. I feel like a veteran. I relax into the poses and adjust them as I need to. The nice thing about a class with a lot of people in it is that you don’t feel exposed at all and this frees you to do your thing. The only trick is trying to carve out enough space around you so you don’t inadvertently whack your neighbor with your arm or foot.

Afterwards I wander across the street to a coffee shop (where the picture for these posts was taken). Vancouver has a lot of coffee shops, and they’re all very artistic with the latte/crema design, a trend that hasn’t caught on yet in Switzerland. I wonder what the lag time will be?

I cycle down the hill to Sun Studio looking forward to a class with C –, whose bio says that he “devotes his energy to creating a space for students to access their own innate presence through posture, flow, breath and awareness.” Sounds promising. As I set up on my mat at the back of the room (near the washroom this time), M– walks in. I must have misread the schedule. Never mind! I still have the rest of the month to try out C–‘s class. More and more people pour into the room. By the time she gets started, it’s packed.

Today’s class is similar to Wednesday’s — good, but I can’t hear anything she’s saying over the combination of the ventilation system and the music playing in the background. Luckily the woman next to me knows what she’s doing, so I just follow her lead. There are a few tough poses, particularly one in which you’re supposed to hold a plank on your elbows and then bring one knee at a time towards your shoulders.

One thing I am noticing: I think all this yoga is boosting my creativity. I am seeing story potential all over the place these days.

While biking up the hill home, an empty caulk bottle came flying through the air in the general direction of a dumpster; it missed. As I continued on I saw the construction worker who had flung the thing. That was a weird looking bird,  I said. Then I started to weave a story in my head: what if a thing, flung through the air towards a dumpster by a careless construction worker, hit a passing cyclist and knocked her out…