A while back I wrote a post on stereotypes. Okay, it was a long while back, when Harold Camping was predicting that the world was about to end. In that post I recapped some pretty standard Swiss stereotypes:

The Swiss go on eating Rostis and chocolate and dipping day-old bread into oozing pots of cheese fondue, occasionally heading down into their fallout shelters for another bottle of Chasselas or Pinot noir, which they deftly open with their ever-handy Swiss army knives, accordions playing cheerily in the background.  When they’re not conducting secret bank deals involving covert Carribean cash transfers, that is. Or cleaning their ovens with toothbrushes. Or hiking up an Alp behind a herd of fat cows whose bells ding and dong sweetly into the picture-postcard valley far below.

Today, I came across something that made me laugh. It’s a story of a Swiss person who has taken the Swiss neatnik stereotype to such an incredible extreme that he completely defies another Swiss stereotype: the one that says the Swiss have no sense of humor. It seemed like an appropriate thing to share on April 1st. It’s no joke, though.

This guy, Ursus Wehrli, likes to tidy stuff up. In a big way. I can’t believe I have lived in Switzerland for almost 10 years and the first time I read about him is in the New York Times. Actually, scrap that, I can believe it. See, he’s Swiss-GERMAN and I live across the Rosti-divide. But that’s another stereotype.

He tidies everything – a pine branch is reduced to neatly stacked lines of sticks and branches. A bowl of alphabet soup is alphabetized.  Cars in a parking lot are sorted by color. A Seurat painting is reduced to a bag of dots. The stars in the heavens above are all sorted by size and luminosity, and stacked in neat rows. It’s hilarious. You can go and see a whole gallery of it at Daily Picks and Flicks (I assume they have permission).

I bet he was commissioned to help set up the Nespresso displays. The color coding could have been done by wavelength, though. Just saying. 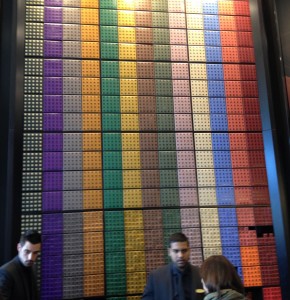 If you have a few minutes, it’s worth watching this TED video about how he’s “tidied up” art. (Brigitte, my friend, this one’s for YOU!!) And it’s all even better rendered by him in his precious Swiss-German accent.

I would venture out on a limb here, and say that even my mom might find that this “let’s get everything sorted out” has just gone a little over the edge here. But then again, maybe this is her idea of heaven…

Oh, and by the way, cleaning the oven with a toothbrush? That’s not a joke around here, either.