So Marc turned 50. It was a big event chez nous, with a huge, fantastic party to which he invited everyone he could possibly imagine inviting. The weather cooperated beautifully, and a good time was had by all.

I may have mentioned before that in celebration of this watershed (yes, that’s a hydrology term) year, we’re going all out and running our aging butts off all around the mountains of Switzerland. Well, the French-speaking part, anyway. What that means is that for the first time in many, many years, we’re actually in fairly decent running shape. Marc, in particular, is in the best shape he’s been in since the 1990s.  He doesn’t look anywhere near 50. But then again, at 30, he still looked like he was about 15.

In keeping with this flamboyant denial of the ticking of the clock, we made the rash decision to run a race the morning after the birthday bash. Perhaps “we” is the wrong word here; in fact, one or more of Marc’s students convinced Marc to run the race, and he managed to convince me it would be a fun thing to do.

During the party, I saw fairly little of Marc because we were each milling about talking to different groups of people. We stood and chatted for hours. I drank maybe three glasses of the excellent rosé we’d bought, and ate lots of italian antipasti and three pieces of chocolate cake (they were small). We fell into bed around midnight.

We woke up to pouring rain. Never mind! It’ll cool things off! The weather forecast promised that all this would let up by mid-morning. Off we went with Marc’s parents to catch the 8:20 intercity for Montreux.

True to form, Marc peed twice in the train WC, and then spent his pre-race time locating other venues for evacuating his bladder. Always an adventure. The rain let up, and it was cool, but humid.

I’d eaten yogurt and fruit for breakfast, and as soon as I started a warm-up run, my gut decided to reject it. Note to self – never eat yogurt and fruit before a race. As a result, I started out slightly dehydrated. Never mind. This is just for “fun,” right?

During the first couple of miles the course climbs a gorge and there was a lot of intermittent walking, so it took me a good while to get into my rhythm. But once it opened up onto a road and the grade leveled off a bit, I found my zone. This continued until about 13km, at which point the course went onto dirt and got a lot steeper. My lower back started to ache, in the kidney zone.

Shouldn’t have had those three glasses of rosé, Mary. 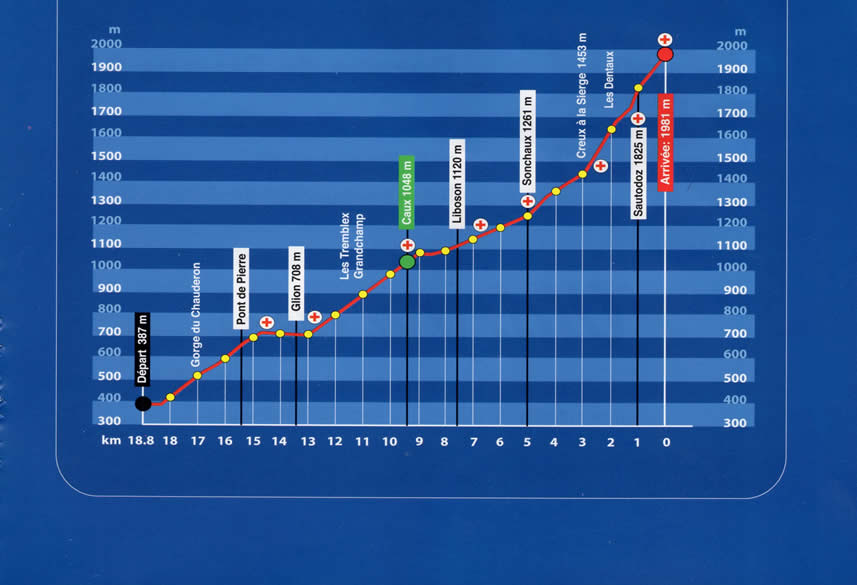 Are we having “fun” yet?

Earlier in the race, I’d passed some women. Now they all passed me back. My legs just wouldn’t go any faster. With 1 km to go, I stopped at an aid station and sucked down some water and isostar, which helped my back pain (was I dehydrated? you think?). I could see the top looming up ahead (there’s a massive radio transmission tower that’s hard to miss) and all I could think about was getting this damn thing over with. The view back down the mountain was spectacular, with wisps of trailing cloud, but I didn’t pay it the slightest attention. My left leg was starting to cramp, the muscle next to the knee that looks so huge on all those tennis players and so little on me. I slowed down and it didn’t get any worse. Finally I made it. At the top it was cold and windy, but the food was good. Apples, bananas and fruity powerbar things.

Marc met me and shepherded me to the t-shirt table and then tried to get me post-haste into the train down. He’d been there for a while. But the train was jammed. He and his dad managed to elbow their way on (with the backpack containing our warm clothes), but his mom and I didn’t. We had to wait a half an hour for the next one.

Marc ended up running a great race, passing the aforesaid foolish student just before the end. In fact, here’s a picture in which it actually looks like he was having fun – and actually running – and this is in the grueling horrible part near the end: 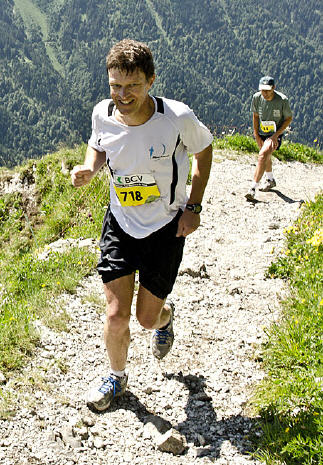 In the train on the way home, Marc casually mentioned that other than a small taste, he hadn’t drunk any wine the night at the party. So now you tell me!!  Perhaps what they say is true, and that with age comes wisdom. I’m still in the stupid stage, obviously.

Once home, we broke out the pistachios and watched Federer trounce Andy Murray in Wimbledon. Fitting recompense for a tough day. All was once again right with the world.

We get a week off now, to recover, before we launch the next mountain assault on the 21st, the Tour des Alpages. At least this one has some downhill in it!