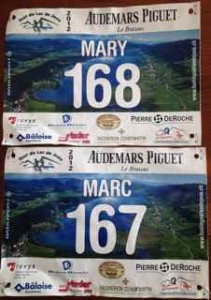 Sorry about the AWOL. Life has been kind of hectic lately. I’ll to do a couple more race reports, and then I’m planning to take some time off. I need a break!

Saturday after our epic Bettmeralp adventure, Marc and I climb in the car and head up to the lac du Joux, in the Jura mountains. It’s the hottest day of the summer (so far), with 33˚ temperatures down in Lausanne. The 24-km race around the lake starts at 2:15 pm, so we’ll be running smack in the highest heat of the day. But over in the US, the entire country is sweltering in 90+ temperatures, so I refuse to feel sorry for myself. In comparison, this is nothing.

My speedy friend Monica is also running this race, and my goal is to see if I can keep her in sight. The first part of the race is hilly, but the second part is flat as a pancake. I lose sight of Monica just before the halfway point, after she zips past me on a steep, rocky descent. Never mind, I tell myself. Just run your race. I’m feeling slightly panicked because I’m really tired and I still have 12 km to go and it’s really hot.

Led Zeppelin saves me. I grab at a snippet of a song we were playing in the car on the way to the race, and set it on “infinite loop” in my head. It’s an instrumental piece, named after Bron-Yr-Aur, a house in Gwynedd, Wales, where the members of Led Zeppelin retreated in 1970 after having completed a grueling concert tour of the United States. It has the right tempo for my pace, and I find it very relaxing and calming. The last thing I need with 12km to go is something that pumps me up too much. Here’s a music video shot at the house in Wales (it’s pretty short):

With those guitar chords chiming through my body, I calmly but relentlessly start passing people. People who look exhausted, hot, tired, beat. Oddly enough, I start feeling better. I am completely in “the zone.”

With 2 km to go, I see Monica up ahead of me! Wow! I start running a bit faster, but not too much. I don’t want to bonk now. Over the last kilometer, I am definitely ready for this race to end. Marc and some other guy (who turns out to be Monica’s husband, who I know well but didn’t recognize) are cheering madly for me at the end, I make a last strong acceleration to the finish, and then go collapse under a tree. What an effort!

I did an experiment with the 20km de Lausanne using an iPod, and I felt then that it helped. But after this race I almost think that mental music is better. It’s like a mantra, you just repeat the same thing over and over in your brain, and kind of slip into a zone. With the iPod, you’re at the mercy of whatever song comes up next. If it doesn’t match where you are mentally, it doesn’t help and can actually make you feel worse.

For you runners out there, what do you do to find that zone – to stay focused, strong, yet calm during a race?