You’re probably wondering what’s wrong with me. It’s already almost May and I haven’t written a single word about weeds yet this spring. Don’t worry, I’m still obsessed. The post is brewing.

I’ve been otherwise occupied, on many fronts.

Brendan and Luc are now able to forage in the fridge sufficiently well for me to leave town for a few days without worrying that they will starve to death. So last week I accompanied Marc to Vienna (he had a meeting). One of my good friends from our Baltimore days was planning to be there, too, and it was a perfect opportunity to see her.

I have a confession to make. My friend Brigitte is very knowledgeable about art, design, history and pretty much anything cultural. And because I knew this, I didn’t even bother looking at a guidebook or the Internet before I left. I knew she would have everything figured out for an awesome Vienna culture-fest.  And she did!

This year is the 150th birthday of Gustav Klimt, the famous kaftan-wearing Austrian painter, and Vienna has turned into a huge city-sized Klimt theme park for the occasion. There was even a sign advertising “Gustav Klimt – das musical.” Every museum has an obligatory Klimt exhibition. We saw three, and Brigitte hit up a fourth the day before I arrived.

The picture below is a mock-up of a frieze Klimt did for the Stoclet Palace in Brussels. In comparison with the actual mosaic frieze, which includes jewels, ceramics, gold paint and metallic bits, this panel is but a washed-out facsimile. Everything – everything – in this house was designed, right down to the dinner plates and silverware, to exist in perfect harmony together. For dinner parties the host and hostess’ outfits even matched the flower arrangements.

We couldn’t figure out why there weren’t any color photos of the frieze in the exhibit, given that it still exists, and found out later that the whole thing is a big huge mess involving the heirs of the house, four sisters, three of whom want to sell off all the art and get rich and one who wants to keep the house intact in all its magnificent over-the-topness. It was made a Unesco World Heritage site in 2009. Problem is that it costs Belgium a bundle, and very likely the house could not withstand hordes of Klimt fanatics filing through its rooms. In the meantime, no one gets in. 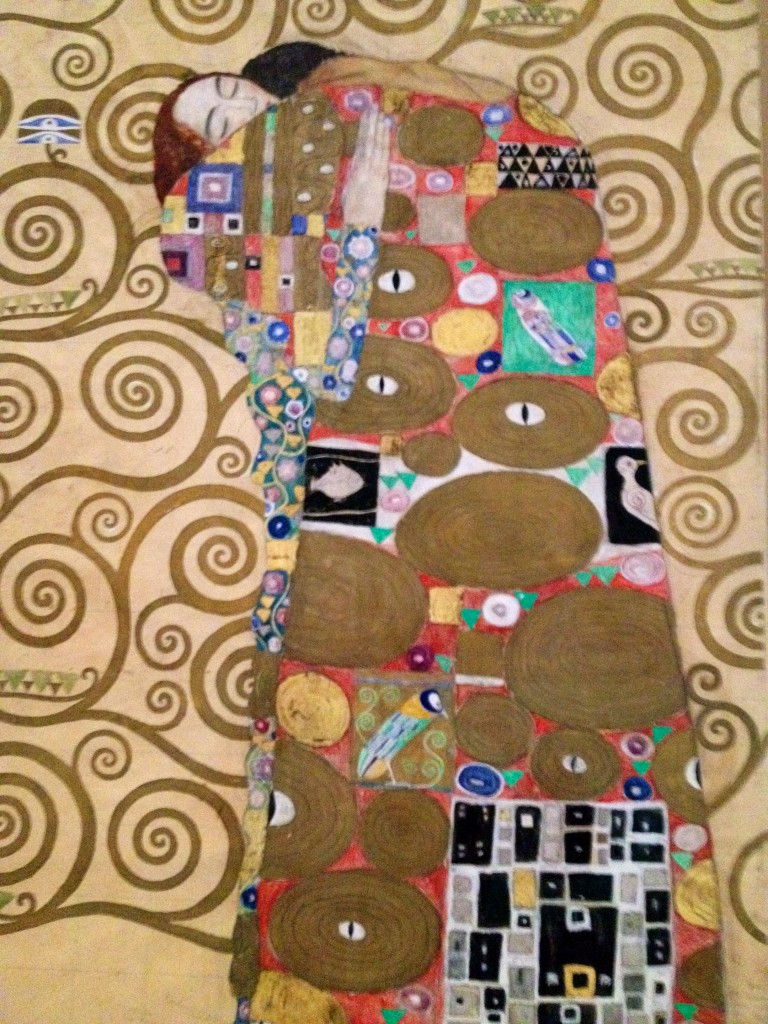 But we didn’t just do Klimt. When in Vienna, you have to do Opera. Here’s a piece of cake I ate at Vienna’s most snooty chocolaterie, Demel, to fortify myself for the long afternoon/night ahead. 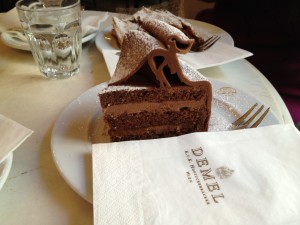 Since the only tickets available for Tuesday night’s opera were 139 euros each, Brigitte and I decided to tackle the standing room ticket line. Earlier in the morning, while eating our splendid 18 euro all-you-can-eat-smorgasbord-from-heaven breakfast, we found a website that explained the protocol of getting a standing room ticket at the Vienna State Opera House.

In brief, you stand in line for up to three hours to get the ticket, then stand in line in the theater again for about a half an hour to get your spot. All that before the opera — in this case, Don Carlos, a five-hour marathon – even starts. So you can see I really needed that cake. Brigitte explained to me that in Vienna, every pastry shop has its own torte, kind of like a “house” cake. This was Demel’s torte. I felt it only respectful to try it out.

We found the standing room line and felt quite smug, as there were only about 15 people ahead of us. Even better,  we just happened to be standing directly behind Vienna’s most knoweldgeable twenty-something opera buff.

Iska, who works in the opera shop and goes to the opera on a regular basis, spent the next two hours explaining everything to Brigitte and me: the advantages and disadvantages of the various spots in the theater, all the tricks of getting the best standing room places, what you could and couldn’t do while in line (you can leave to pee, but not for more than 10 minutes or the guard, who she knows well, will put you at the back of the line). She told us the story of Don Carlos, and commented on the casting and controversy surrounding this particular interpretation of Verdi’s masterpiece. She even sold us cut-rate tickets from her season pack. In short, we were enlightened.

She tactfully ignored the other regulars who were sitting on folding stools, reading newspapers and pointedly rolling their eyes in our collective direction. If she had been an ordinary person, she would have been mortified to be caught cavorting with us clueless Americans so openly. But she isn’t ordinary. Vienna should definitely give its Opera Ambassador position to Iska.

Here she is, patiently standing in line with us: 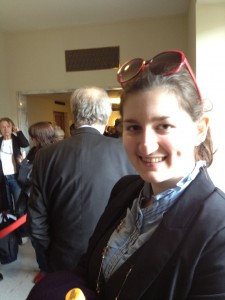 We unabashedly followed her like sheep to the best spots in the balcony, where we had a perfect, unobstructed view of the stage.

You might think five hours of opera would be interminable. But it wasn’t. The standing room spots have a cushioned bar to lean on, fully equipped with subtitle readers. You have to hand it to Verdi, the guy can compose five straight hours of amazing music. The production was fantastic, with a stark black and white design that was very powerful. There was all kinds of symbolism going on that probably totally escaped me. Iska told us she would probably to back for a third viewing before the season was over. It was that good. We enjoyed it thoroughly.

The next day we hit the museums again. I found this dude deep in the bowels of the Museum of art and design (which to Brigitte, who is a designer, was like a little inside peek into the Vatican). 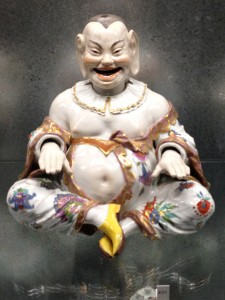 We met up with my fellow writer Sylvia Petter at the Kunsthaus (art house, i.e. museum). What a place! Its designer, Vienna-born Friedensreich Regentag Dunkelbunt Hundertwasser, didn’t believe in straight lines. Nothing in that place was linear. Even the floors were undulating. I felt like a (big) Hobbit. He insisted that trees grow out of the windows and on top of the roofs. I have a bit of a hard time reconciling this guy’s counterculture view of the world with my stereotype of the conservative Austrian mindset. But for whatever reason, he was liked in Vienna, at least by some people. Here’s a picture of a bit of the outside. 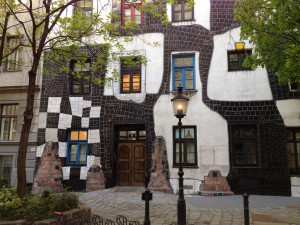 After lunch we wandered through the Hundertwasser exhibit – this guy was visionary-art prolific; oodles of paintings, architecture, lithography, urban planning – and then headed off to another Klimt exhibit.

I took this picture – Death and Life –  not knowing it was against the rules. There was a photographer running around snapping pictures of an old man with a walker and an entourage, so I figured cameras were okay. I hadn’t noticed the sign at the entrance of the exhibit saying “no cameras.” Luckily I didn’t get yelled at until I was downstairs in the Schiele exhibit, where a guard told me I had to take my backpack off my back and hold it on my front. Ironic, as quite a few of the Klimt paintings are of women who have nothing at all covering their fronts… Whatever. 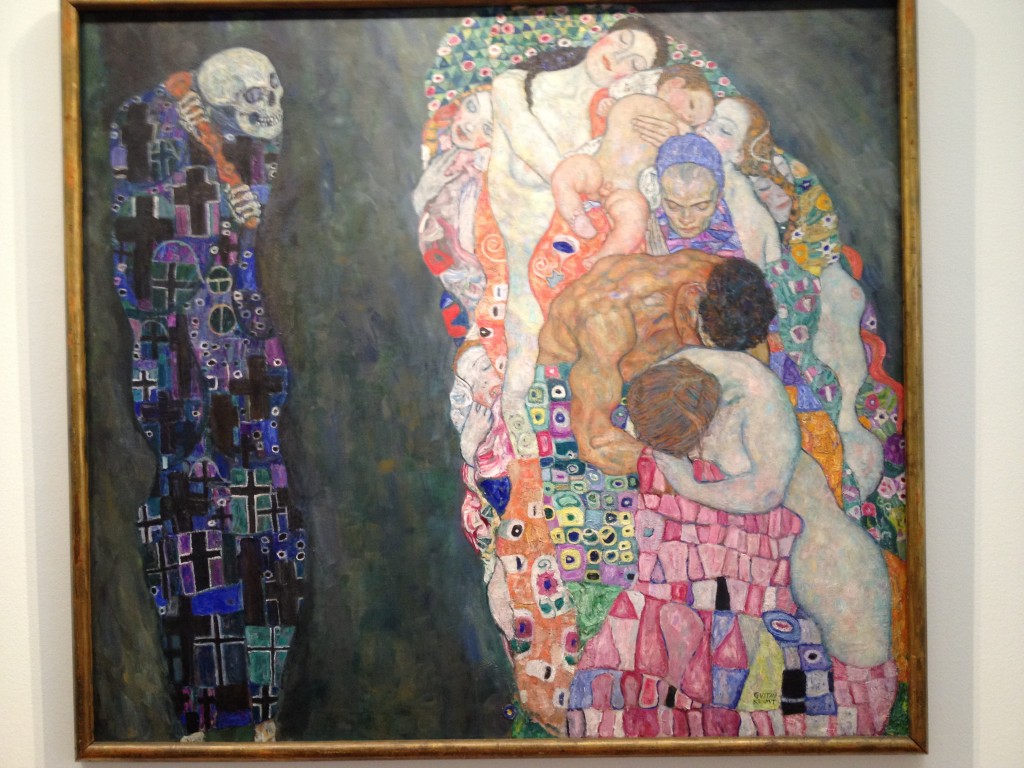 After this, we were pooped, and this is me relaxing in the museums quartier and thinking about the beer and goulash we’re going to have in a little while when we meet up with our husbands again. 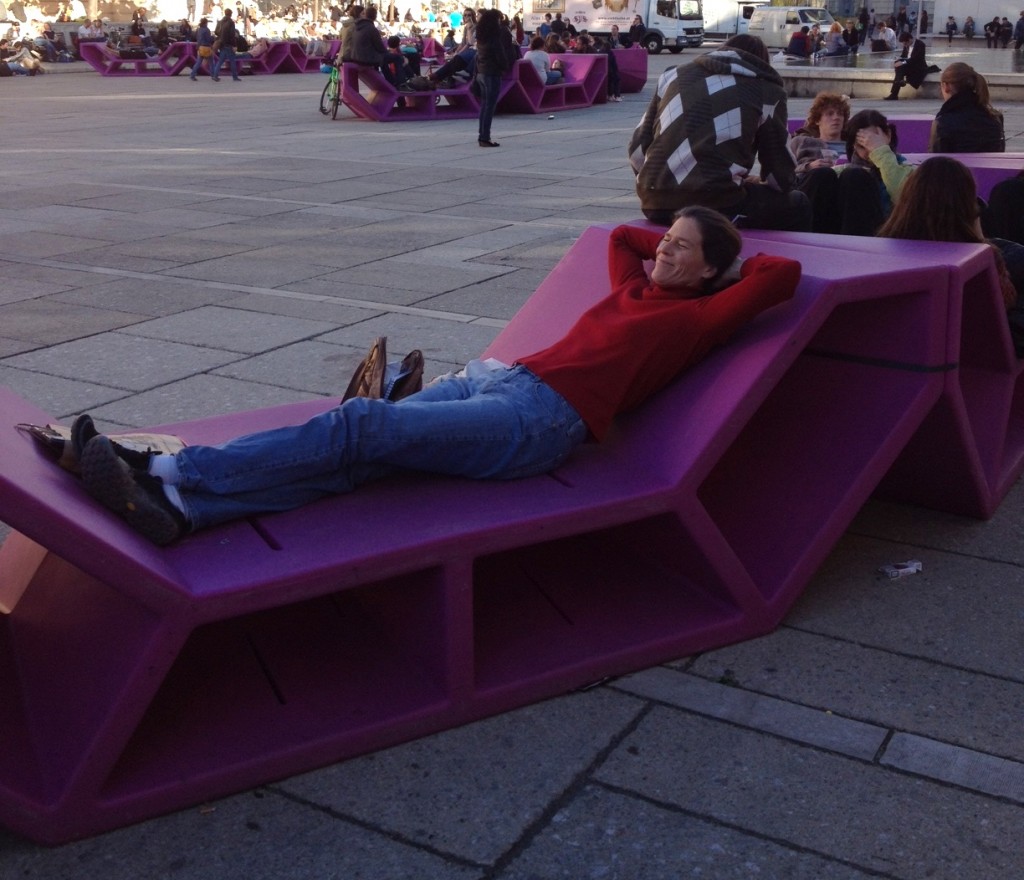 A few hours after we got home, I got a call from Luc. He spent the rest of the day and the next night in the grips of a 24-hour stomach bug. When he wasn’t visiting the bathroom, he was telling me that he was about to die. I was glad to be there to reassure him that he wasn’t, and rub his head and tell him stories about Don Carlos, King Philip and the Grand Inquisitor.

Then Saturday I ran the 20km – and survived.

So you see I haven’t had time to worry about weeds, much less pull any or blog about it. But that’s a post for another day.

6 thoughts on “A waltz through Vienna”