In my last post I mentioned that I took a week-long trip to Holland. This was not Amsterdam; no, sir, this was the “real” Holland, according to my friend Mieke. Although they’ve lived in the US for years, she and her husband Jan are both Dutch and they have tons of relatives in Holland. I tagged along with her, occupying spare bedrooms all over the country: at a potato farm in the southwest, in the northern village of Zevenhuisen, and in the central city of Gorinchem, just outside Utrecht.

A word on Dutch pronounciation:

Gorinchem is not pronounced “gore-in-kem.” No, for the first syllable, you have to kind of make a gagging sound in the back of your throat. Try putting your tongue up around your tonsils and then pushing air out through them: “aghhhhh.” Then the rest of the word follows fast, kind of like this: “ghhhhohr-i-ghhhhem.”

You, like me, might have grown up thinking that Gouda cheese is pronounced “Goo-dah.” You would be wrong. The -ou phoneme in Dutch is pronounced “ow.” So this is “Ghhhow-dah.”  Be sure to get that guttural mucusy growl in the back of the throat going. I’m sure it works better if you’ve eaten some cheese.

I had a few revelations on this trip.

One: Holland is flat. And by all rights most of it should be under water. We went to see a truly formidable engineering project designed to foil mother nature – a storm surge barrier on the western edge of Seeland. It’s no fluke that this country has some really top-notch engineering schools. They need it. The barrier has massive sheets of metal that can be lowered to keep the sea out, should unusually high tides threaten the land. Getting it in place cost 2.5 billion euros, took more than 30 years and necessitated the invention of all kinds of special equipment. This is just one part of an immensely complicated system of dikes and dams and barriers that protects the southwestern part of the country  — see the deltaworks page for details. Seems to me it would have been so much easier just to pay these people to move to higher ground somewhere? Like, say, Switzerland?  I thought, as I toured the project … but hey, home is home. Here’s a map from the site showing all the places where they’re keeping the water under control:

I have a feeling that the Dutch hadn’t slept well for centuries, particularly when it was raining hard, until this project was finished. Queen Beatrix inaugurated it in 1986. I sure hope the Greenland ice sheet stays put. Might not be a bad idea to invest in a Swiss chalet, just in case…

For someone who grew up in the desert, all this water is mindboggling. In Holland, there isn’t any petrichor. I doubt the Dutch lie in bed feeling comfy and cozy when the rain is falling outside, and go out excitedly the next morning to measure how many hundredths of an inch fell in the rain gauge, like I do at home in New Mexico. In Holland, water is everywhere. Most of the fields are bordered by canals. The clouds are low to the ground, it rains in a kind of misty way a lot of the time, and there is often a strong wind, caught by lines of tall trees or massive white windmills as it whooshes by.

Two: You can put almost anything on a slice of bread. Smoked herring and raw onions, for example. Another favorite: slather a piece of bread with butter and then pile chocolate sprinkles on it. The sprinkles stick to the butter. Any stray sprinkles that fall off can be recuperated by licking your finger and pressing it onto the plate. The grocery stores have a whole section of boxed sprinkles. Little kids definitely have it good here. One day when I went down to breakfast there was a bowl of strawberries on the table. Guess where they ended up? 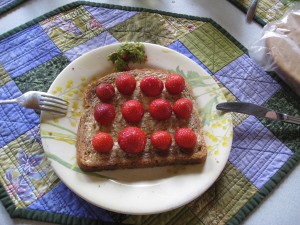 Three: I have a new appreciation for potatoes. Our first stop was on a farm, where Mieke’s brother-in-law grows potatoes, among other things. These potatoes (“pypers” – prounounced “peepers” in Dutch) are destined to become French fries sometime in the spring. Here is the truckload of potatoes on its way into the barn: 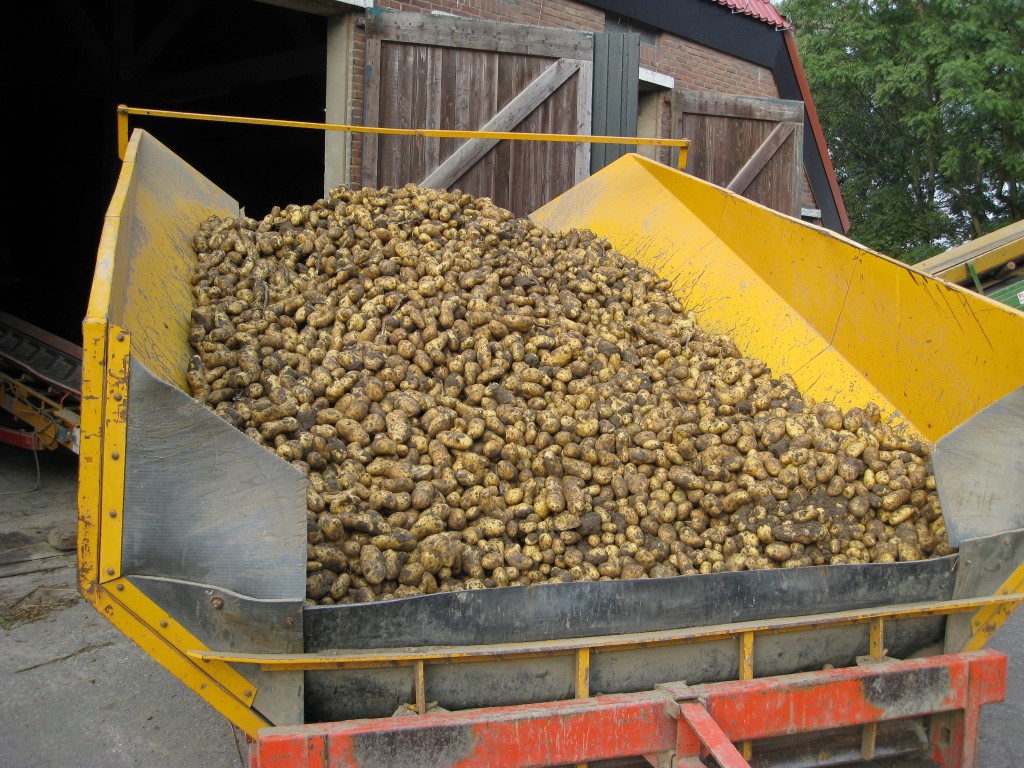 Just look at all those carbohydrates! I took home my very own potato, a huge specimen in the form of a game controller. Here it is in the company of a quarter and a euro. 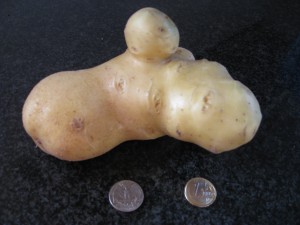 Four: Just because it’s flat doesn’t mean that the cycling is easy. A good headwind, and all bets are off. My legs are still recovering.

On an unrelated note: My apologies to those who tried to subscribe to the RSS feed and got suggestions for Hot Mamas or Dating Connection. I didn’t know anything about Feedburner until last week. Now that it’s straightened out, feel free to subscribe and get Gydle delivered to your cyberdoor absolutely hassle-free. Either that or bookmark it. And please leave comments! I was absolutely stunned to read the comments on my Running and Rambling post – I had two suggestions for barefoot runs in my neighborhood by people who obviously live really close to me, close enough that they recognized where the photo on the post was taken. The world is tiny, isn’t it?