I hope the saying is true, that “absence makes the heart grow fonder.” You must be loving this blog now.

Marc and I were in Ithaca last week, attending a symposium honoring his father and his PhD advisor, both Cornell professors. 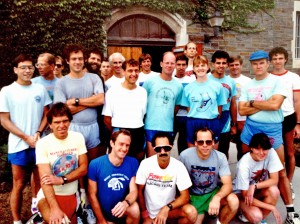 We met in Ithaca, back when I was recovering from a foray into teaching high school math and trying to figure out what to do with my life and he was finishing his PhD. Every day at noon, we’d gather with the High Noon Athletic Club at the back entrance of Teagle Hall.

Here’s a picture of the group as it was when we were there in the late 80s (we’re not in the picture, though.)  At first I could only keep up with them for a mile or so.  Then I’d head off into the Cornell Plantations and back to the gym. 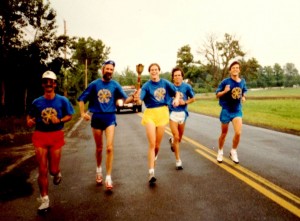 Before long I was hanging on for longer and longer distances – five miles, eight, eventually ten. On the warmup section, Marc and I chatted until he took off with the fast guys. I started socializing with the group, joining them for pizza, then going to races. Here’s a picture of some of us running with a torch (Empire State Games, I think). I’m carrying the torch, Marc’s on the right.

I got faster and faster, and the day came when I won my age group in a race. By that time, we were actually dating, and I’d hold the trophy up in the window as I picked him up in my car. He’d also won a trophy, but his was smaller; he’d only come in third. He likes to point out now that he was running against “Olympic caliber runners” and I wasn’t. But I didn’t care. If there’s one thing that gets Marc’s attention, it’s a little competition. One day he figured out how to use a screwdriver and changed the bases on the trophies, making his taller. It was good fun. 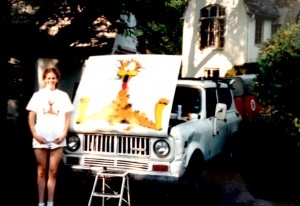 Here’s a picture of something else I did in Ithaca, back then – I painted a life-sized version of Bill the Cat on the hood of my brother’s old Scout. Such young talent. Probably increased its value a hundredfold.

On this visit we joined the High Nooners once again. There were few familiar faces, but even so, the routine hasn’t changed a bit in the 20 intervening years. We had dinner with some wonderful friends from the group, and it felt like only a day had passed since we had last seen them. We laughed at the same silly stuff, and our comfortable conversation felt like a pair of well-worn running shoes. 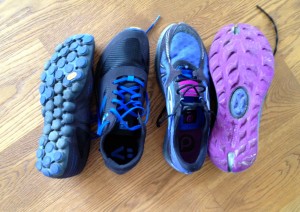 Speaking of which, Marc and I bought seven pairs of new running shoes. Me, two new minimalist shoes (the new NB Minimus trail 100’s and a pair of 4mm drop Brooks trail shoes at right). He got some neon Newtons you can see a mile away and four pairs of trusty Asics.

We left the boys home alone, with admonitions not to destroy the house or stay out too late. On the fourth day, I managed to contact Luc by Skype. He informed me that there was no more food in the house and starvation was imminent. I asked about the broccoli in the vegetable drawer. Broccoli? I stopped worrying.

I didn’t do any writing or work during the trip. I watched all the movies I could manage on the plane, in both directions. I read a Stephen King novel. I slept long and soundly. I didn’t cook a single meal.

In the taxi from Morges Sunday morning, I steeled myself.  I was exhausted from the trip and from a bad reaction I’d had to the half-Mirapex I’d taken for my restless legs on the plane. I was emphatically not looking forward to a house that needed a lot of attention. Judging from the normal state of their bedrooms, I wasn’t optimistic about what awaited me.

We walked in and just stood there, gaping. The kitchen counters were sparkling and bare. The floors had been vacuumed. Being teenagers and it not yet being noon, the boys were still asleep, but I woke them up and hugged them and told them how much they had been missed and how wonderful they were.

Life is full of blessings.