You may recall, in the last episode, I was lying awake fretting about neurotoxic mould and wondering if we had made the biggest mistake of our lives.

Well, morning arrived and the house was still ours. We went by to meet the project foreman, Andrew. During the night a large branch from the gum tree in front of the house had broken off. These eucalyptus trees are known as widowmakers, for their propensity to unexpectedly shed branches at random moments and kill people. Fortuitously, this one missed the roof and it happened at night, so no one got hurt. Was it a sign? As in Yes this project is going to be full of scary surprises but no one will die. 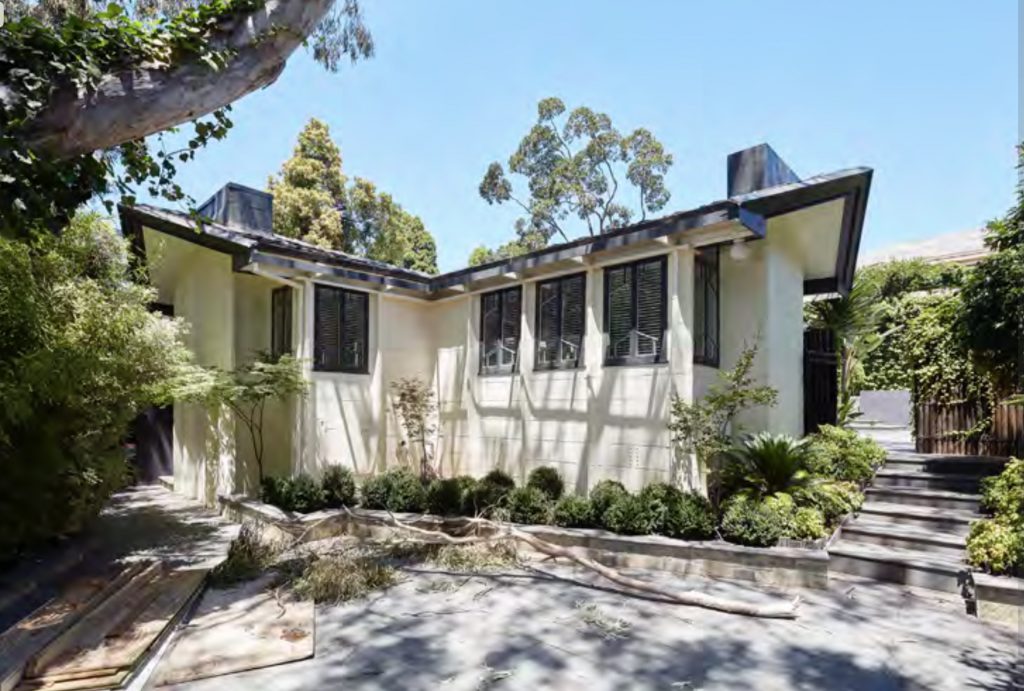 Later, I called in an arborist to assess the health of the big red gum. Although it‘s leaning at quite an angle over the house, it’s healthy. The angle was due to the presence of another tree (since removed); it had to lean away in order to access light. So that was a potential Worm, averted.

The first thing to do was take the blinds down off the windows. All the incredible paned windows were hidden behind horizontal slats. Once they were gone, the light streamed in, and It felt like the house could breathe again. Many of the windows were painted shut, which I had expected, given the blinds. The ones that weren’t had locks installed, but no keys. An insurance thing, probably. By the end of the project, the windows nearly drove Andrew over the edge, between fixing them and painting them. Here’s a picture of blinds versus no blinds. (Note the fireplace that’s been blocked off and the ancient outlet. We’ll get to those later.) 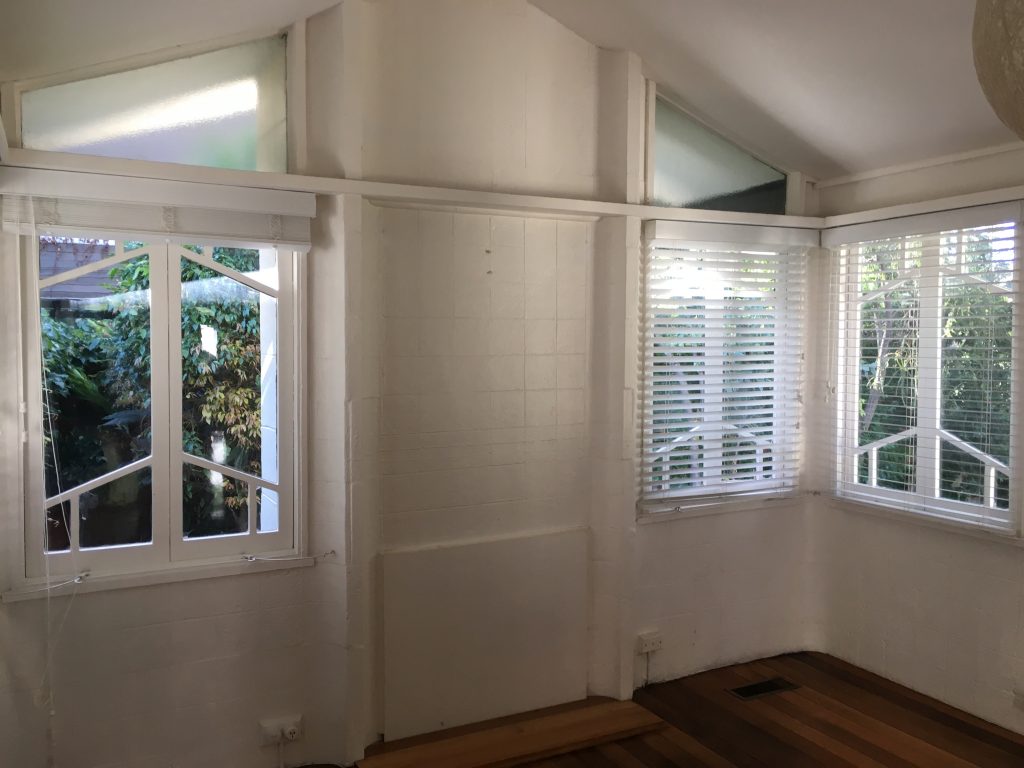 Next, the crew got to work tearing down the bathroom tiles, and found them full of leaves and other various rat nesting materials, damp with rot, badly built and generally in a very sad state. Andrew told me there was a rat corpse in the ceiling (later he confessed there were multiple corpses but he didn’t want to freak me out). I freaked out. A rat infested bathroom!

It’s important to note here that these bathrooms are not in the original design. The house started out with just one shared bathroom, accessed via the hallway, and at some post-war point was bumped out to make a master suite and a second bath. Stuart thinks that the shoddy construction was most likely a function of poor manpower and materials in those years after the war. Here’s Marion’s original drawing: 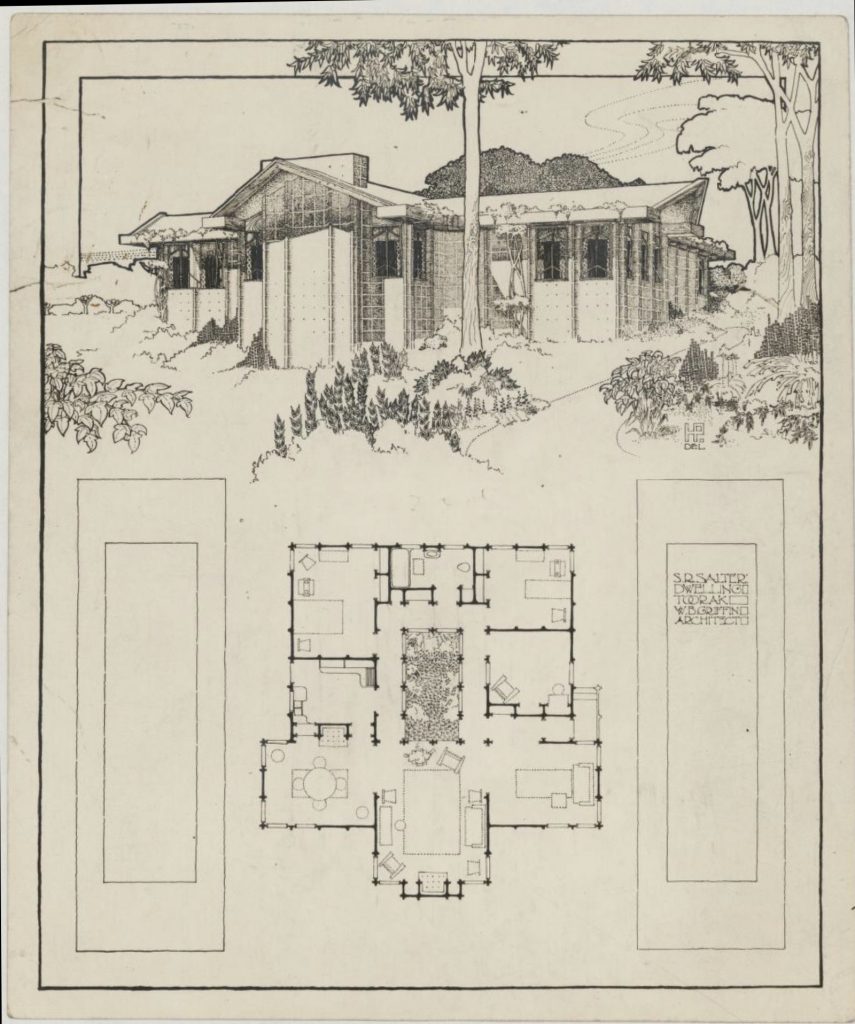 Anyhoo, it was definitely a Worm, and Stuart said that the whole shebang should really be torn down and re-framed, and the ceiling completely removed and replaced. Yes, we said. Do it. Here’s a shot of what we were dealing with: 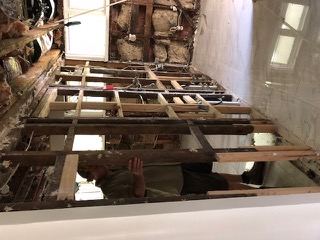 You can’t really see the leaves in the walls here, but the state of the ceiling is pretty evident.

By that time, Andrew’s crew had also erected scaffolding around the outside of the house to begin the job of replacing some obviously rotten timberwork on the eaves. Initial assessments had been optimistic – it didn’t look too bad. We stopped by for a site visit one day and Stuart entertained us by climbing up, grabbing a piece of the fascia, and crumbling it between his fingers. It looked all right from the outside, but the wood was completely rotten. All the fascia would have to be replaced.

Andrew also showed us some convenient possum or rat hideouts in the beams along the fascia, full of leaves and detritus, which the previous owners had attempted to make unpalatable by means of chicken wire.

Here I must digress to address the issue of Australians and possums. These cute nocturnal marsupials have adapted splendidly to the human invasion of their habitat, much to the chagrin of the humans. They’re kind of like deer in North America, except that deer don’t scamper around on (and occasionally take up residence in) your roof. Possums are territorial, so getting rid of them is a futile exercise in whack-a-possum. If you remove one (which is not legal) then another one will just come and take over the territory. They eat all the tasty plants in your garden and if they set up shop in your ceiling, the smell and noise can make your life miserable. The best case scenario is that they find a tree or some other place to live and so only occasionally wake you up in the night when they’re “courting,” and your biggest headache is sweeping up the pellet-like poops on a regular basis. Australians pretty much have a hate-hate relationship with possums. The previous owner was no exception. I knew it was something we’d have to reckon with. Indeed, the landscaper woke a huge brushy-tailed fellow the day they tore down the hideous aluminum wall separating us from our neighbors, exposing a nest in the gap between the fences. I’m happy to say the possum moved back in once the new brush fence was installed. Now, every evening when dusk deepens into night, he emerges on top of the fence and waddles off into the trees. I’m quite fond of him.

Next up, the electrician. I had asked the seller, in the interest of being on the up and up with the insurance company, about the state of the wiring. It was supposed to have been done within the past 40 years. He seemed surprised. Of course! The panel looked newish. All the light switches and outlets looked old, probably even original. But I took him at his word.

Turns out that there was no ground at all to the electrical system in the house. All the wiring was ancient, wrapped in burlap, and it was nearly impossible to sort out which wire went with which outlet in which room. The whole house would need to be rewired, this time with a ground.

There was just one teensy issue: A neat trick of Griffin’s knitlock construction is that the wiring for the celing lights runs up through the hollow concrete blocks, so it’s hidden. The problem with that is in order to change it out, you have to have access to the ceiling. That was a can of worms we were unwilling to even contemplate. God only knows what would be lurking up in there. Dead possums? Live rats? So we compromised, using only low voltage lighting in the ceiling lights (which don’t need a ground anyway). The other down side is that the knitlock is too shallow to accomodate a normal electrical outlet box. Andrew and Stuart managed to solve this problem, and the result is amazing. The plus side of this Worm was that we got to choose how many outlets to have, and where to put them. Compare this to the outlet on the bottom right of the first photo. 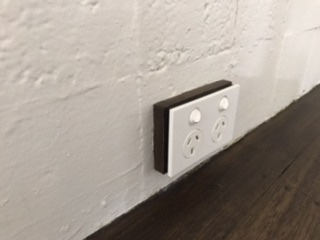 The “demolition” phase also involved pulling up the carpets in the bedrooms. Aussies sure like to carpet bedrooms, but I personally can’t stand wall-to-wall. Especially in the presence of neurotoxic mould. It had to go. And that, my friends, was where we found the next Worm.