My blogging apparatus is rusty in the extreme — hopefully my brain is still firing on all cylinders. I put the laptop on the glass-and-wicker table in the apartment we’re renting on the 16th floor of a downtown Melbourne high-rise, crack my knuckles and stretch out my arms.

Since I last wrote, we have sold our house, given away or packed up all our things, and moved to Melbourne, Australia where Marc is starting a fancy new job as a BMOC at Monash University. (I hadn’t heard of it either but then again EPFL was also an unknown.)

I’ve known we were moving since late November, but the reality of it didn’t hit until we actually sold our place, and then I had to say goodbye to all my friends and leave Luc behind. I loved Vancouver. I loved the weather, the forests, the ocean. I even loved the rain, and this year there was a lot of it. I loved my yoga classes and the friends I made there. I loved my library branch and the local coffee place. I am still irrationally scared of bears, and I didn’t love the tiny ants that invaded my kitchen every spring and summer, but everyone has their limits.

So why move? It’s about life goals for Marc – this job is a good opportunity. And then he’s been wanting to come back to Australia, where he went to high school and university, for a long time. Mostly in secret, I think, but once when we were in Switzerland he interviewed for a position in Perth and came back with a suitcase full of PR materials touting the wonders of Western Australia. Um, no, I said, somewhat unhelpfully. Perth is about as far away as you can get from anywhere else on Earth. The boys were younger then.

It’s also about novelty and adventure. I have always liked change. There’s no better way to explore a new place (and continent) than to park yourself there for an extended period. We’ve lived in Switzerland and Canada, and the east and west coasts of the US, and each has been such a different experience. With the Internet I can stay in touch, and with airplanes I can visit people. What little family I still have in the US have all promised to come to Australia to visit. You should come, too, if you can handle long airplane flights. That was one non-negotiable for me: business class over the Pacific. So far it has been tolerable.

It’s winter. Today is the solstice, and it’s light by 7:00 and doesn’t get dark until about 6:00. Much better than the 8:00 – 4:30 light window in Vancouver on December 21. It doesn’t really feel like winter — more like an awesome fall day on the east coast.

Melbourne is a sports paradise. In our first two weeks here we have been to a rugby game (Australia versus Fiji) and an Australian rules football game. Most of the fans at the rugby game were like us. The players were not. Particularly their legs and upper bodies. Tree trunks come to mind. But they were very polite with each other. The man sitting next to me filled me in on the rules, many of which I was a bit fuzzy on, particularly the part where they’re all piled up and appear to be groping one another. I find I quite like rugby.

The fans at the AFL game were a more varied bunch —grandmas, young couples, families, ordinaries like us, probably because the tickets were cheaper. Ours were in the fan zone behind the goal post, which in retrospect was not the best idea. The guy sitting right behind me was simultaneously trying to coach individual players from the stands, berate the referees, and set a record for the number of beers consumed during a match. The opera world missed a real opportunity with that one. We escaped with slightly damaged ear drums and some choice new vocabulary. The game itself is fun to watch – a huge oval field, 18 men on a side, no protective gear whatsoever, no time outs or huddles, just constant action. Bill Bryson describes it as “loosely controlled mayhem” and I’d agree, apart from the words “loosely” and “controlled”. I also quite like AFL. Apparently Australians do as well —the stadium seats 100,000 and there were 58,000 in attendance for our game. Here’s a picture of them right after a score: 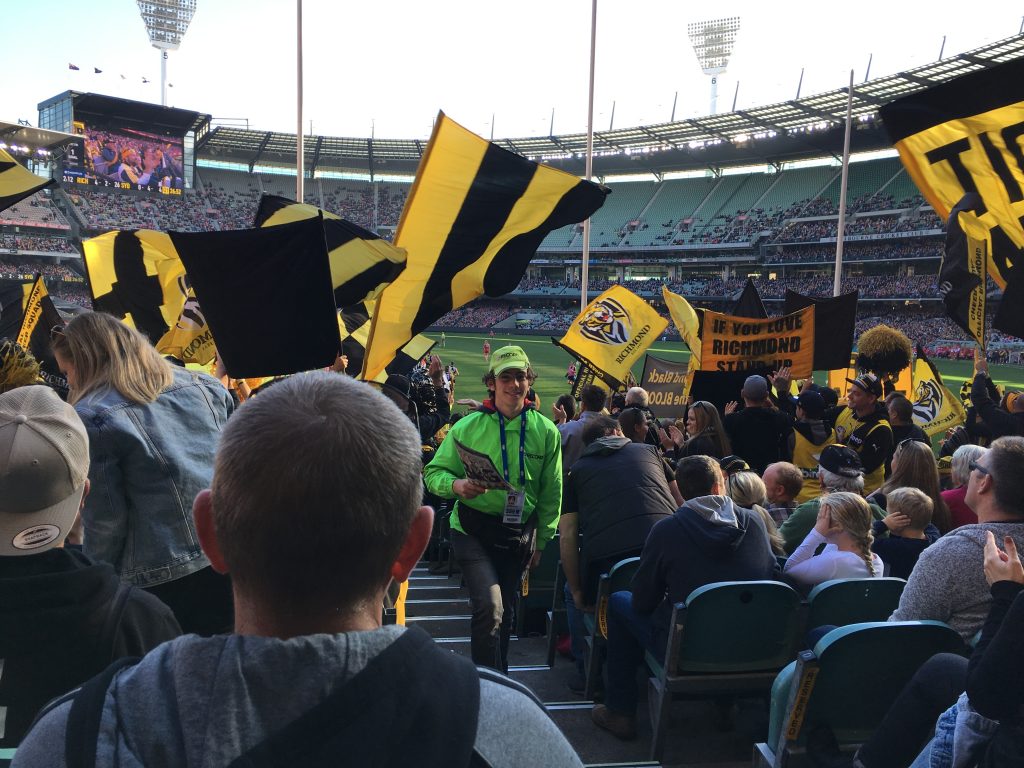 Melbourne is a foodie paradise. Huge markets with fresh produce, cheese and meat, specialty Asian grocery stores, restaurants all over the place. People eat out here a lot and at all times of the day and night. You can walk into a restaurant at 5:00 pm and get dinner, or 3:00 pm and get breakfast. (Quite the departure from Switzerland where between 2:00 and 7:00 there is absolutely nothing doing and you’re looked at like a crazy person for asking if there’s anything to eat.) Rooftop bars and pubs abound. We’ve been testing the pubs because the TV in our apartment doesn’t have cable and Marc HAS to know what’s going on in the rugby and football. They’re very relaxed — you can order food and beer, or not, and the food on offer is often quite good. The other night at a pub we shared a table with a well-heeled woman and her daughter (I assume) who were avidly watching the rugby — New Zealand was trouncing Samoa — while quaffing G&Ts.

They’re into coffee in a way I have never experienced. It’s the usual espresso stuff — latte, long black, short black, and flat white — but also cold brew, filter drip, and other things I haven’t registered because I immediately go for the flat white, which has become my new favorite food. No Starbucks (maybe one) here, but loads of little cafes where people flock for brekkie (smashed avocado on toast and/or eggs) at any time of day. At 10:00 the office workers all go buy coffee. Many of them take their work with them — I’ve seen meetings being held, notes being taken, computers pulled out and figures discussed. My current favorite is the League of Honest Coffee, a couple blocks from our apartment. I sit down, a guy comes over with a bottle of water and a glass, and I tell him I want a large flat white. No worries, he says, and a little while later he’s back with a bowl full of happiness.

The trees are strange and different, and the birds, too. Flocks of raucous lorikeets congregate in the tops of the palm trees. There appears to be an inverse relationship between the beauty of a bird’s feathers and its vocalizations. I haven’t seen any kangaroos yet, but we plan to rent a car this weekend and find some.

While walking around Richmond, a slightly dodgy neighborhood like Baltimore’s Hampden oozing with “local character”, we spied an open barber shop. (It was Sunday afternoon). Marc being in need of a haircut, we went in and waited his turn. It slowly started to dawn on us that this wasn’t your average barber shop. Various stuffed animals (taxidermy stuffed, not plush stuffed) jutted from the walls and perched upon surfaces, most of them wearing rakish hats, some with Barbie dolls astride. There were several posters of attractive vintage women, all with mustaches added on. The waiting room reading included politically correct fairy tales and a comic book of bunny suicides. When Marc went up to have his trim, he was offered a beer. The conversation included AFL, of course, Richmond having lost the match the previous day by a slim margin very late in the game. Here are a few pics: 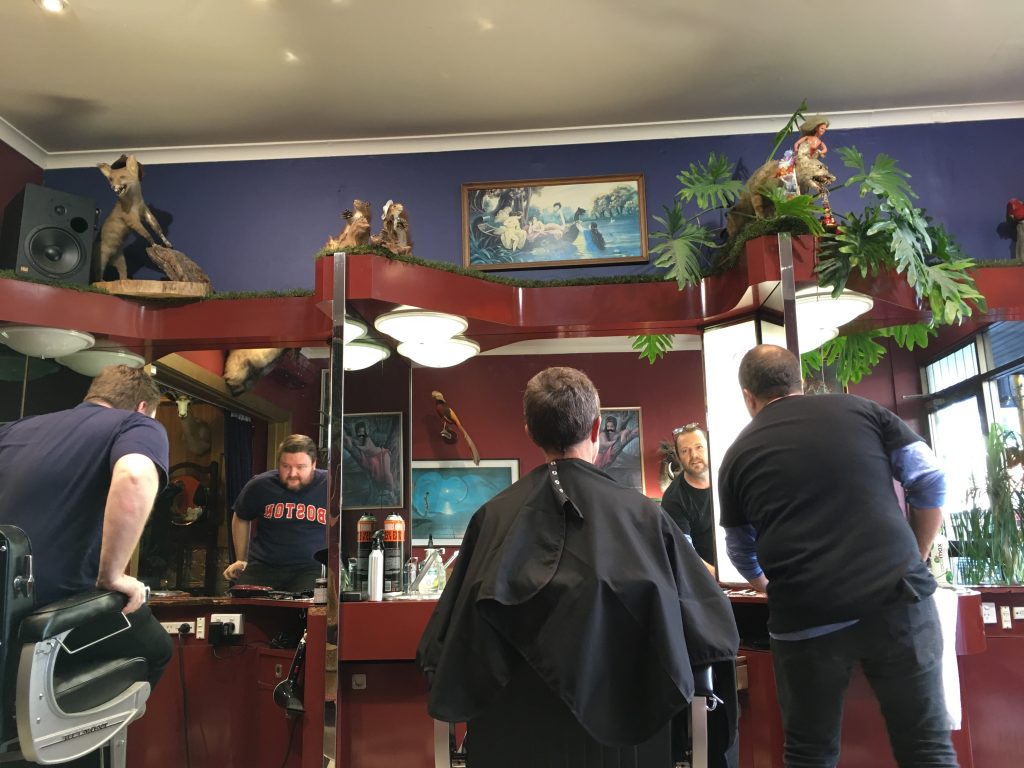 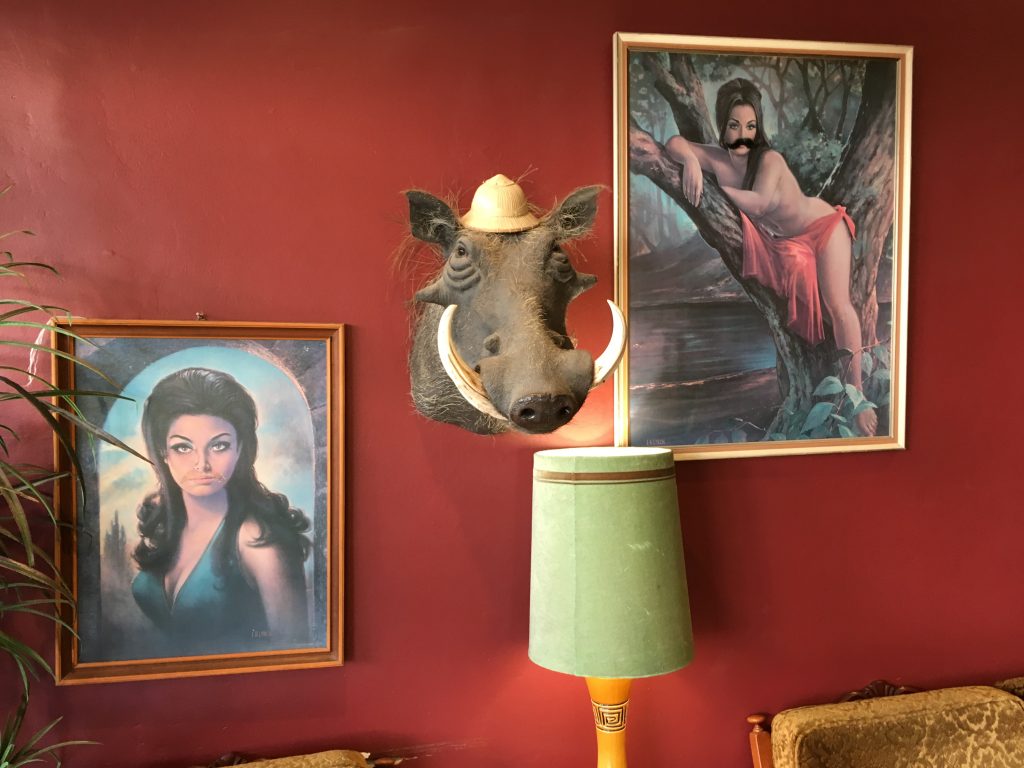 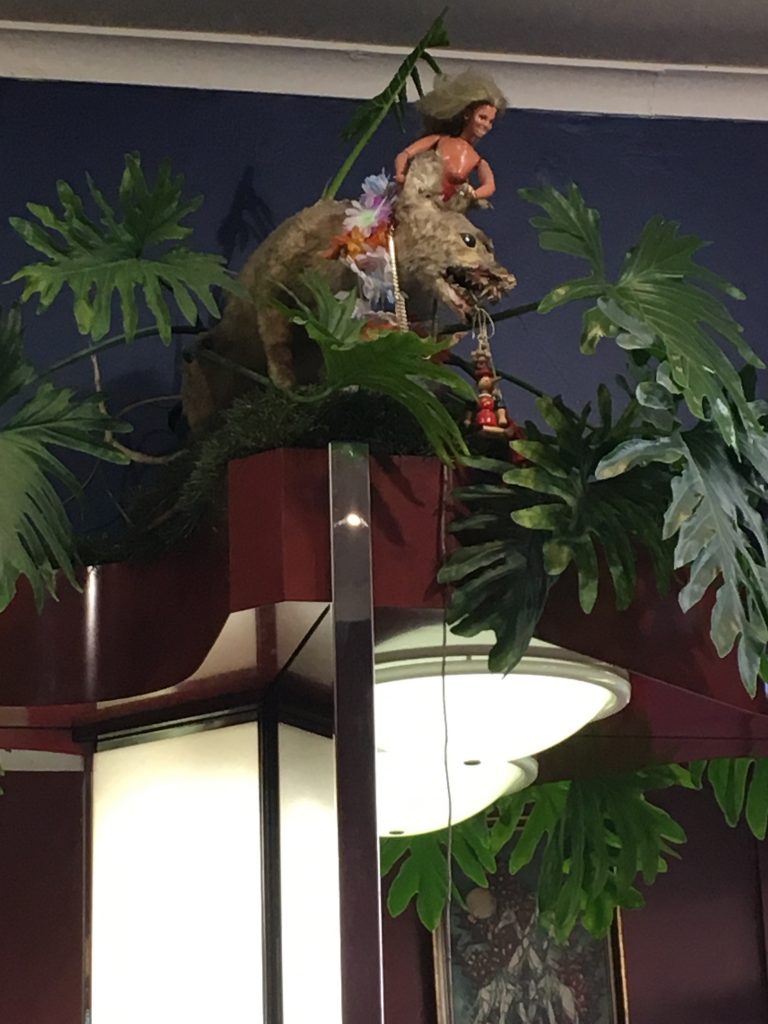 Speaking of Sunday afternoons, I had been worried that things would stop on Sundays here, like they did in Switzerland, but that appears not to be the case, except for the coffee shops in the city proper, which are mainly fueled by office workers. Life goes on. You can buy groceries, go out for a meal, get your hair cut. Phew.

In two weeks we move to a townhouse in a neighborhood a bit to the south called South Yarra. It will be good to have our feet on the ground again, and not up in a high rise. I’ve got my eye on a yoga studio called the Humming Puppy and maybe I’ll take dance classes. I tried a “barre fitness” class here —$50 for 2 weeks and they guaranteed I’d love it — but I didn’t. The women were all so very young, not terribly friendly, and the body-sculpting focus gags me. I don’t need that at this stage – or maybe I do, but I don’t want it. And at this point, I’m not going to pay money to do something I don’t enjoy. I’ll keep looking until I find a vibe like I had in my Vancouver yoga studio, Semperviva. Maybe I’ll do a Yoga Project, Melbourne edition. Namaste, mate.

That’s all for the moment. All about me, sorry. I’ve been doing a lot of reading about neuroplasticity, and I promise I’ll write about it in a future post. Now I have to go get ready to take the train out to Monash and meet all these people Marc is working with for the first time. No worries!  One last picture to hold you til the next post: 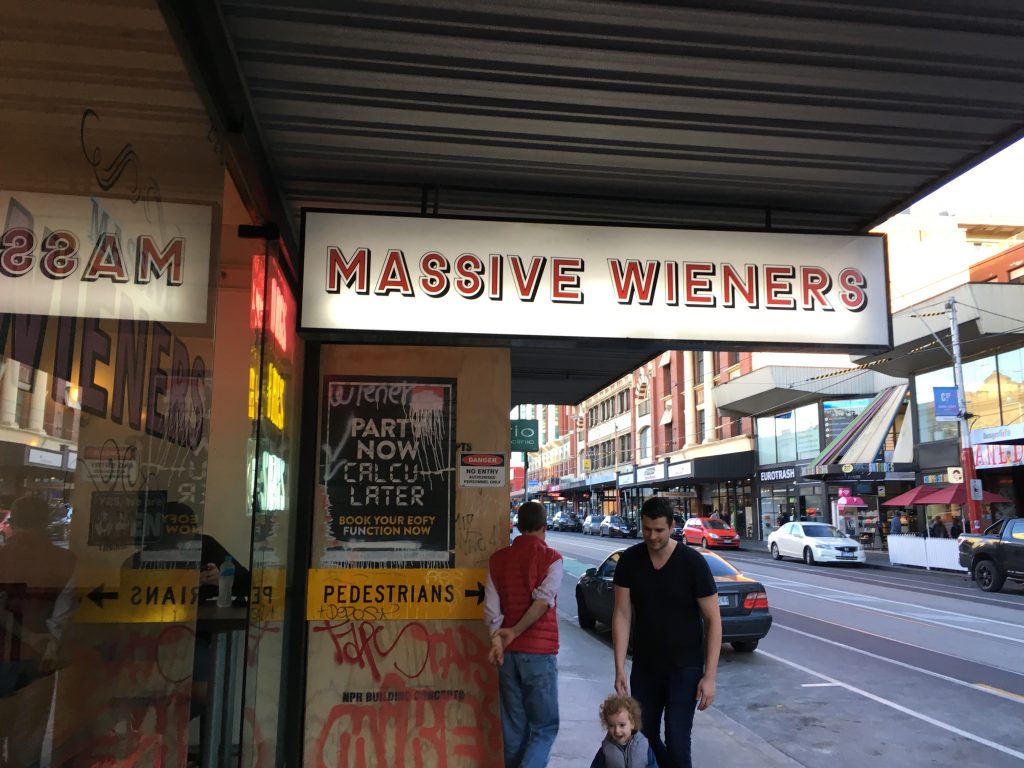 4 thoughts on “Dispatch from Down Under”