Dawn comes and the fog is swirling around our tent. Miniature raindrops —  morsels of the  mist— still patter intermittently on our tent. We want to get to Ollalie Lake today, and it’s 22 miles, so we haul ourselves up and get going.

It’s cold; I wear my rainpants and jacket, plus gloves and my hat. Marc just opts for shorts, and, since his rain jacket is so wet, he stuffs it into the outside pocket on his pack. His gloves are also still soaked. Pretty soon I’m taking my gloves off and giving them to him, because his fingers have gone white. He suffers from Reynaud’s Syndrome, which makes his fingers go white at even the slightest touch of cold. It’s like his body feels a bit chilly and his heart goes ok guys, batten down the hatches. Jettison any unnecessary digits, stat! The blood flow to his fingers decreases and he has to wave his arms like he’s trying to signal a chopper just to get things warmed up again.

Anyway, gloves. Then after another mile of plowing through dripping underbrush on either side of the trail — commonly referred to as “the Full Carwash Effect” —we stop and he puts on his down puffy. Then the carwash continues, but he’s comfortable instead of freezing.

Today we have the much-feared Russell Creek crossing. It’s a wild, glacier-fed torrent bashing down the side of Mount Jefferson—for us at this point still a mystery mountain somewhere up there in the clouds. You’re supposed to get there before noon, because any later and it will get dangerously swollen by the day’s snowmelt. Earlier in the season there was a snow bridge across it, the remnants of which I see as we approach. That’s clearly no longer an option.

We get there and on the opposite bank there’s a young woman sitting, changing her shoes, and a burly guy. Great. We have an audience.

It doesn’t look too bad. The water is fast and deep, but there are rocks all the way across. One of them wobbles under my foot as I put my weight on it, and if it hadn’t been for my poles, I’d have lost my balance and fallen in. Phew. We’re across.

The couple is cheerful, from the Netherlands. She fell in and is changing her socks. He’s, oddly, smoking a cigarette. First smoker we’ve encountered on the trail. We carry on. As we head up towards what the map tells us is “Jefferson Park” there is a shifting of the light, and the clouds begin to part a bit. A sunbeam or two makes it all the way down to the ground. For a fleeting moment I get a sight of a huge mountain with patches of snow still clinging to its flanks. That must be Mount J — and I can see why this might be a major hiking destination. Unfortunately the clouds close back in and the mountain stays shrouded pretty much the rest of the day. 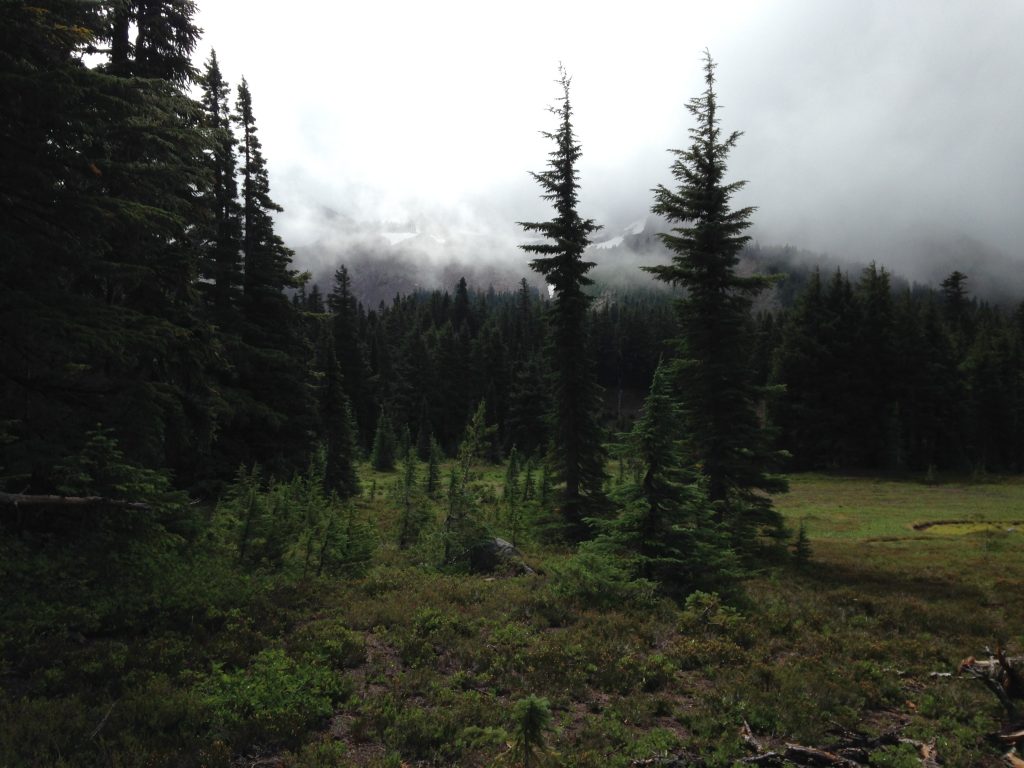 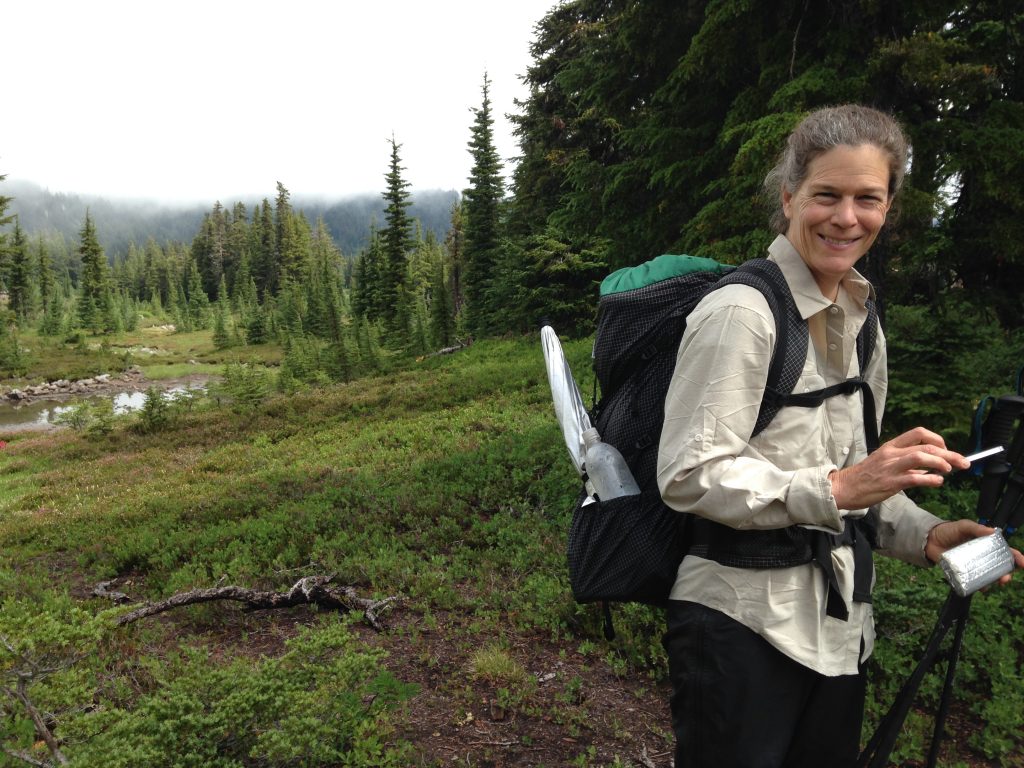 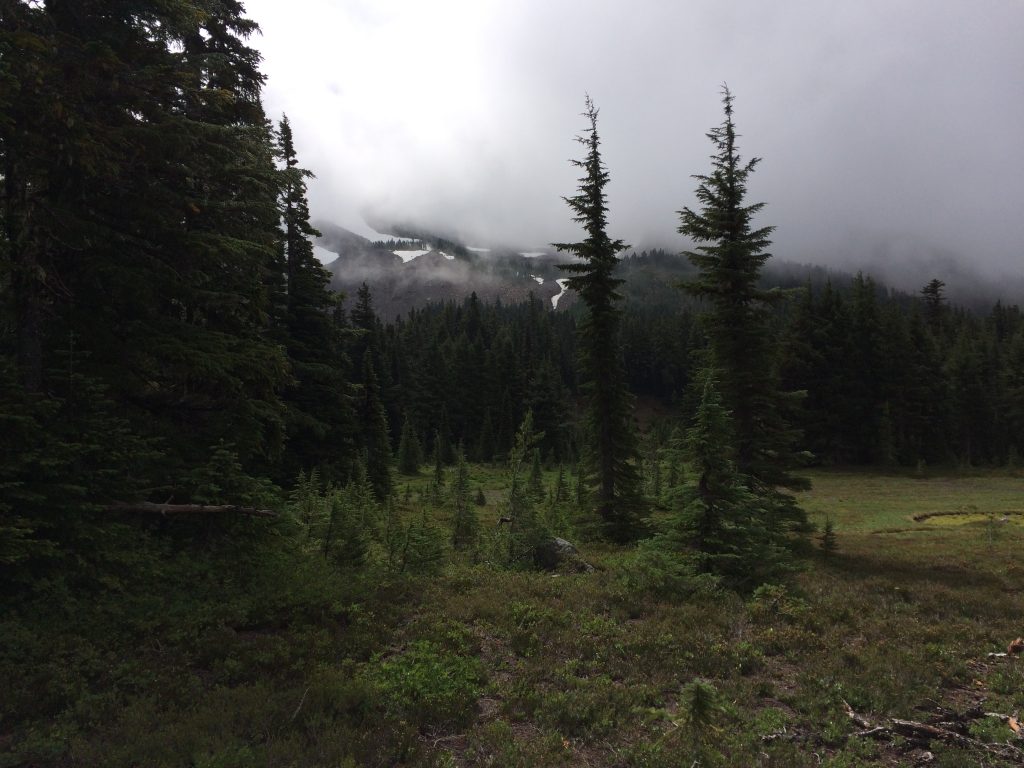 Back in Sisters I noticed on the website that a couple of cabins at the Ollallie Lake resort were still free, so I’m hoping we can rent one tonight and dry out our gear. They’re minimalist — no indoor plumbing — but still perhaps a fireplace.

As we make our way out of Jefferson Park and up the pass, who should we encounter but Bright and Story, the couple we met on our 26-mile day out of Crater Lake! So fun to see familiar faces! We start chatting about gear and maps. They have a car parked at the lake, so we’re headed for the same spot. Bright tells me that Ollallie means huckleberry in the native tongue. There are plenty of these, which to my eyes look and taste pretty much exactly like wild blueberries. I guess huckleberry bushes are taller than blueberry bushes.

Pretty soon we reach the pass, which is shrouded in fog, and start down the other side across a snowfield. We pull ahead, as Marc’s not really in a chatty mood and he’s on a mission to get to the lake ASAP and secure a cabin. I also have a hard time talking with people while hiking because I can’t hear them very well. 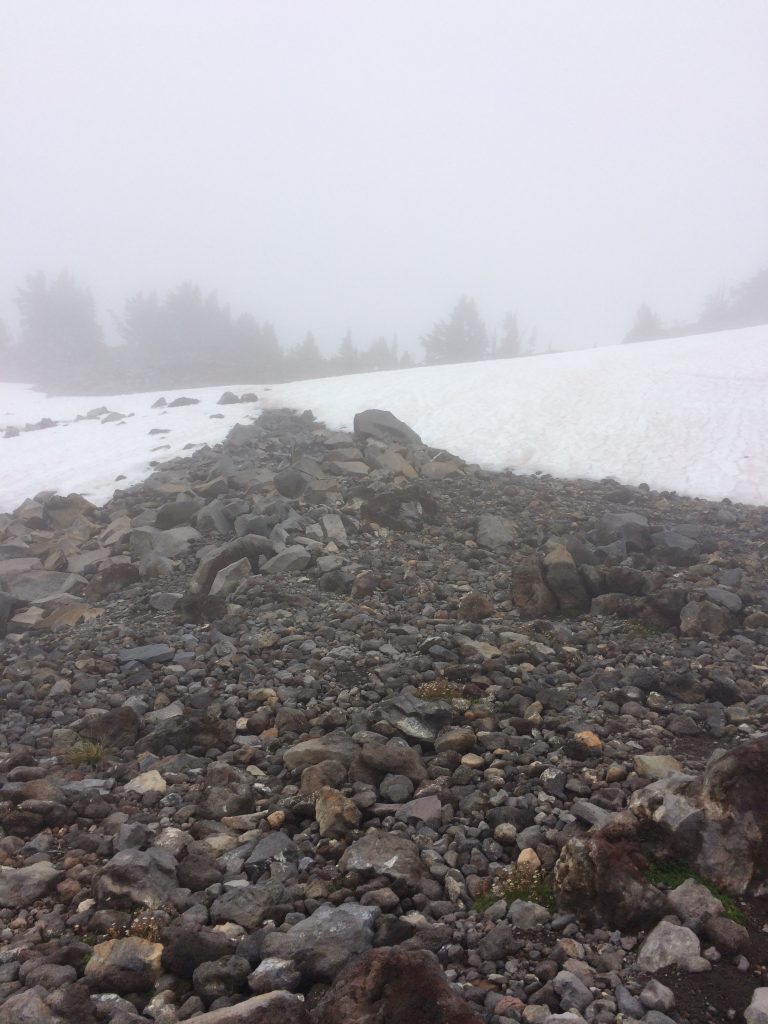 We can tell the sun is just up there, almost breaking through these clouds. It would be so nice for it to come out and dry us off!

By the time we get to the lake it’s already about 5:00, and there aren’t any cabins left. But there are tons of camping spots in an area near the store, and so we stake claim to a spot, set up our tent and put our fly up to dry on a line strung between two trees. There’s a picnic table where people are congregating, and we see All Right – the guy we first met without knowing it at Bobby Lake and then again at Elk Lake. It’s fun to catch up with him while we all make our various dinners. 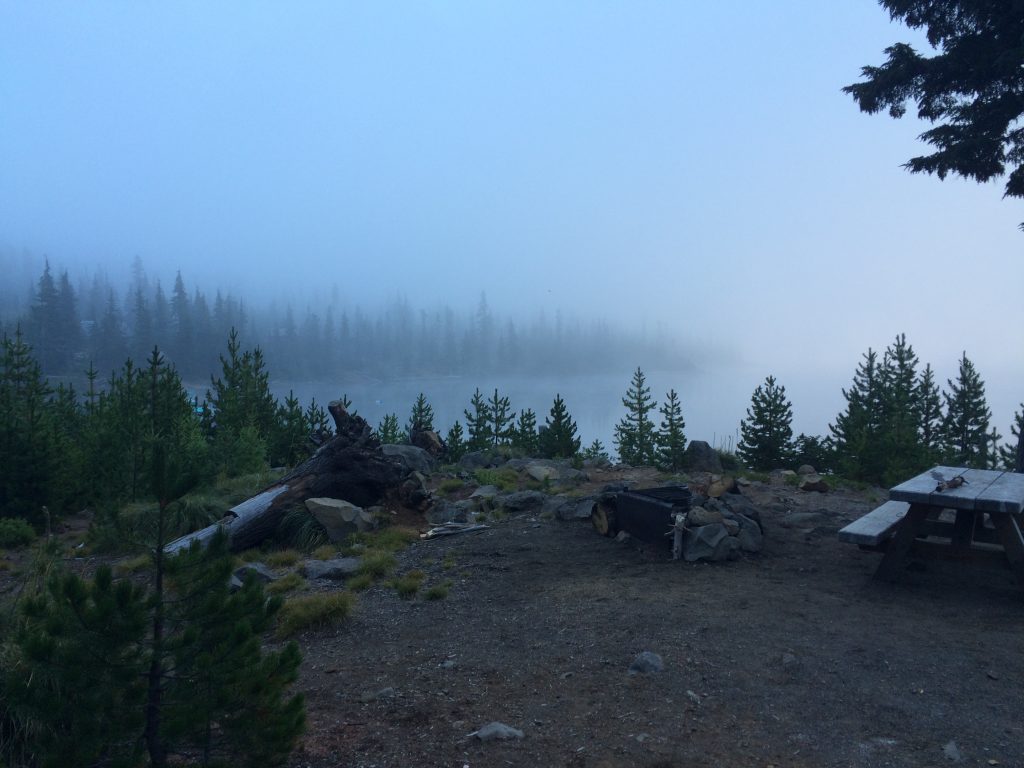 Several other groups of hikers join us in the campground— a group of three including a woman from New Zealand, a guy from Belgium and an American (more about them later!), the Dutch couple, a couple with a dog who we’d seen before near MacKenzie pass, and another duo who pulled out collapsible chairs. Imagine carrying those. What’s the point, I think, when you can just squat or sit on a rock?

During the night I poke my head out of the tent a few times and am ecstatic to see stars. It’ll be clear tomorrow! The weather forecast had been right— just the one storm. It would have been nice to be in a cabin with a fire to warm us up and dry out our gear, but this was fun, too, to meet all these people and hear about their hikes.