In the morning, Marc wakes to the sound of a 747 flying overhead, only to realize it’s just the mozzies swarming around our tent. Bless him, he gets up and cooks our oatmeal and tea and coffee and brings it to the tent so we can eat unassaulted.

Again today we encounter only one other hiker on our way down to Shelter Cove, a day hiker. She says it’s probably the mosquitoes keeping people away. Ya think? We hike the 9.7 miles without stopping. Here’s what it was like (plus a morning shot of me in the tent): 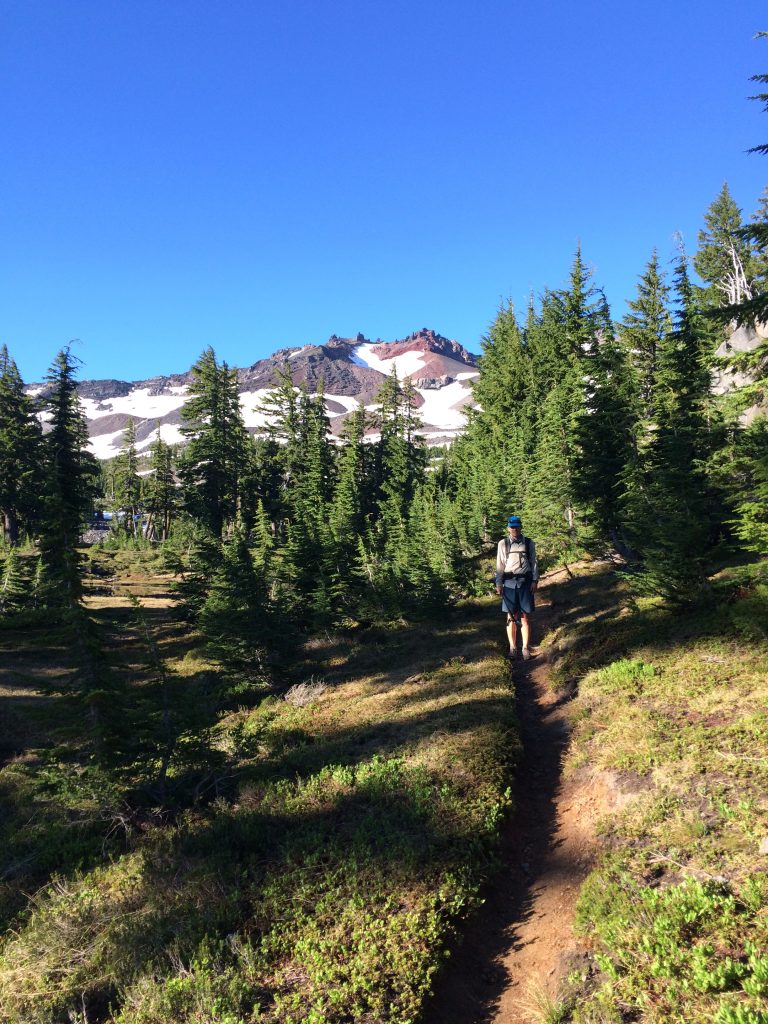 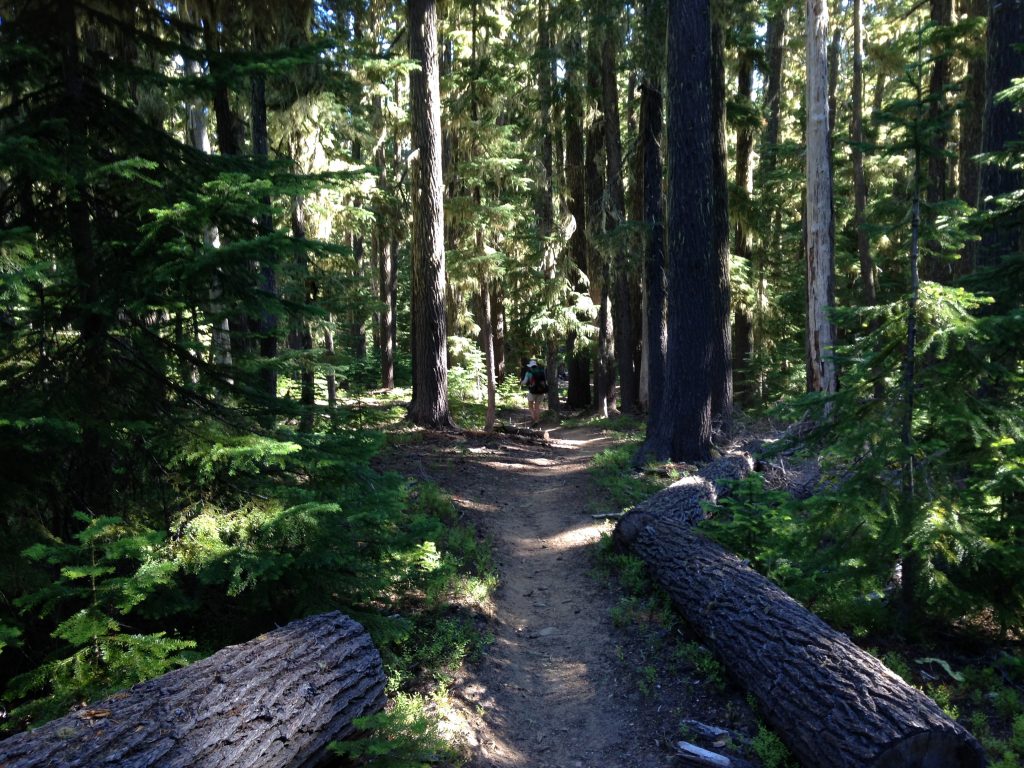 At the turnoff, there is a “dirt road”, not traveled by vehicles. There are blowdowns, craters, and then it ends abruptly at a railroad track and continues on the other side. We hit the real, paved road into Shelter Cove and hike down it for a while, past RVs and little kids riding around on bicycles, to the resort and its store.

Outside the store there is an area that’s been set up for hikers, and there are lots of them lounging around, charging their phones, sorting through boxes, drinking beer. A few young, lean, male tru-thru specimens (the scraggly beards and I’m too cool for words demeanor are a dead giveaway) and other, clean cut and eager section hikers. The woman who told us she was doing the Oregon Skyline is there, wearing a dress, fresh from a shower. There’s a skinny Asian woman, an old man. Where did all these people come from?

While Marc heads inside to fetch our resupply box, I strike up a conversation with a guy called Bankshot, a friendly tru-thruer. He’s fashioning a kind of head net using loose netting, his hat, and some flesh-colored leukotape. Marc doesn’t appear, so I go in. There’s a menu with about five hundred different permutations on the latte or cappucino, but nothing else in the way of a restaurant. The store sells all kinds of fishing gear and clothing that reads Shelter Cove Resort, in addition to the usual suspects like Pop Tarts, candy, and other things RV campers are likely to run out of. I find an ice cream bar. Marc gets a double espresso.

The staff are serving RV customers and kind of ignoring Marc. In the end he manages to pay $10 to get our UPS-delivered box and we can organize our resupply. In silent agreement we decide to pack up and get out of here. This is the kind of civilization we don’t really like. I’m deeply disappointed in the lack of a restaurant, of a cool shady place to enjoy a beer while looking out over a lovely lake. That was what I’d been imagining these last 10 miles. Instead we get a couple of hot picnic tables off to the side (hiker trash area!) and a bizarre espresso-drink-focused gift shop.

I give my paper maps to some grateful section hikers, ditch a head lamp (why did I bother when my phone AND my Anker charger have flashlights on them?) and various other unneeded things. Ahead there’s a shelter that I’d read about before our hike, the Maiden Peak Shelter, which is supposed to be really nice, for a shelter. On Guthook’s app there is a water drop in its description, but there aren’t any comments about the existence or nonexistence of a pump. I’m thinking it would be a great mosquito-free place to spend the night. In my mind I picture a Swiss cabane, or something like it. Bankshot has to wait for his package to arrive and I tell him we’ll save him a spot in the shelter.

On the trail again the tiny Asian woman passes us and asks us to take her picture, then takes ours. Her trail name, we learn, is Mickey Mouse. We leapfrog with her all afternoon. Here’s her picture of us: 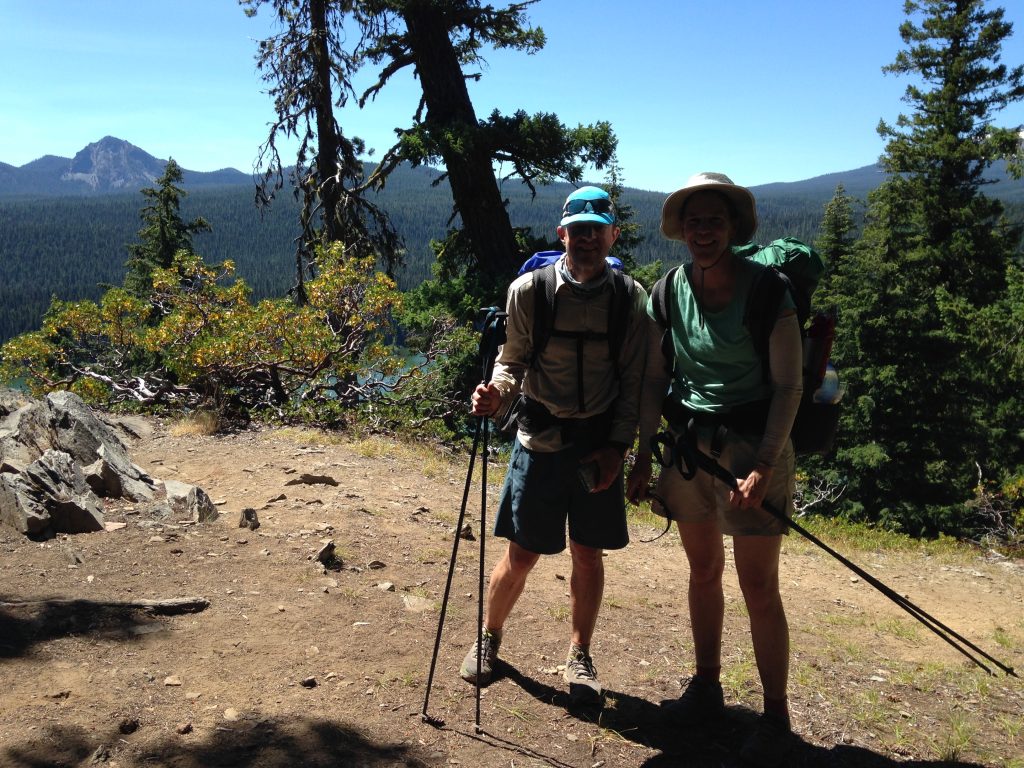 We cross paths with some SOBOs (that’s trailspeak for SouthBounders) who tell us there’s no water at the shelter. But there’s a drop on the app! They must not have looked hard enough, I think. We pass and pause at lower Rosary Lake, where there are some rowdy young boys camping. We’re near a road, so it’s easy for people to get in. 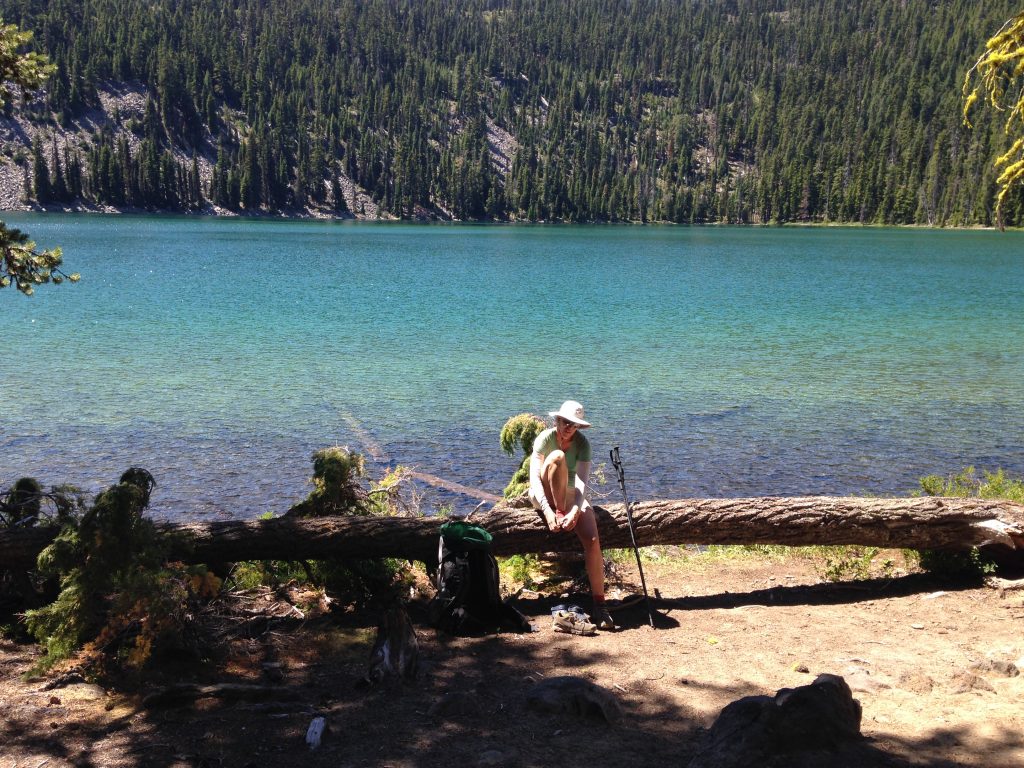 It would be nice to swim, I think, but not with all these people around. Finally after hiking 9 miles from the resort, we get to the shelter.

Let me just say this: perhaps by Oregon backcountry standards it’s clean and nice, but a Swiss Cabane it is most definitely not.

There is no water. The shelter is dusty and the air close and stale. There are holes in the roof. Mosquitoes will definitely find their way in here. There’s no friggin’ way we’re going to stay in this place. Mickey Mouse comes in after us, looks around, and signs the register with her trademark Japanese flag.

I’m tired, probably because we hiked 10 miles without stopping this morning in my eagerness to get to the amazing non-existent restaurant at Shelter Cove. And now we’re going to have to carry on to the next water source, which appears to be a place called Bobby Lake. I hate it that Marc was right about the shelter. My mood takes a downward dip.

The one redeeming thing about going on is that I can at least tell my brother Rob, who as a child was called Bobby and in adolescent years suffered extreme shame from our constant reminders of that fact (among others), that I camped at Bobby Lake.

On the way down to the lake, we come across some search and rescue types assisting a young woman on the side of the trail. A husky is sitting next to her. Marc asks if there’s anything we can do, and the rescue guys say no.

At Bobby Lake, we find a gorgeous tent site next to the water. There’s no one here and I quickly strip to my undies and head into the water. This wonderful swim makes up for all the disappointments of the day. We wash out our clothes. That’s when I notice a strange pile of discarded clothing, food, and a small fuel canister sitting on a log near the lake.

Marc is upset because I talked him out of buying a fuel canister at the store in Shelter Cove. I think he carries too much in his pack already. In the meantime, he has calculated that we will run out after another two days, and he should have ignored me and bought a canister anyway. But here is a canister! It’s almost full! Trail magic strikes again. We decide to hang the abandoned bag of food with our food tonight and then take it out to the main trail tomorrow and put a sign on it for people to help themselves. (It is never a good idea to leave food sitting around (bears).)

We also discover that the lake has a guardian. This toad, which I named Bobby, sat, unmoving, the whole time I was swimming and rinsing out my clothes right next to him. 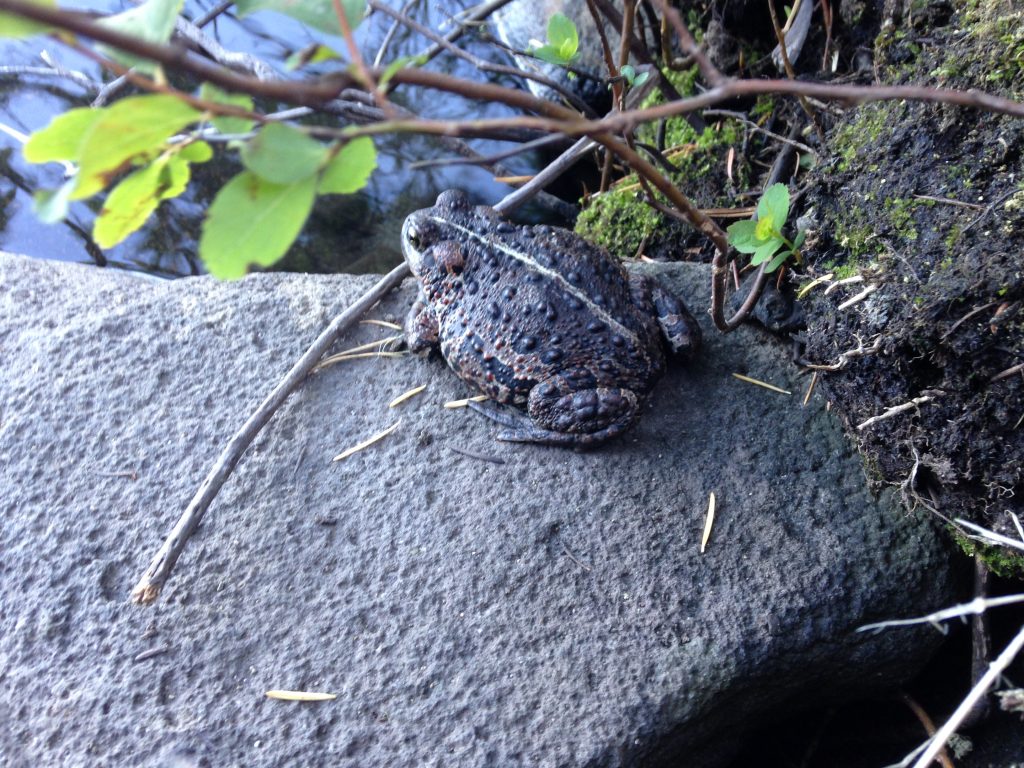 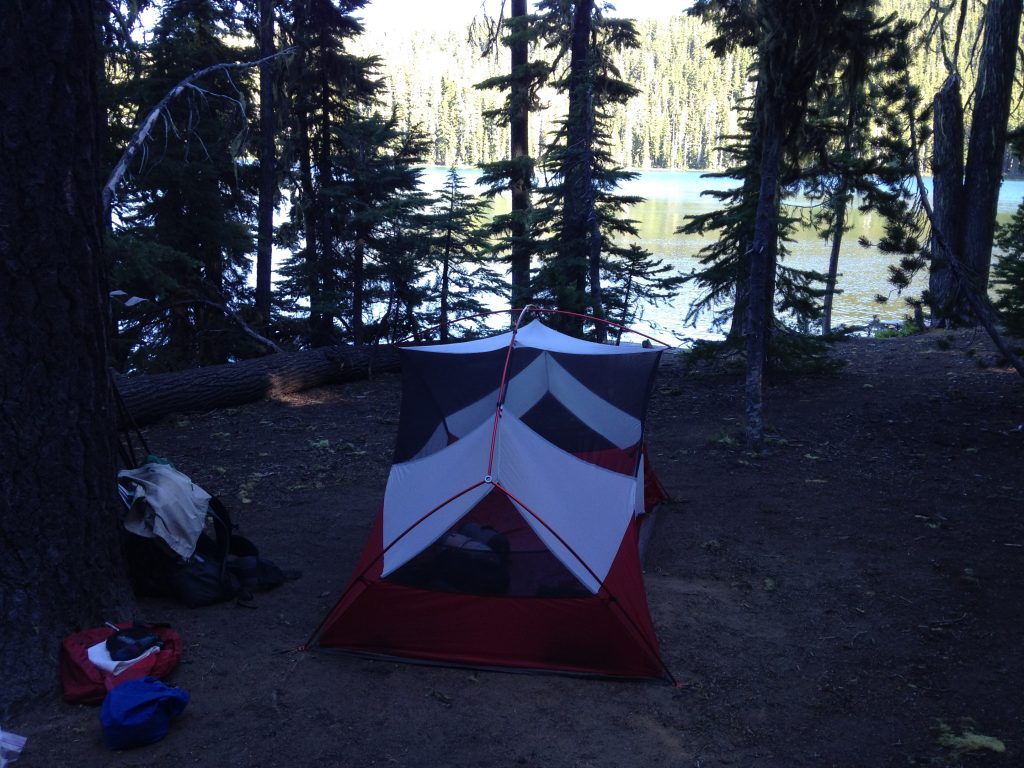 Two more parties of two arrived after we did, one father-son section hiker team and a couple of women we didn’t talk with, then much later, as we were drifting off, a lone hiker who cooked his dinner and then set up a tent right near ours.

The day had been a bit of a bust, but only because I had a whole ton of expectations that didn’t materialize. Once I loosened up and stopped wanting things to be a certain way, and being disappointed when they weren’t, I was okay again. I was even fine with the fact that Marc was right once again, and Bobby Lake was infinitely better than that stupid shelter.

And now I have a Snickers bar (which I’m going to take from that food bag we found) in case things get really rough.