Today is going to be an easy day! It’s less than 40 miles to Santiam Pass, and only about 20 to the Lava Camp campground at MacKenzie Pass, where I think we’ll camp tonight. We start off bright and early, hiking through one gorgeous flower-studded meadow after another, watching the South Sister slip by us on the right and the middle Sister come into view.

Leaving Mesa creek in the morning: 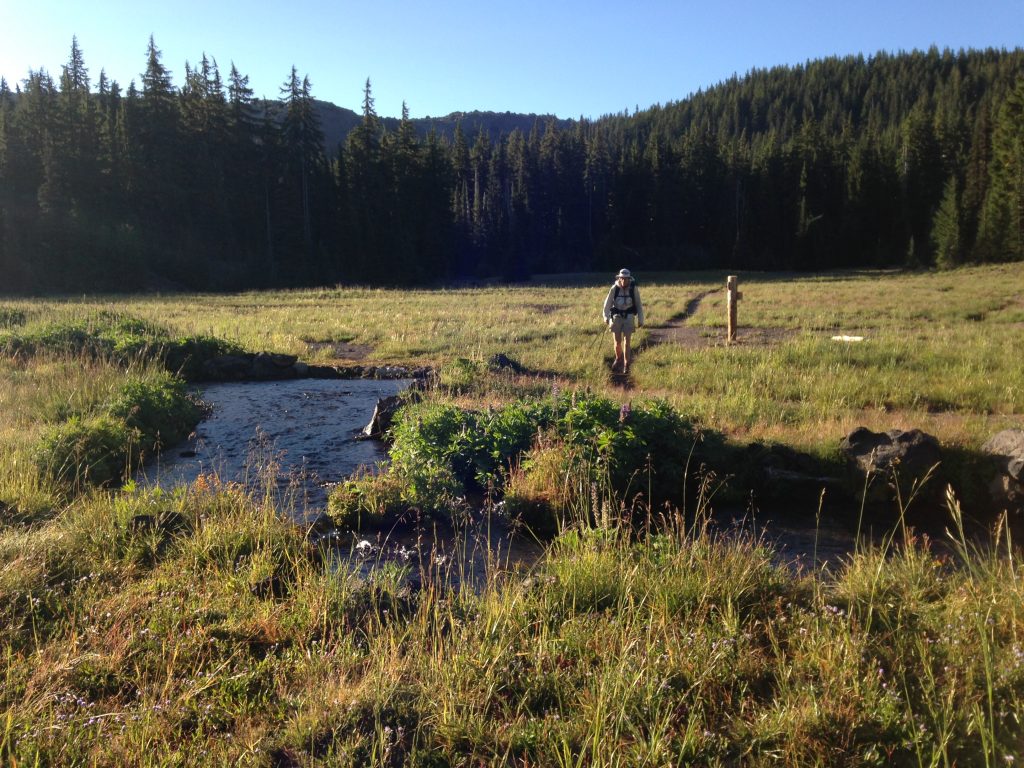 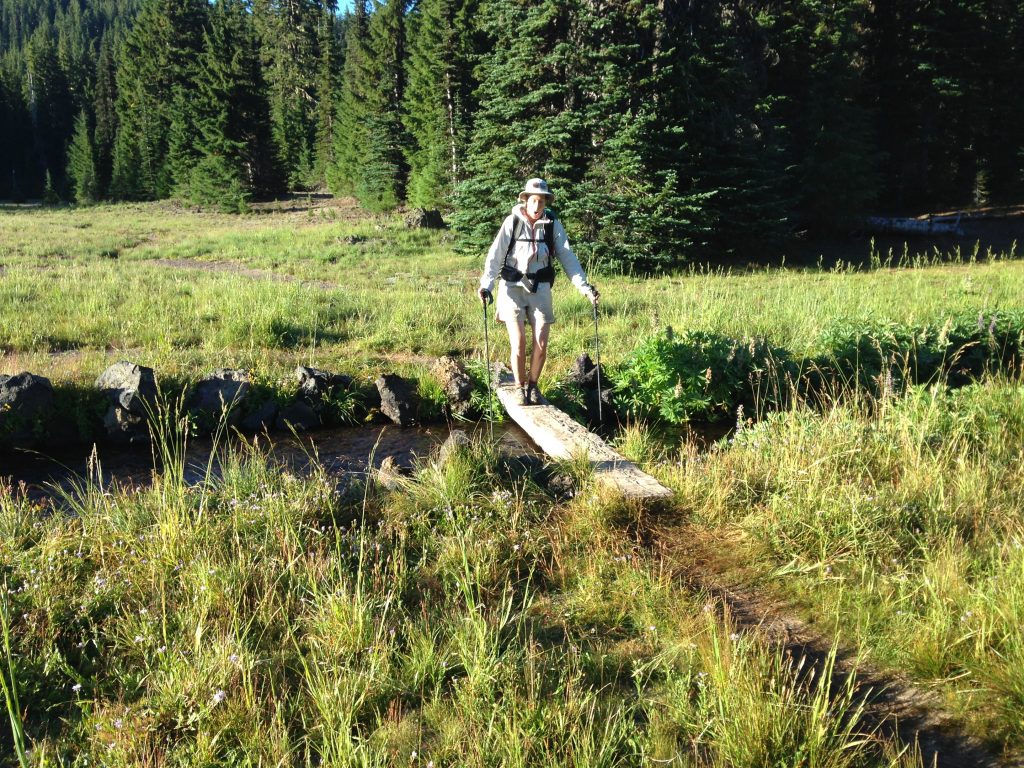 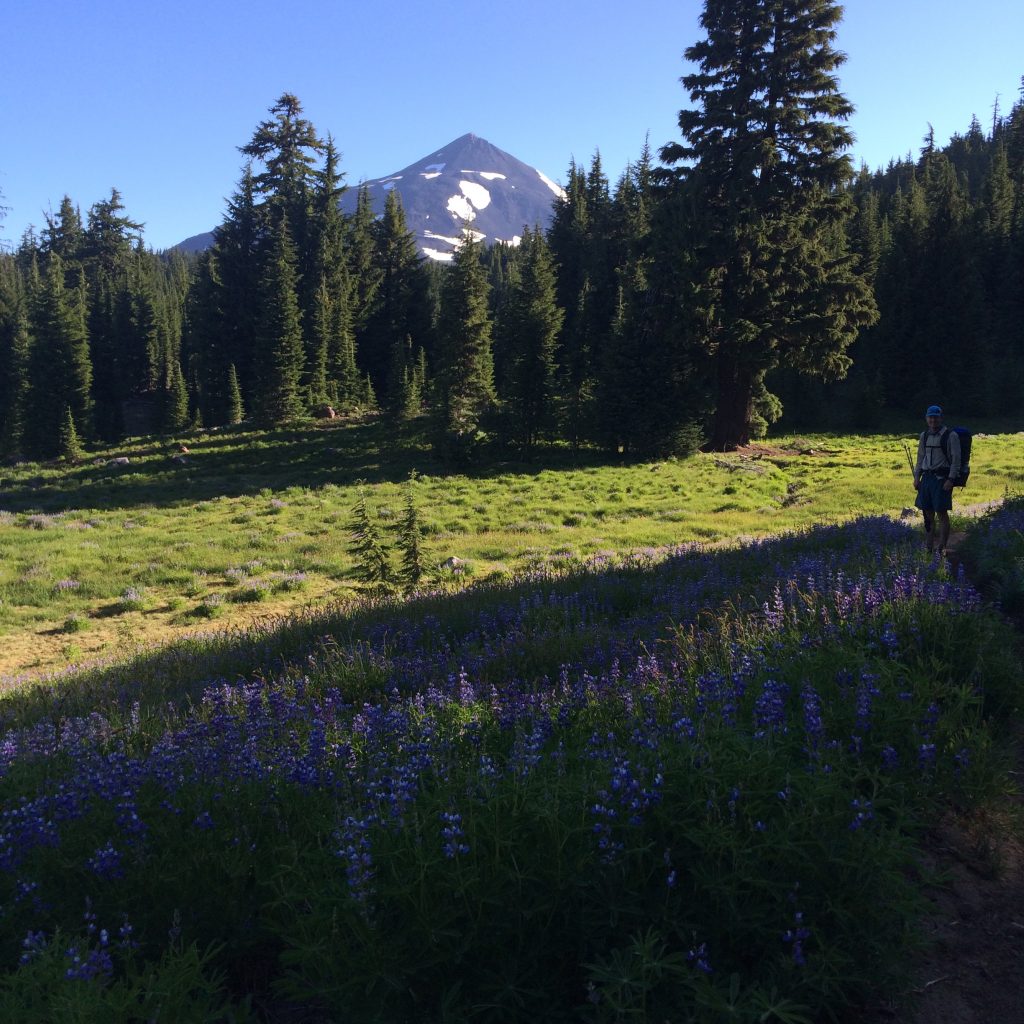 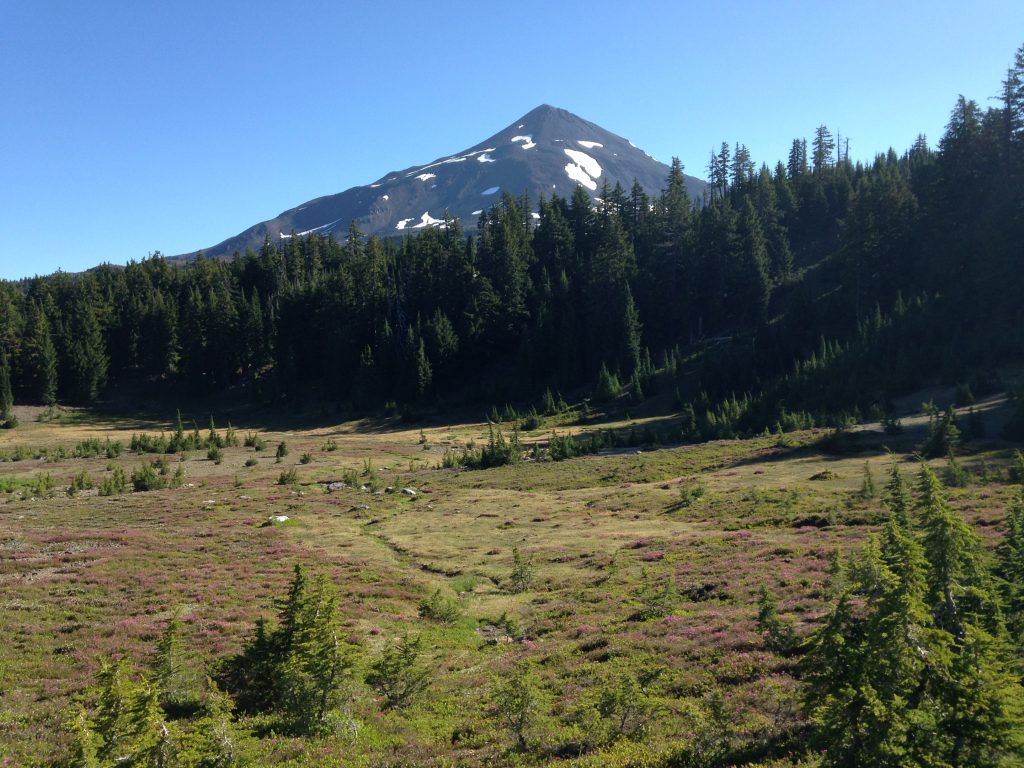 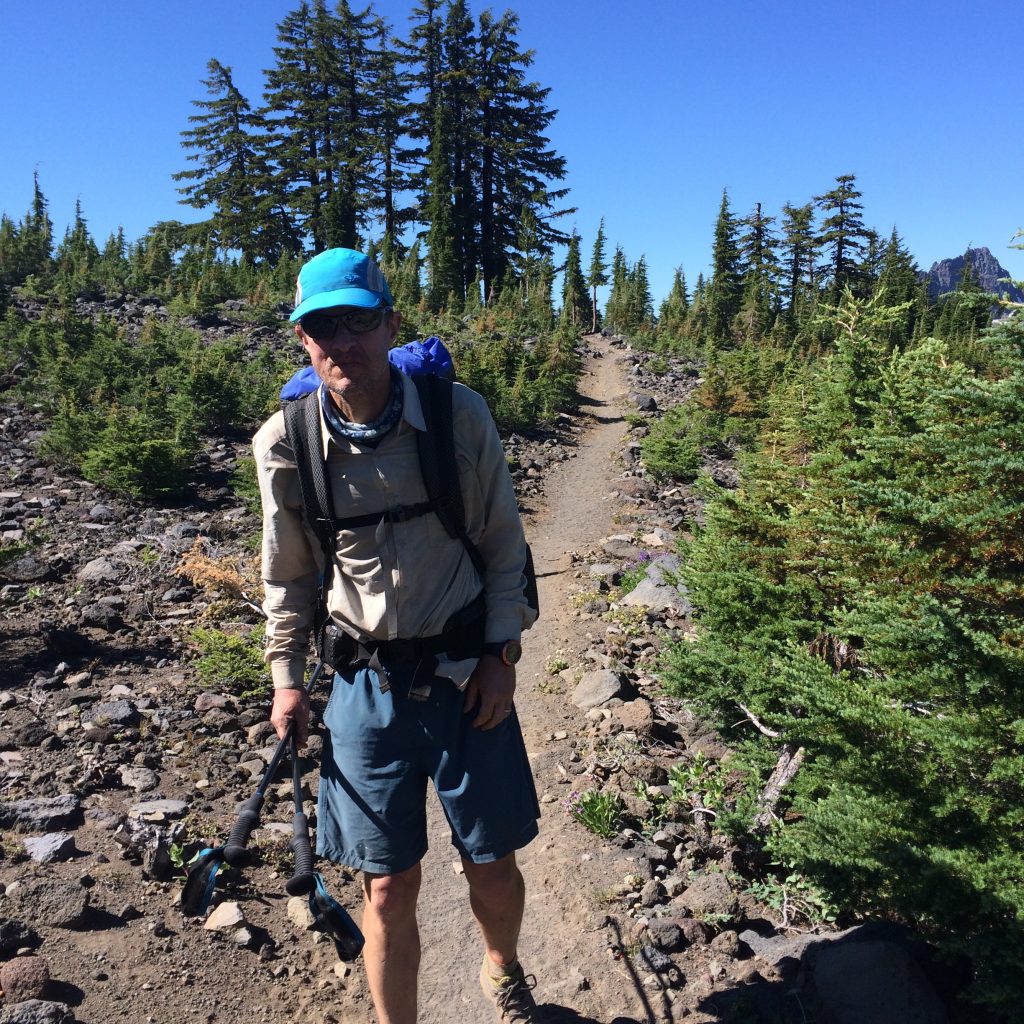 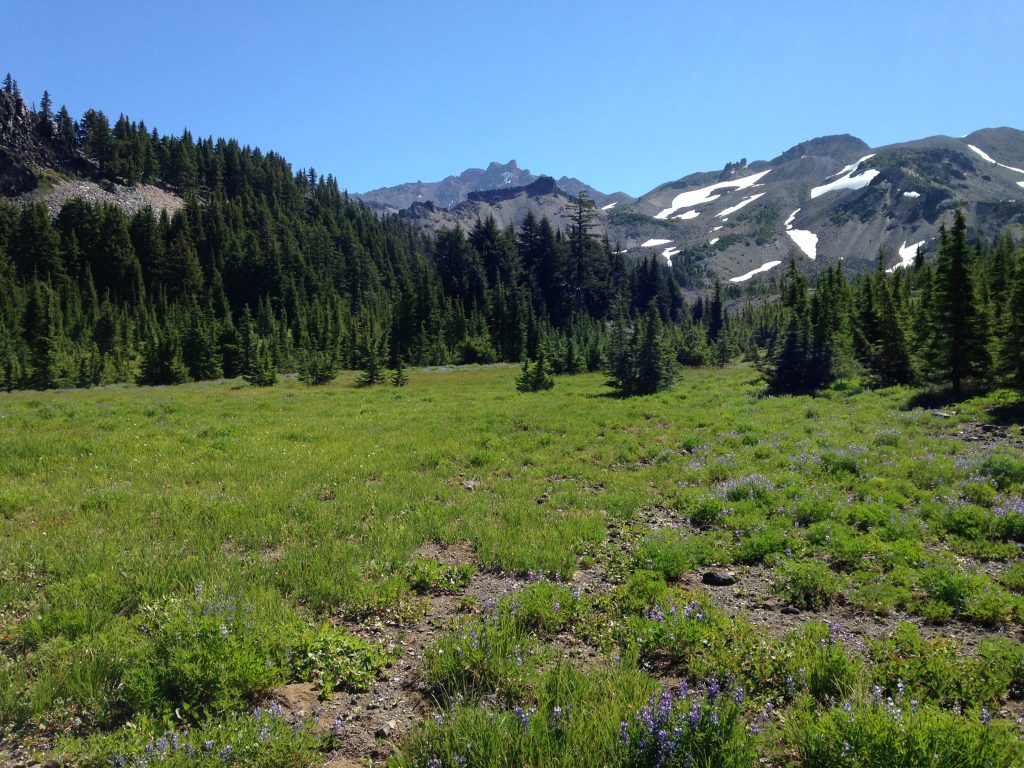 We pass a father-son duo huffing up a hill, and stop to chat a bit. They’re out for a few days’ backpacking, and are in fact already, at this early hour, pretty close to their destination at Obsidian Falls.

Then we pass that strange duo of the Canadian-Mounty lookalike and Holly Hobbie in the sunbonnet – again! I forgot to mention earlier, but we had crossed paths with them between Elk Lake and Shelter Cove again, as well. This makes three times that they have gone by us in the opposite direction. Marc comments to Boy Scout: Huh! Nice to see you again! And the lady replies And it’s not the last time!

Weird. When, as expected, Holly Hobbie lumbers round the bend a few minutes later, carrying her stick and gallon of water, I ask the burning question. Why do we keep running into you two? She explains that they’re working their way North on the Oregon PCT, hiking it in southbound sections, using two vehicles. (I.e. they leave car #1 in Shelter Cove, drive up & leave car #2 at Elk Lake, hike south to S.C and retrieve car #1, drive car #1 up & leave it at MacKenzie Pass, hike south to car #2 at Elk Lake, drive car #2 up to Santiam pass, hike south to car #1 at MacKenzie, and so on up to Cascade Locks.) Complicated. Seems to me it’d just be easier to do the normal resupply technique.

We’re about to enter a special, permit-only zone called the Obsidian limited entry area. You have to stay within 100 feet of the trail, no camping, no wandering around, do not pass go, do not collect $200. Non-PCT hikers have to go through serious rigamarole to even enter this place, so I’m wondering what all the fuss is about. I know it’s a volcanic area, but I haven’t seen any obsidian on the ground yet. I grew up in New Mexico, where you see it from time to time.

Then I see a piece of hard black glass rock on the ground. Then another. We cross the boundary into the permit-only zone, and I see this HUGE rock next to the trail: 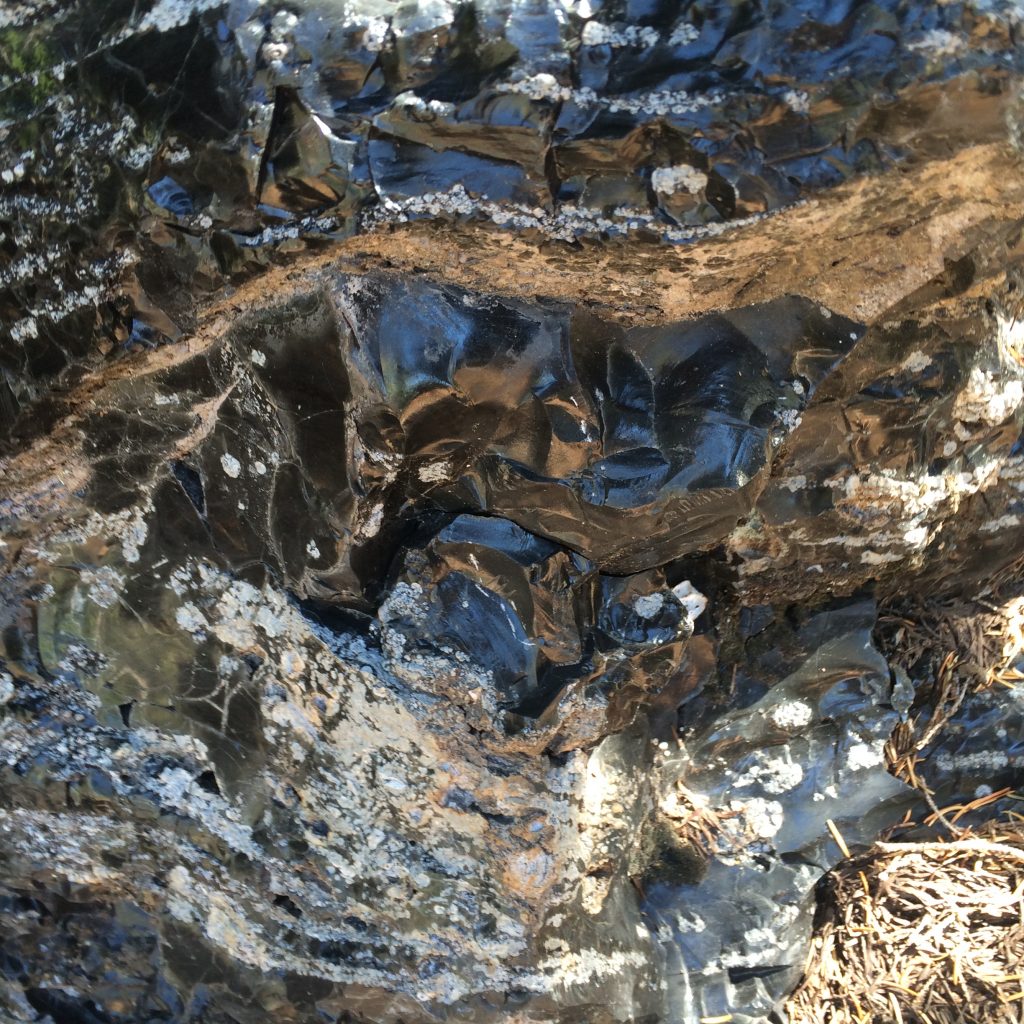 You can see the blue of the sky reflected in the shiny black rock. After a while, we come to Obsidian Falls, which are actually much more impressive than this photo would have you believe: 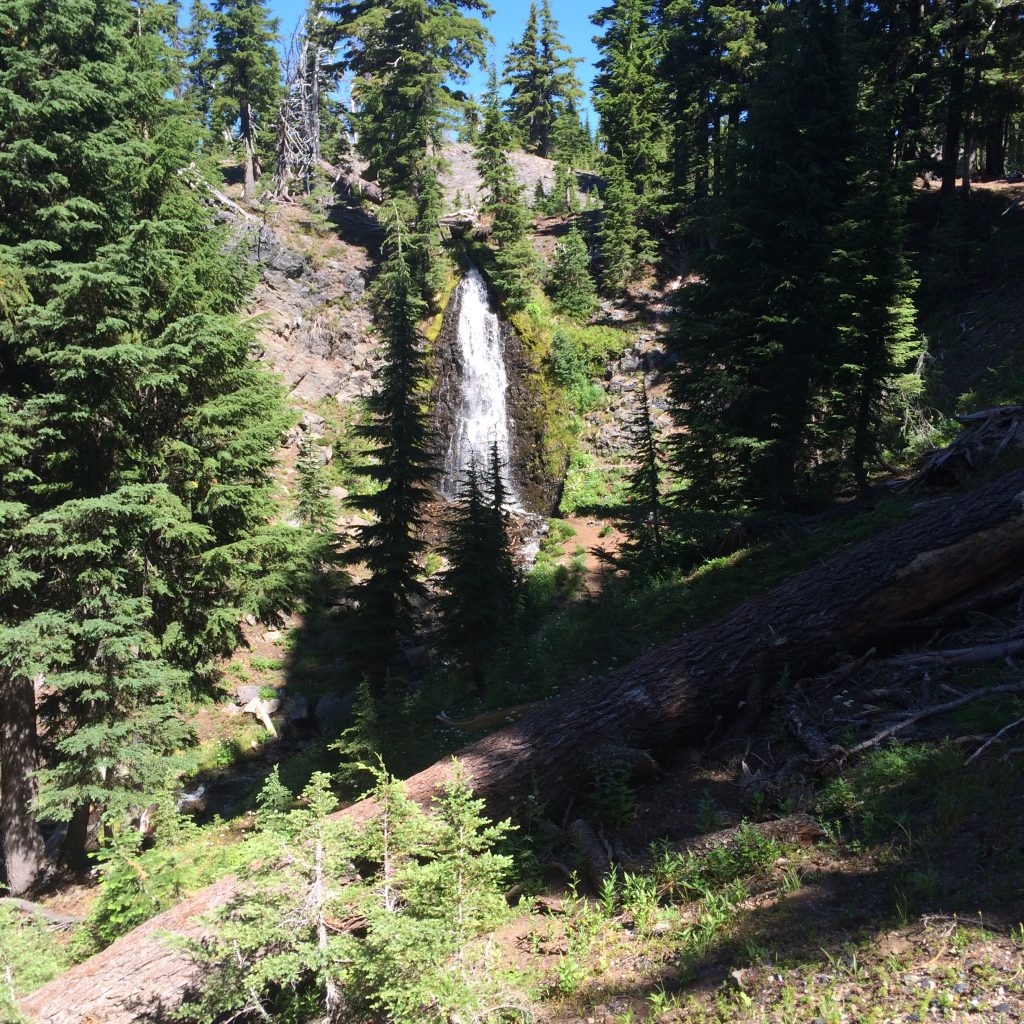 After the falls, we cross a lovely creek and then the wonder of this place starts to sink in. There are shards of black glass everywhere. Huge rocks of it, small stones, fields of pebbles, whole veins in the hillsides. This place is covered in melted rock. It must have been a primo destination back when Native Americans used obsidian to make their arrowheads. It feels like sacred ground. I can see why it’s set aside, why people can’t just come here in unlimited hordes and muck around, taking rocks out and stomping across everything. 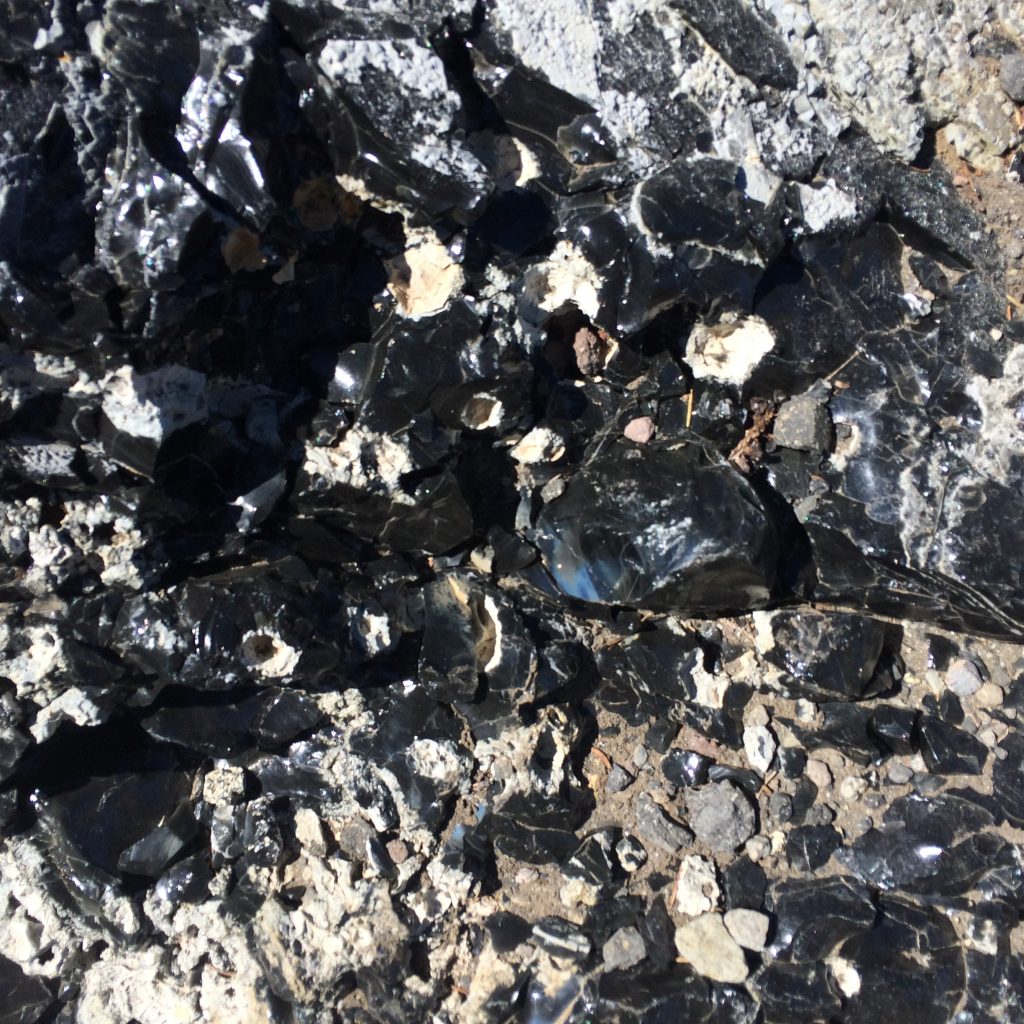 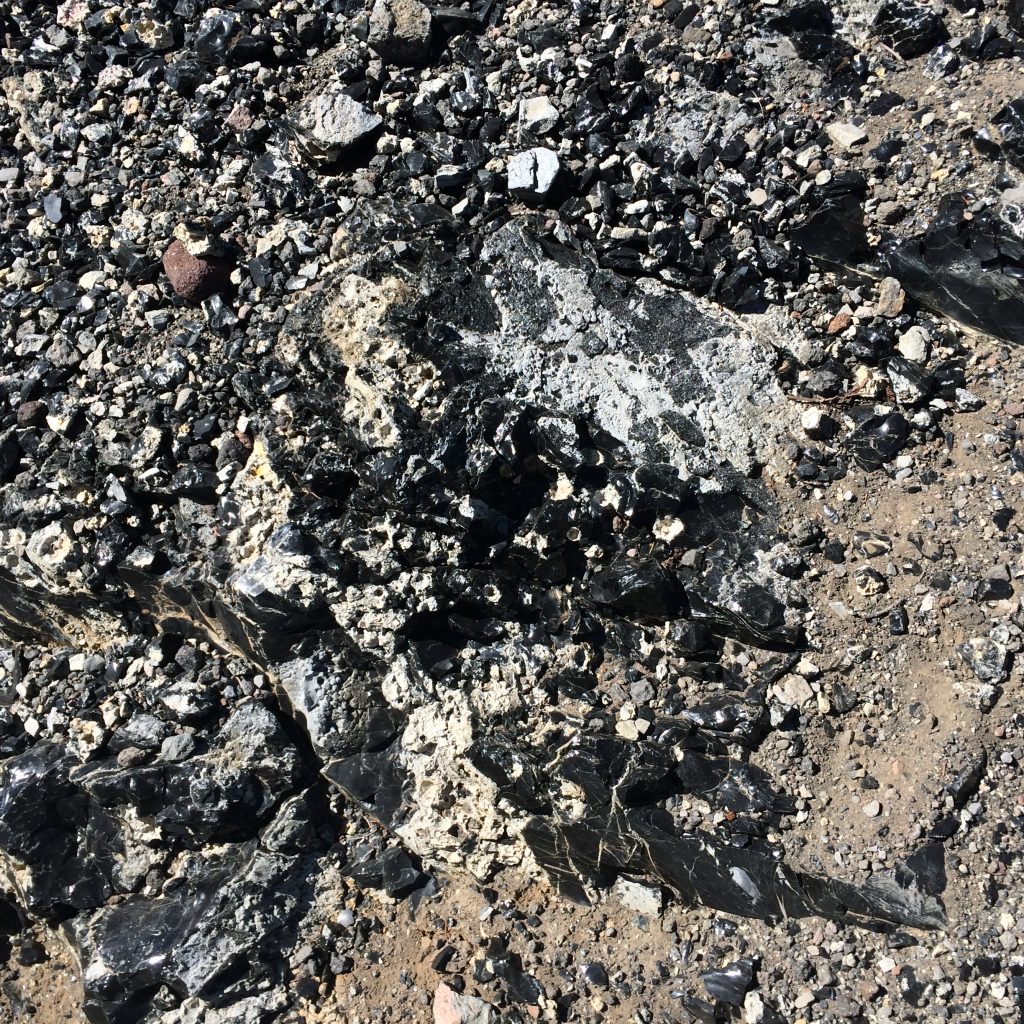 My pictures can’t do it justice. Suffice it to say, I’m duly impressed. Near the northern boundary, as we switchback down towards Glacier Creek, we pass a gaggle of older backpackers going in the other direction, huffing and straining under heavy packs. It’s so easy to tell thru-hikers from backpackers. No thru-hiker I ever met carried a “water bottle” like a Nalgene – and pretty much every backpacker did. Thru-hikers’ packs are usually pretty small and compact, and they don’t wear hiking boots, either. Funny how they still don’t have twisted ankles, even after almost 2000 miles of hiking…

I digress. We get down to Glacier Creek, and there are two stragglers, older ladies sprawled out on the grassy banks. We join them, and I quickly take off my shoes and plop my feet into the water. This creek is sublime — flowers along the banks, glittery cold water, a total lack of mosquitoes, some lovely orange butterflies dancing on the muddy trail near its shore. We loiter. And loiter. And eat. And loiter some more.

We talk to the grannies, who are concerned about water sources up the trail. The short one, who is literally dwarfed by the size of her pack, is the head honcho and medic of the whole group we passed. They are communicating via walkie-talkie. I mention that they could just dry camp, after getting water near the falls. Oh no, that won’t work, Judi has to have her oatmeal and her coffee in the morning, she says. There will be seven tents. They’ve come all the way from Lake Tahoe to hike in the Three Sisters Wilderness. I shudder to think about what would happen if one of the hikers ahead of them needs first aid. It’ll take her about an hour to catch up, at least. At last they lumber off, heavy leather boots squeaking under the weight of their heavy packs.

Once again I appreciate the simplicity of the thru-hike, just the two of us, our ultralight gear, playing it by ear every day and taking life as it comes. Not having to worry about the gastronomic requirements of fellow hikers and finding space for seven tents. 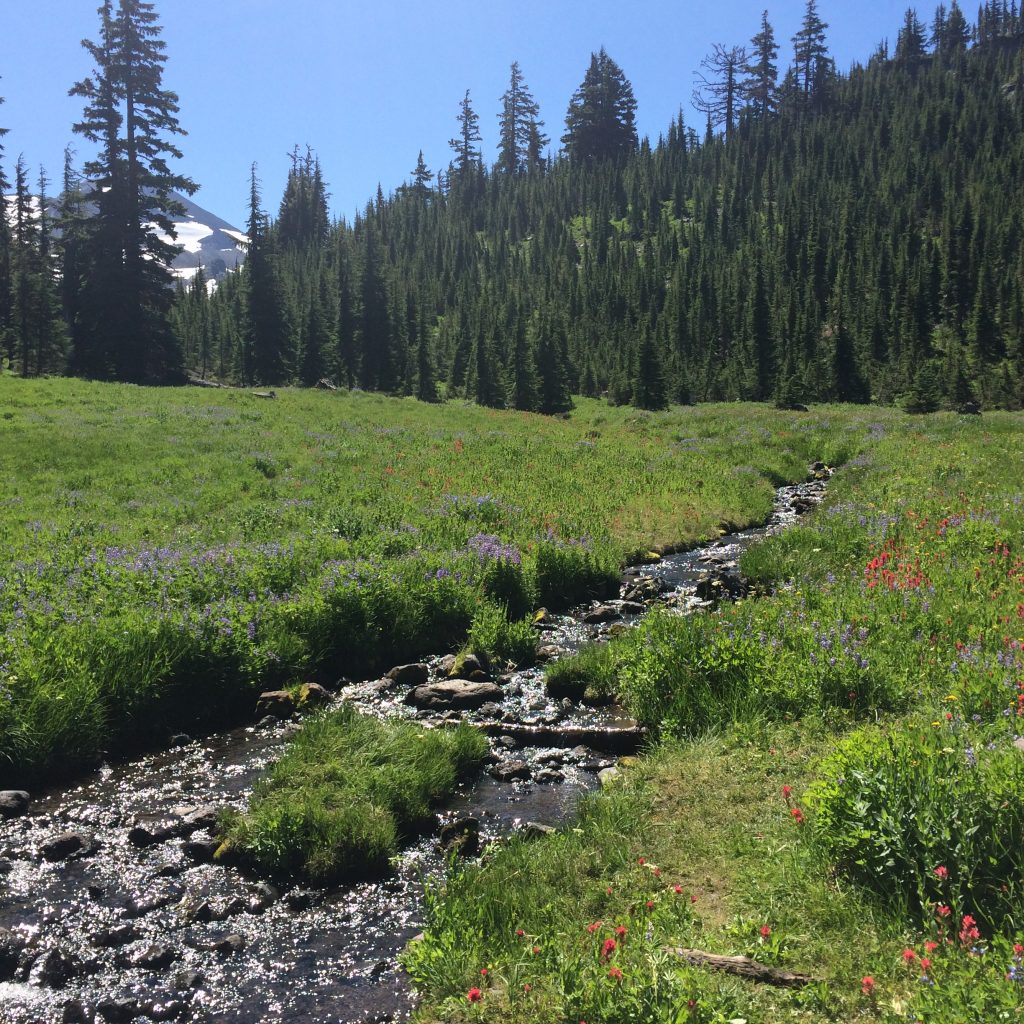 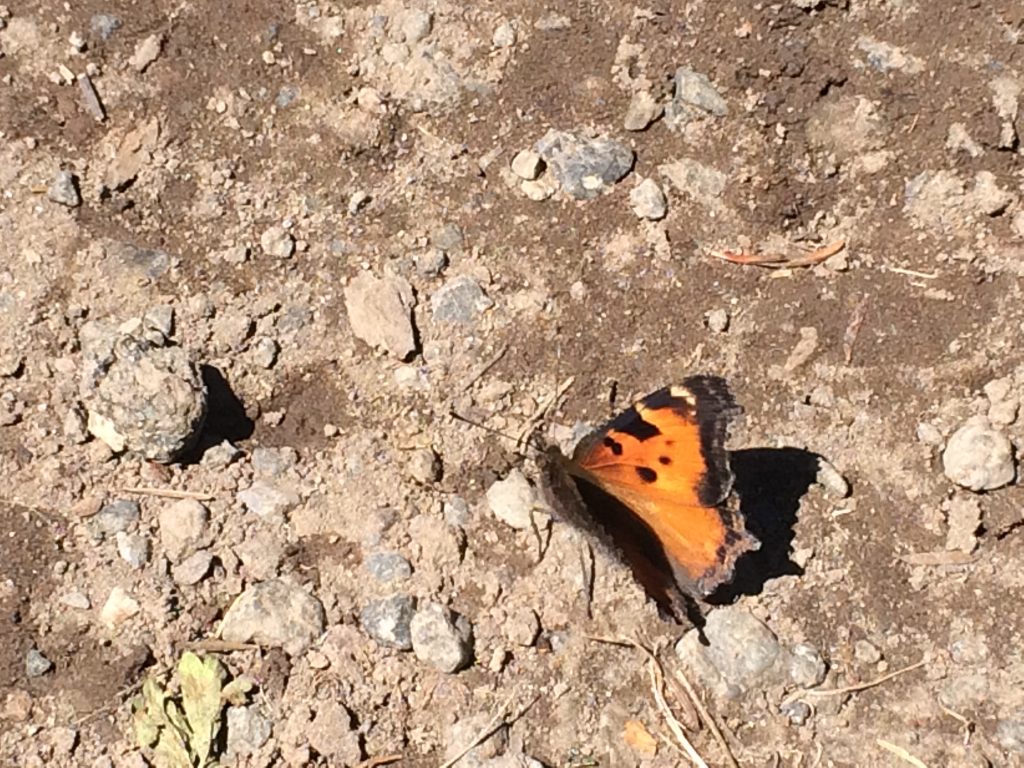 Finally we shoulder our own packs and carry on. We head into a moonscape of lava flow, hiking up to a pass (Opie Dilldock Pass) and then back down the other side.

Looking south to Marc climbing up the pass: 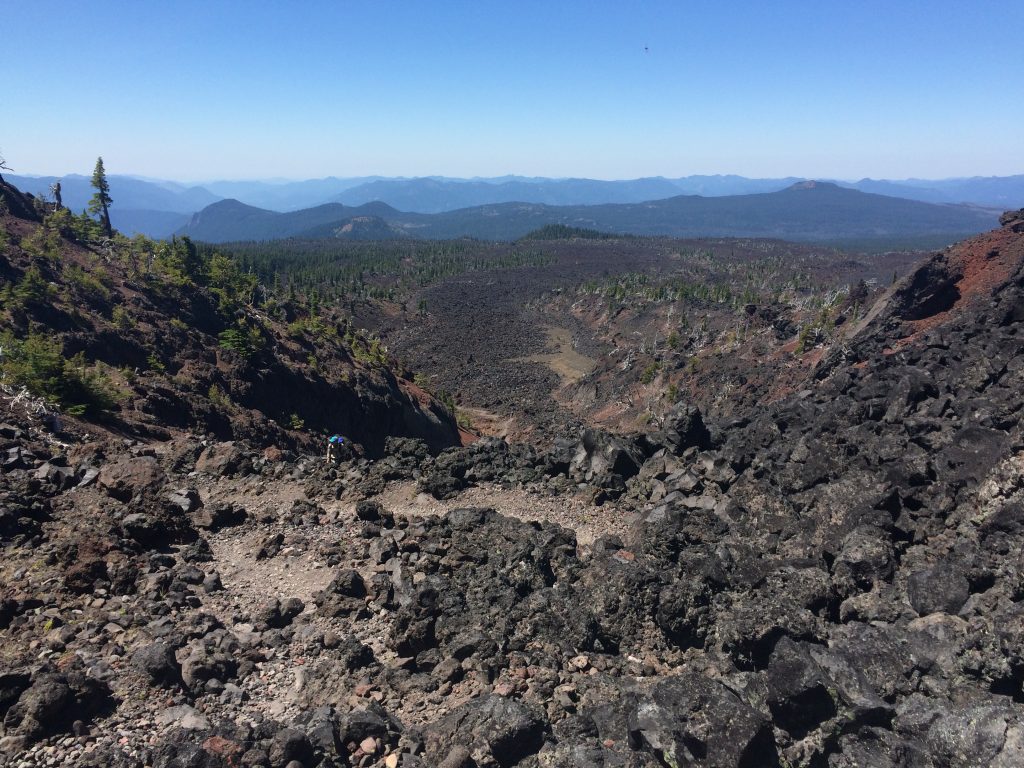 Then in the other direction: 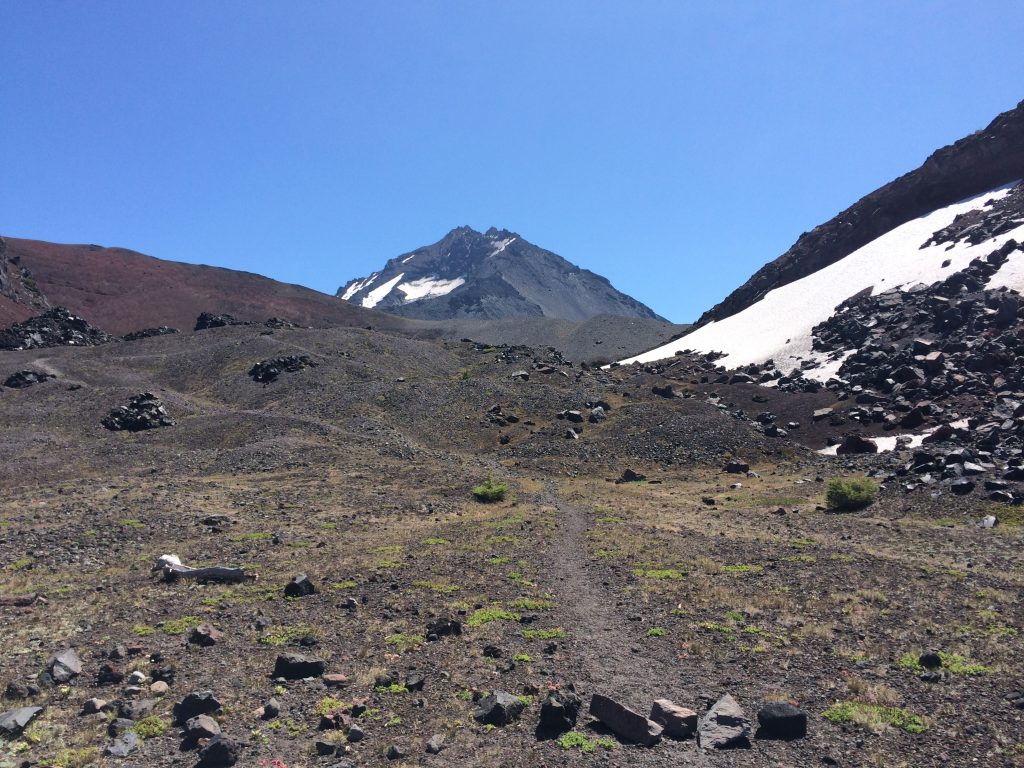 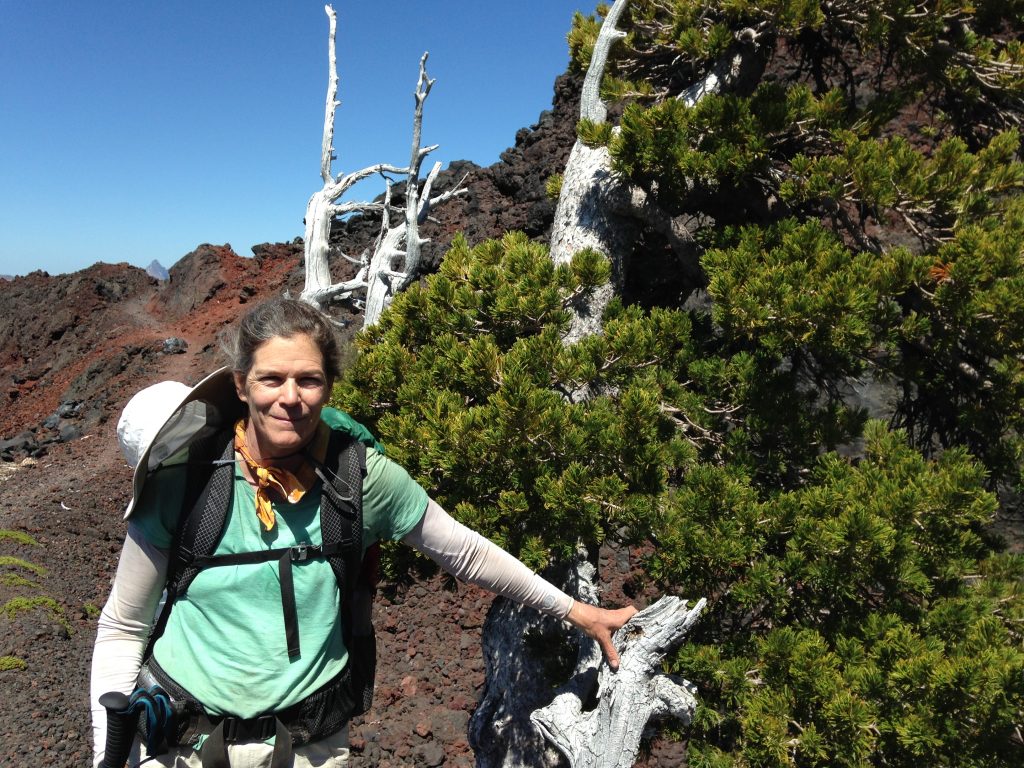 This is the first lava we’ve seen since before Fish Lake. Again I imagine the ferocity and blazing heat that blasted this stuff out of the earth and along the ground in vast flows like this. A few scraggly trees survive in this barren landscape – I think they’re bristlecone pines but I’m not sure. The skeletons of their dead rise up into the sky, stark white against the black background.

We pass Minnie Scott Spring without even realizing it. We don’t need any water. Soon we’re at South Matthieu Lake, a tiny tarn with three “designated” campsites. Now we have to decide: Head off the PCT down to North Matthieu Lake, where there are seven designated campsites, or on to Lava Camp, a campground right on the road, next to a lake.

Very much out of character, Marc opts for the nearer solution, and less than a mile later we’ve claimed campsite number five for ourselves. The site’s wooden post has an image of a tent and and arrow pointing uphill; we follow orders and pitch our tent up away from the lake. But there’s nothing preventing us from lounging around on the perfect flat spot right next to the lake, and we bring down the stove and our food and settle in for a late afternoon sprawl. This is the earliest we’ve stopped hiking yet!

The water is clear and blue, and I quickly strip down to my undies and jump in. Just off our site there’s a ledge in the shallow water that drops off into deeper water and I have fun launching myself off it a few times. We wash out our shirts and socks, hanging them on some nearby huckleberry bushes to dry.

Two women wearing skirts and leading a couple of goats on leashes walk by, heading up the trail to our tent site hopefully, come back down and then head on around the lake. Goats? Long skirts?

It’s a wonderful campsite, the lake is quiet and peaceful, I’m not exhausted, and tomorrow night we’ll be sleeping in a bed!