No, I’m not being prudent and stocking up in advance of the Big One that experts predict has a 33% chance of obliterating Vancouver in the next 50 years.

We’re heading for the hills.

In my last post — which, in case you missed it, revealed the origin of the word Gydle — I mentioned that the event of my passing 50 suns on this planet was an eventful thing for me on a number of levels. I don’t normally overdo the birthday thing. Dinner at a restaurant. A cake or flowers, if I’m lucky.

But this year it felt different. I decided that this one needed marking, that I needed to stop and take stock of where and who I am.  Not with a party, though. Or a beach vacation. But what?

I love to hike. I read Cheryl Strayed’s memoir, Wild. I watched the movie. I’ve read Shirley MacLaine’s story about her pilgrimage on the Camino. For a long time, I’ve wanted with every fiber of my being to do a journey like those. And this year, my work at the hospice opened my eyes to how temporary our sojourn on this planet is. If I want to take a hike, it better be now, while my body is still strong.

So, a hike. An epic one. But where to go? I considered the Camino. But you don’t want to do that in the summertime; too many people. The PCT is too long, at least right now. And I don’t want to do just part of anything. Plus it’s probably mobbed this year after the release of Wild.  The West Coast trail on Vancouver Island is too short, at two weeks; never mind all the bears and cougars.

And then I found it: the Colorado Trail. It goes through places my dad took us backpacking when we were kids. It’s a lot wilder than the PCT or the Appalachian Trail; not so wild that bears and cougars are  a big problem, and not as long or wild as the Continental Divide Trail. It starts at an altitude of 5,522′ just outside Denver, ambles up and down (EDIT: high point is 13,271′ ) for 500 miles to Durango.

50 years, 500 miles. We will stay in 5 towns along the route. It should take about 5 weeks. All those azure-blue fives! The sky at that altitude is a deep satisfying blue and at night, without light pollution, it seethes with stars and galaxies. A perfect atmosphere for a mid-life journey.

Last fall I bought trail guides and maps. I invited Marc along for the first week or two and my brother Rob said he’d join me for a bit on his bike.

One morning over coffee Marc asked me if he could come the whole way. I was stunned – this is a guy who has never, in all our 25 married years, taken more than 11 consecutive days off work. He even works most weekends. I never dreamed he’d renounce his office for five weeks. Of course you can come! I said. You can carry the tent!

We leave Friday for Seattle. We’ll finish assembling our four resupply boxes and ship them out on Saturday, then Sunday we ship ourselves out. In Denver we’ll hit REI for fuel canisters and meet a “trail angel” named Colorado Rob for dinner; he’ll take us to our hotel in Littleton, then to the trailhead at 6:00 Monday morning. If all goes well we’ll emerge in Durango 30-34 days later.

As the date approaches, I’m vacillating between excitement and fear. Mostly fear. I handle it by going online and searching for ultralight gear. 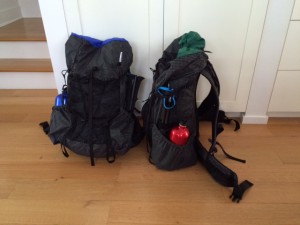 We have two new JepPaks, each weighing in at only 30 ounces, custom made by an amazing guy called Sam in California. He’s a fount of UL wisdom. Here they are, partly loaded.

I was going to make a stove using an empty cat-food can, but when Marc signed up on the trip he nixed that idea. He has an irrational fear of things blowing up in his face. Then you get to carry the stove, too, I said. 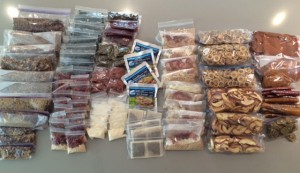 Even with all the gear, I’m still scared.

I’m usually pretty fit. But this year, I’m in the worst shape of my adult life, 15-20 pounds over my normal weight. Hormones! I tell myself. If I were on my own, I could take all the time I needed, but Marc can’t do that. What if I can’t hike 15 miles a day?

Maybe I’ll get hit by lightning in one of the Rockies’ notorious afternoon thunderstorms. In case you were wondering, the correct thing to do is get below treeline, off of ridges, and crouch down with your feet firmly together so your body doesn’t serve as a conduit for ground current. All that yoga will come in handy, I tell myself. It’s just chair pose! I can hold that forever, right?

I worry about hypothermia. It gets cold at night at 10,000′. I go back online. Which down parka is the lightest? Rain shell, check. Rain pants, check. Thermal underwear, check. Gloves, check.

There was a ton of snow in Colorado this year, and it’s only just melted. What if the trail is muddy or we have to ford a lot of creeks? My feet will get wet and I’ll get blisters! I go online and buy a pair of Crocs. Only six ounces.

Yesterday I filled my water bottles, loaded up my pack and went for a test drive. I worried over every twinge in my foot, every possible chafing of my pack’s shoulder straps.

I’m not going to blog from the trail. Apart from a few photos to FB, I’ll disconnect and just savor the experience, good or bad.  When I get back, I’ll think about it for a while and at some point I’ll distill the results here on Gydle. One thing I would love to learn from this trip is how to stop being such a worrywart and control freak. How to let things go and live in the moment.

Friday, before we leave, I’ll do my shift at the hospice. This is the hardest thing, knowing that most, if not all, of those lovely people will not be here when I return. I know that’s what a hospice is all about, but it’s still hard. But every thing and every one I take for granted could be taken away at any moment. We are all just temporary wanderers on this planet. I will say goodbye with this in mind, and keep them in my heart.

See you in six weeks!