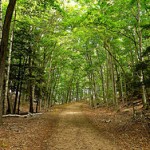 Here I am again. I just got back from a run and I had to post something. It was transcendent. It’s probably just my endocannibinoids talking, but I feel like I’m entering a whole new plane of existence. Yeah, that does sound cannibis-like. Duuude.

This morning I was snooping around on iTunes looking for some new running tunes. None of the music that other runners were raving about on various blogs and magazine sites did anything for me; the songs were all too strident and fierce. Then I happened upon an album of new age-y, celtic inspired music by David and Diane Arkenstone, and when I checked it out with my BPM counter, all the tracks were right in the 90-95 bpm zone. Perfect for running! On impulse I splurged and bought the whole album for 12 francs. I downloaded it to my iPod and headed out the door.

I intended to run my usual 7-mile loop up the Venoge and back through Preverenges. But this music was something else. As I ran through the forest, I felt like I was starring in my very own Braveheart movie. I felt like that gorgeous elf lady in the Lord of the Rings. It was effortless. I felt powerful and strong and fleet of foot – anything was possible.

So I didn’t turn around at the turnaround point, but kept on running, floating through the forest, feeling like I was lost in another world, on some urgent quest. It’s a weekday, so I mostly had the forest to myself, and I wrapped it like a blanket around me, ignoring the industrial area just beyond the trees. I ended up going 14.5 miles, the album in its third or fourth iteration by the time I pulled my weary carcass up to the door.

What is it about music that can propel us like that? Why would some kitchy new age music make me feel like Braveheart or Arwen, strong and light and free, running through a faraway forest in a faraway time? All I can say is whatever, dude. Keep it coming, brain.