New Mexico is in the midst of a major winter storm, with snowpacked, icy roads all over the place, gusty winds, the whole shebang. And my family is up in it in a flimsy tube of steel.

So this is what anxiety feels like, I think to myself as I feel my innards compress. Thank god for the internet. I track the plane’s progress in real time and peruse its position log (in three different time zones) on FlightStats. It has passed over Wichita, and is heading for the Texas-New Mexico border. Every minute or two I refresh the screen and watch the plane draw ever closer to the menacing green-blue radar map poised over Albuquerque. At least it’s not purple, I think, grateful that the storm intensity hasn’t passed into the red-toned bruise zone.

I am quite relieved when, at 10:31 pm, the status report reads “landed” and not “crashed.”

But they still have to get their baggage and get on the 10:45 shuttle bound for Santa Fe. Obviously that’s not going to happen. I had called the shuttle office earlier in the day and warned them that three of their passengers might be a tad late. The shuttle leaves at 10:45 sharp, no exceptions, I was told.  He also informed me that the last shuttle of the night, at 11:45, was full.

In an ordinary family, this would be no biggie. You’d pull out your cell phone, call each other, figure out what to do. But I have a husband who doesn’t believe in cell phones.  His iPhone is in his office back in Switzerland. I asked Brendan to bring his phone, but I have no idea if he did, if he charged the battery before leaving, or if his prepay phone even works outside Switzerland.

I’m hoping Marc will overcome his Y chromosome and ask a stranger if he can borrow a cell phone. I wonder if he remembers my mom’s phone number. I sent it to him in an e-mail, and wifi in the Albuquerque airport is free. But earlier this afternoon he said his computer was almost out of power. And I have all our US adapters with me.

We’ve been reduced to pre-2000 communications. No cell phone. No computer. How did we ever manage back then? Everything is so uncertain.

I guess this is a reality check for how dependent we’ve gotten on technology. Not having total connectivity has become highly stressful. What does that say about us? I wonder. I make a foray into my mom’s pantry looking for refined carbohydrates. What else can I do to allay this intolerable anxiety? I can write!

Midnight chimes on the clock in the family room where I sit typing away. Not a peep. Are they, by some miracle of timing, in the shuttle, fishtailing their way up the icy interstate to Santa Fe? How will I know whether or not to go pick them up? There’s four inches of fresh, unplowed snow on the ground.

12:15. The phone rings! It’s a pay phone in the airport. Marc has made contact! Relief washes through my body.  They’re waiting for the shuttle. Two of their bags went to Chicago instead of Albuquerque. They don’t need this after 24 hours of travel. I explain that the 11:45 shuttle is booked, that they should just go get a hotel and sleep.

Marc’s tired and fed up, with two desperately exhausted teenagers in tow. I wouldn’t want to be him right now. A few minutes later, the phone rings again. Marc has borrowed a cell phone (yes!) and they’ve successfully negotiated spots on the last shuttle up to Santa Fe. The company has added a second vehicle to accomodate the situation. It’s 12:30. I tell him to call when they’re just outside Santa Fe and I’ll meet them at the drop-off point. This in itself is a scary proposition, as the flakes are falling thick and fast outside in the dark.

I’m exhausted. Brendan, who can never sleep sitting up on airplanes, must be close to total cognitive collapse.

A few minutes later, just as I’m about to climb into bed to get an hour of sleep before going to pick them up, the phone rings again. It’s Marc. The driver is really nice, he says. He’s going to drive us all the way to your mom’s. This is amazing – the airport shuttle never does this. You always have to go pick people up at the drop-off point. Another wave of relief washes over me. I won’t have to take my mom’s car out in this! Yes!

Two hours later, I hear something down in the kitchen. It’s Marc. The driver had delivered them right to the doorstep, in four inches of fresh snow. The boys are down in the frigid guest house (boiler issue – resolved, but it takes 24-28 hours to heat the house up) already almost asleep under a huge eiderdown.

I lie in bed, cozy and warm. It feels so wonderful to have my whole little family together, safe and sound with snow falling outside and nowhere to go. And we are, thanks to the kindness of strangers. That’s what Christmas is all about, isn’t it?

This is what we woke up to the next morning: 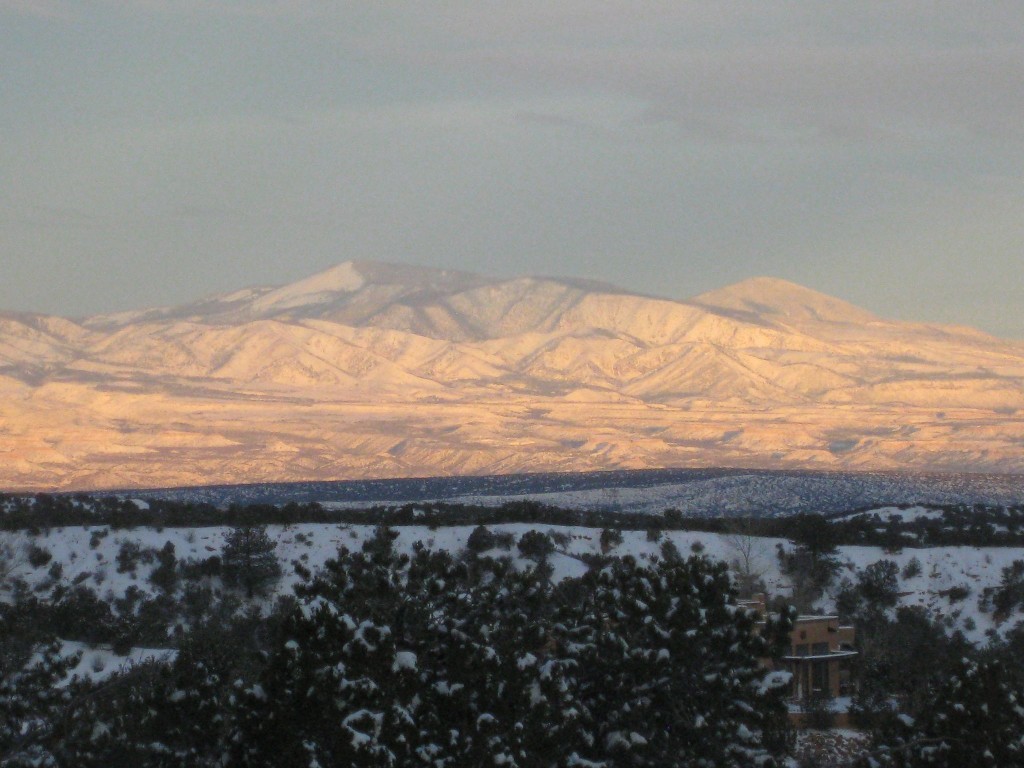 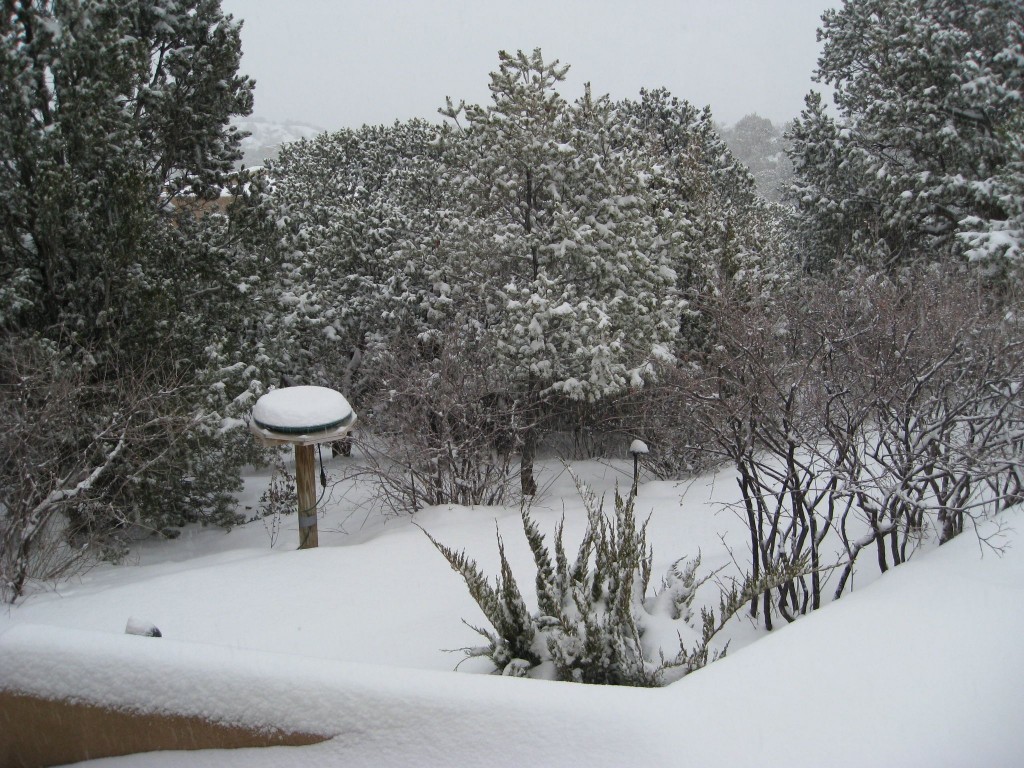 With a visit from a hungry Flicker at my mom’s feeder: 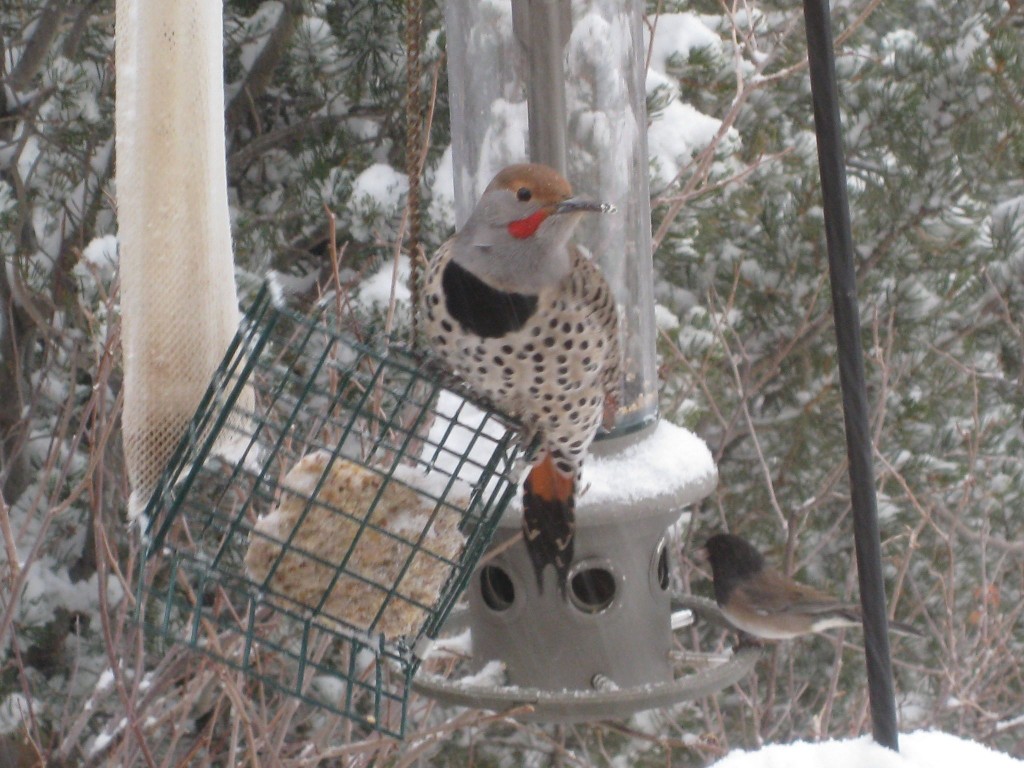