In the vast open country of New Mexico you can watch the rain coming from miles and miles away. The clouds roil up from the Southwest, a mass of slate gray stretching out over the sky. A really dark cloud brings hail and driving rain, which will make the arroyos run. Lightning flashes in the distant dark mass; I count the seconds until the thunder booms.

Then it happens. The wind picks up, and the smell of coming rain envelops me. I go outside and drink it in viscerally. It doesn’t exist like this anywhere else on Earth. What does it smell like? Rain. Rain in New Mexico.

I cannot find words to describe it. It’s just part of me, infused with my memories of childhood.

I can almost hear the lifeguards blowing their whistles, “everybody out!” I remember running for cover as huge, angry raindrops pelt our backs and slam into the earth, raising little puffs of dust as they hit. Lightning flashing, thunder right after, deafeningly close. We’re scared, excited, exhilarated.

It’s all over in about fifteen minutes, off the mesa, on over the parched badlands towards Santa Fe and Taos. In its wake everything is fresh and cool. The smell lingers long into the evening.

I imagined the earth opening up its pores and breathing. 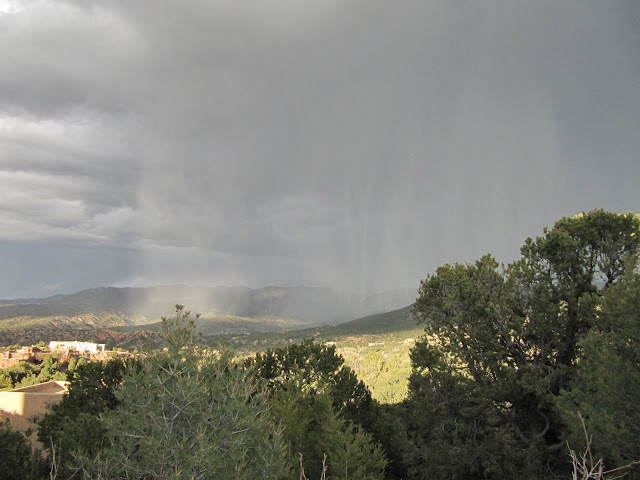 It wasn’t until this summer that I learned there is a word for this smell: Petrichor.

What a great word! It was coined in the 1950s by Australian scientist Richard Grenfell Thomas, from the Greek Petros, or stone, and ichor, the ethereal fluid that flows in the veins of the Gods.

Thomas, together with “Miss Joy Bear” (no kidding), studied the phenomenon and wrote a paper about it in the journal Nature a year before I was born. They hypothesized that the oils from desert plants adsorb onto rocks, and the humid air before a rainfall causes water to pool in the pores of the rocks, releasing the oils into the air.

Thomas proved his theory by “steam distilling” rocks in the laboratory to extract the smell in liquid form. He also discovered a small Indian perfumery that had been doing this for years, selling the perfume as matti ka attar, “earth perfume.”

In their 1964 paper they also implicated geosmin, a protein synthesized by certain kinds of bacteria. If it hasn’t rained in a long time, this compound builds up in the soil and then when it rains it’s released, with a distinctive earthy smell.

Humans are extremely sensitive to geosmin, and can detect it at 0.7 parts per billion. For the most part, we like it — it’s used in perfumes to convey a musty, earthy odor. In drinking water, though, it’s gross. If you’re interested in the biochemical details, you can read more in the Protein Spotlight, where it was protein of the month for June 2003.

New Mexico rain, however, is something special. I personally don’t think geosmin is involved. It doesn’t smell earthy. It smells, um… No. I can’t find the words.

Thomas and Bear’s volatilized-oils-after-a-long-dry-spell theory, explained in more detail in a 1976 issue of Ecos Magazine, makes sense to me. New Mexico’s chamisa, juniper, ponderosa pine and pinyon pine are all very smelly plants. Its  volcanic tufa rocks are full of holes that would be perfect oil adsorption surfaces. The air is really, really dry most of the time. The smell could very well be a magnificent combination of all these plant oils.

Another smell that instantly transports me back to childhood is the smell of diesel and concrete – eau de European parking garage – something I had never smelled until my family spent a six month sabbatical in Switzerland when I was seven. Now, every time I enter a parking garage in Switzerland – which is pretty often – I’m transported to 1972 Geneva and the feeling of being a foreign child in a foreign land.

One of my favorite science writers, Jonah Lehrer, discussed the strength of smell-induced memory in his blog the Frontal Cortex, in 2009.

A new paper by scientists at the Weizmann Institute documents the primal connection between whiffs of smell and episodic memory. This nasal nostalgia is mediated by the hippocampus, the manufacturer of long-term memory in the brain. Here’s the abstract:

“Authors, poets, and scientists have been fascinated by the strength of childhood olfactory memories. Indeed, in long-term memory, the first odor-to-object association was stronger than subsequent associations of the same odor with other objects. Here we tested the hypothesis that first odor associations enjoy a privileged brain representation. […]”

Why is smell so sentimental? One possibility, which is supported by this recent experiment, is that the olfactory cortex has a direct neural link to the hippocampus. In contrast, all of our other senses (sight, touch and hearing) are first processed somewhere else – they go to the thalamus – and only then make their way to our memory center.

Things you taste and smell as a child – coming rain, European parking garages, madeleines (if you’re Proust) make an indelible mark on your memory, because that primal experience has the eternal right-of-way on your hippocampal highway. Maybe that’s why, when I’m home in New Mexico, I head out at the first sign of rain to watch the sky darken and drink in the smell of the Gods.

As we head into downtown Santa Fe for dinner, my mom asks me what I’ve been writing about all afternoon. “The smell of rain here, and how it brings back so many memories,” I tell her.

“Remember when we were living in Bethesda and we went outside in the rain?” she asks. “It didn’t smell like anything. We were so disappointed.” I didn’t remember that. It’s just as well.

2 thoughts on “The smell of rain”