We wake up bright and early and head back over to the PCT from our awesome campsite at North Matthieu Lake. Soon we’re walking on lava, winding in and out of ancient flows, making our way to the road and MacKenzie Pass. We’ve gotten an early start because the forecast is for a hot day. Yesterday we saw a very sunburned southbounder, who said hiking over the lava flow in the heat had been unbearable. From MacKenzie Pass I figure we have about 5 miles of lava walking to do, and early morning is the best time to do it.

We can see both Mount Washington and Mount Jefferson in the distance to the north, and the Sisters to the South. We make our careful way across the eerie, desolate landscape, trying to not twist our ankles on the rocky trail. 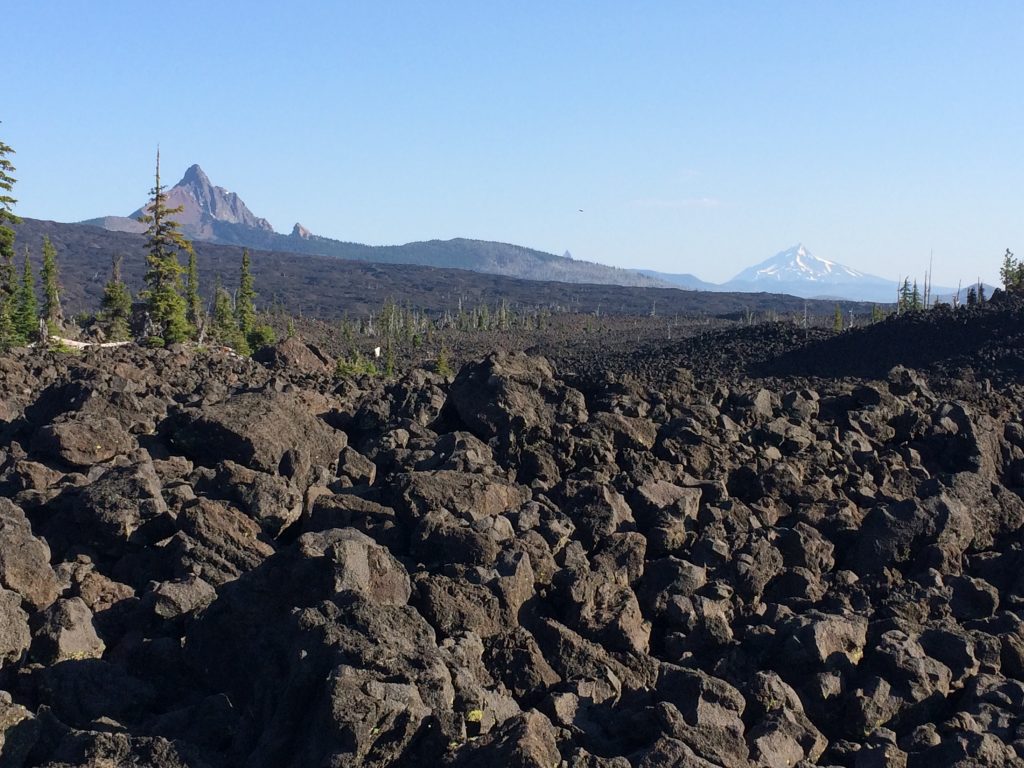 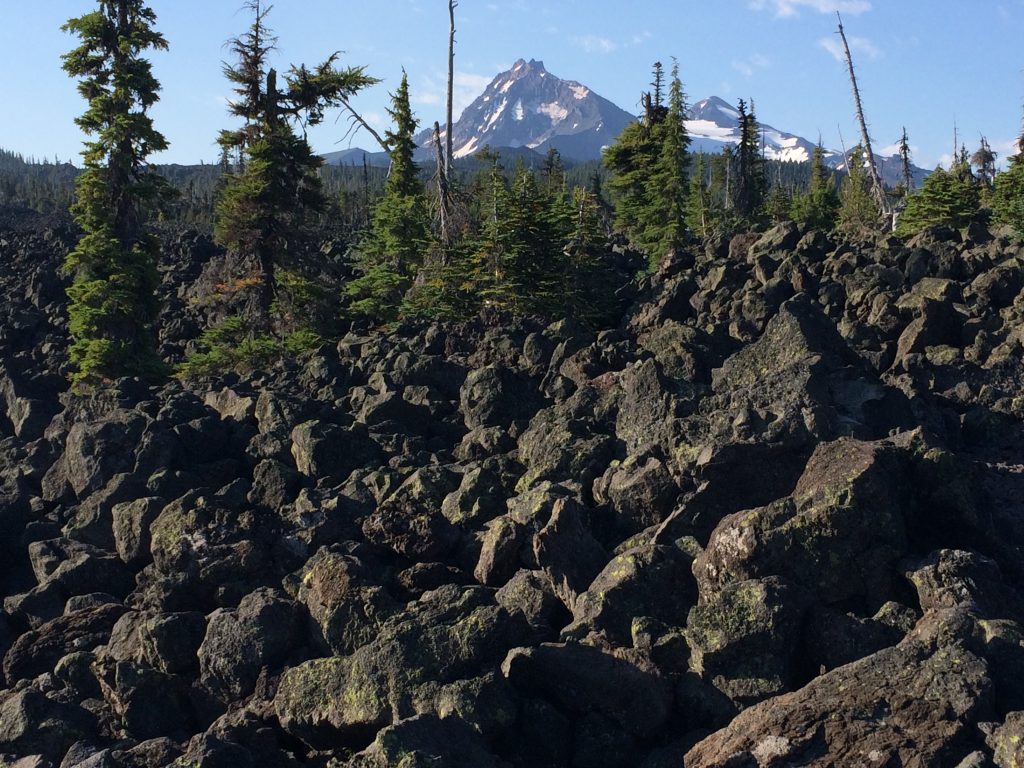 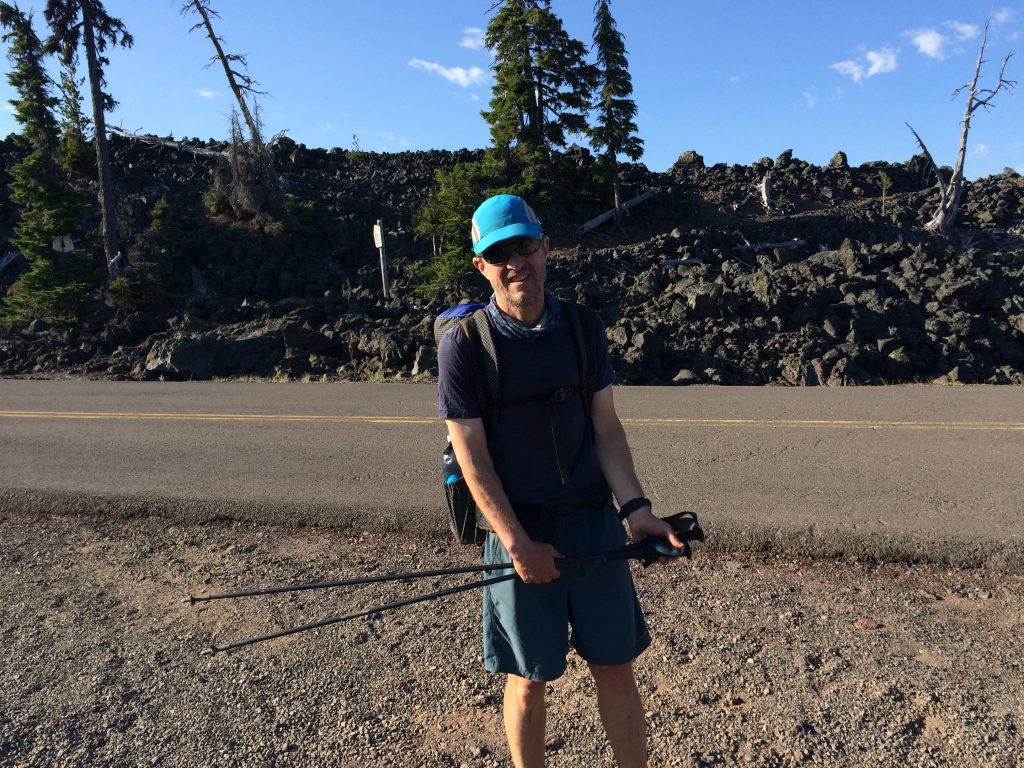 Finally we leave the lava flow behind, and tackle the next challenge—a huge burn. Luckily it’s not too hot yet. My brain is pulling ahead of me, thinking about meeting up with Jim and Judi, getting to the Santiam Pass trailhead on time, and I have to keep reminding myself to stay here, in this moment, on this hillside amidst the skeletal white bones of the trees and the flowers and ferns. 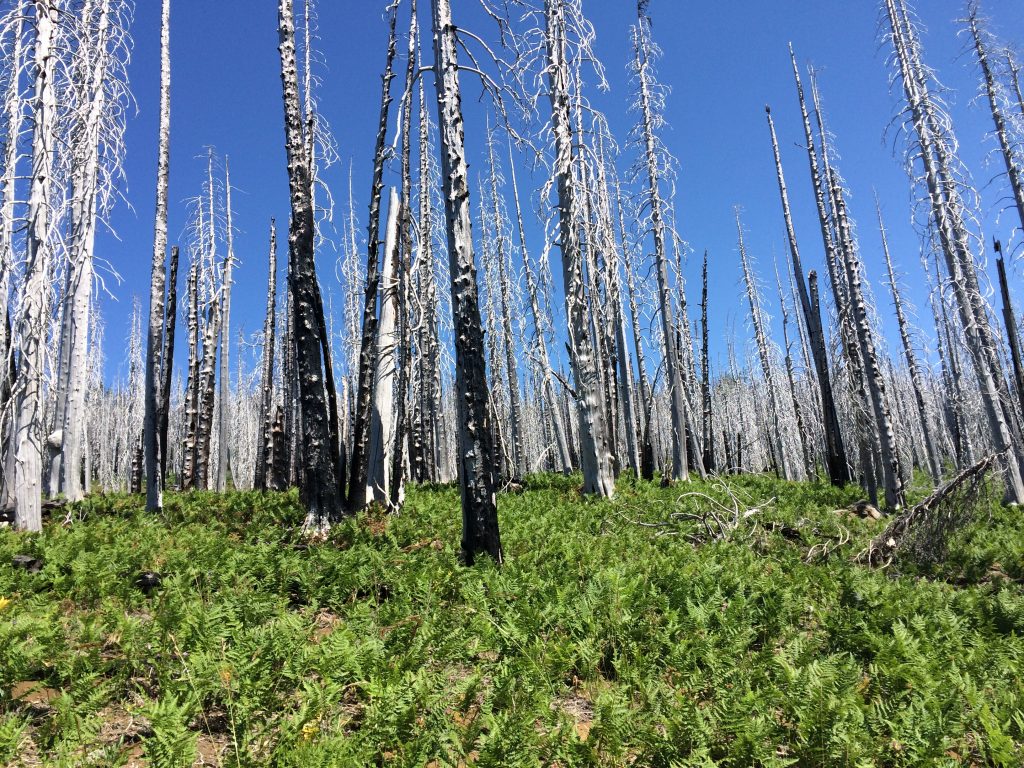 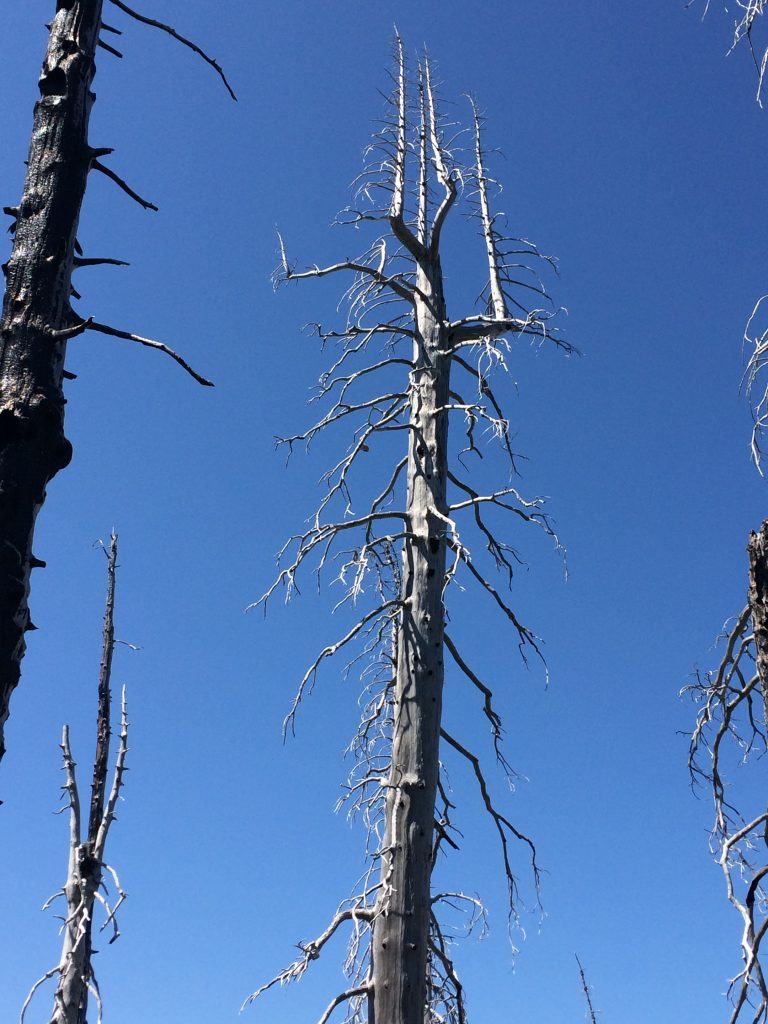 Meanwhile Marc is powering along ahead of me. We pass a couple who are doing a section hike, heavily loaded down, quite cheerful and chatty, and a tru-thru hiker passes us. I feel good, hiking along. Not too many blowdowns. We have enough water to get us to the pass, as there’s not any along this stretch, unless you take the side trip into Big Lake Youth Camp, which we’d rather not.

Soon we’re out of the burn, we’ve circled around the southern flank of Mount Washington and back into a lovely forest with wildflowers. The thru-hiker waves at us from a campsite next to the trail so we wander over and join him for a break. Lovely, cheerful guy, he tells us he also had his feet massaged by Mama Goose and that’s why he switched to Hokas and his feet have been happy ever since. I’ve still got my right heel duct-taped and my feet have been less happy on this hike than on last year’s, so I take note. He’s heading for the youth camp.

Soon after, we pass the couple again, and they’re worried about running out of water. It’s only about 3 miles to the Youth Camp, so we advise them not to bother bushwhacking to a sketchy pond. They won’t die of thirst in only 3 miles. Marc shakes his head afterwards, though. Why don’t people bring enough water, like he does? Aquaman, I think.

As the day wears on, it gets hotter and hotter. Near the turnoff for the youth camp, which is just a handwritten addendum on another sign pointing to something else, we enter another extensive burned out area. It’s blazing.

I decide that this is a perfect opportunity to put my umbrella to use — after all, I have carried it all this way — so I pull it out without even taking my pack off and put it up. I think the shade cools me down a bit. The miles add up. Trudge trudge trudge. We cross lots of cross-country ski trails and some dirt roads that have been blocked off by dead trees to keep motorbikes off. I notice wild strawberries on the side of the trail and start to fall behind as I replenish my vitamin C stores.

At mile 1996.5, two miles before the pass, there’s a pond on the map, and finally a cell signal,  and so we stop here to take a break and give Jim and Judi a call. It’s about 3:00. Jim picks up the phone: You’re there already?

I reassure him that we’re not, that we’ll be at the pass in about an hour. He tells us that they were just getting ready to leave —even though I’d previously told them we’d likely be at the pass around 4:30. Great minds!! I take a few minutes to bathe my feet in the water of the pond and we hike the last two miles to the pass. They seem endless!

We have to cross Highway 20, kind of nerve-wracking since it’s a very busy highway, and just as we crest the hill who should I see ambling down the path but my uncle Jim!!

Over here! I yell.

Here we are at the trailhead: 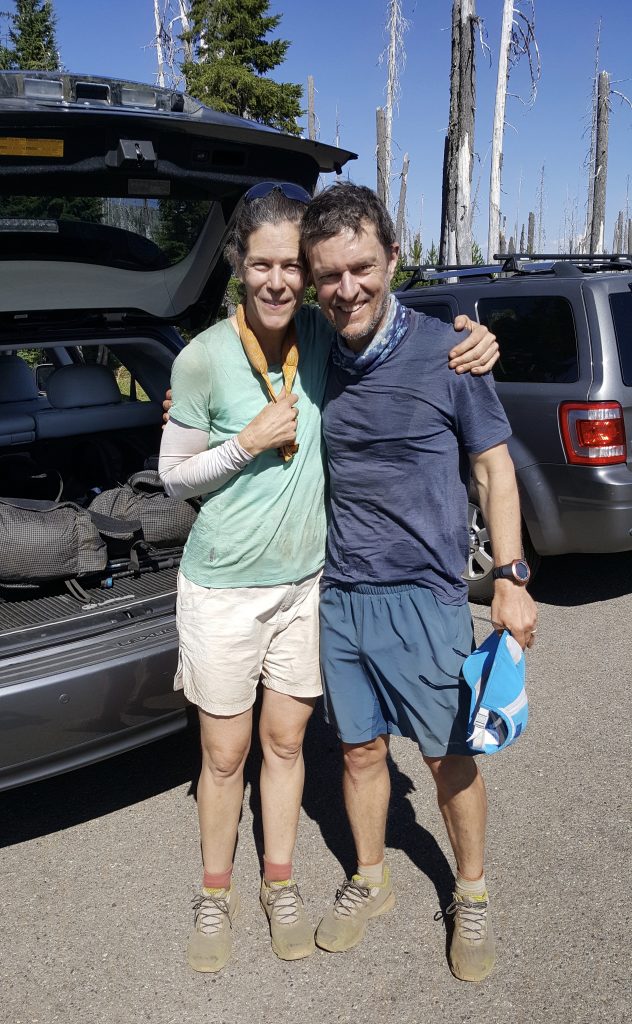 We put our gear in the back and our stinky bodies in their car and head down the pass and to their ranch outside Sisters. I’ve never been here, not in all the years I’ve been Jim and Judi’s niece, and I’m floored by how beautiful this place is. Green pastures with lazily grazing cattle, huge big ponderosas, a creek running through it all, horse paddocks, a view of all the Sisters … 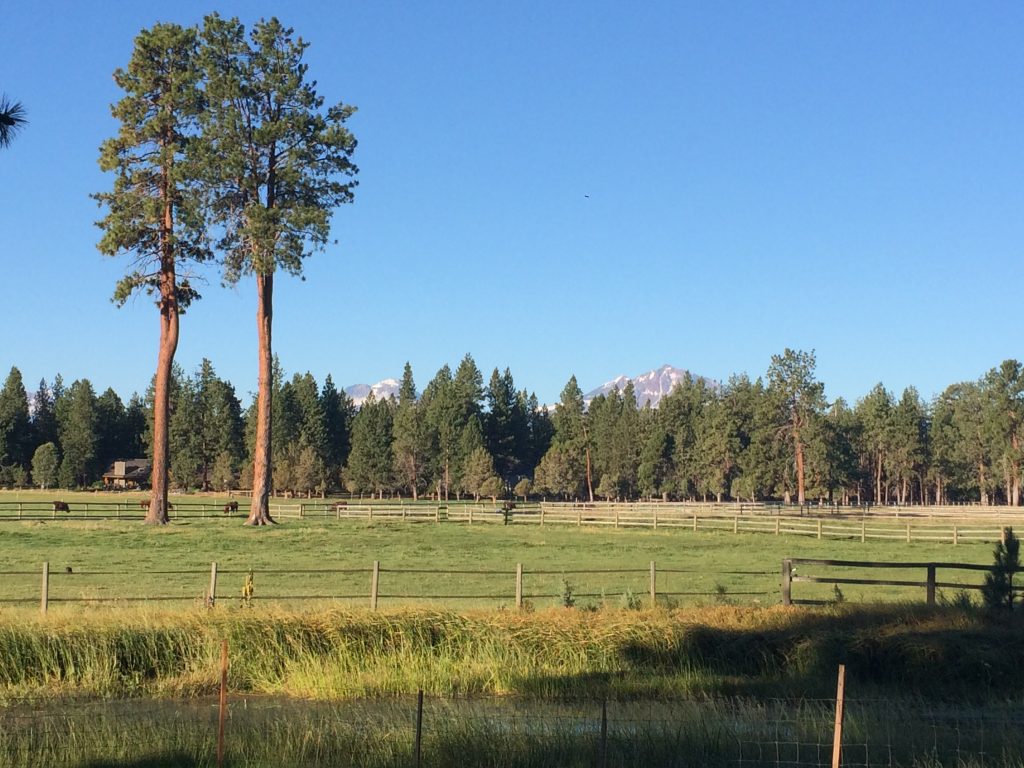 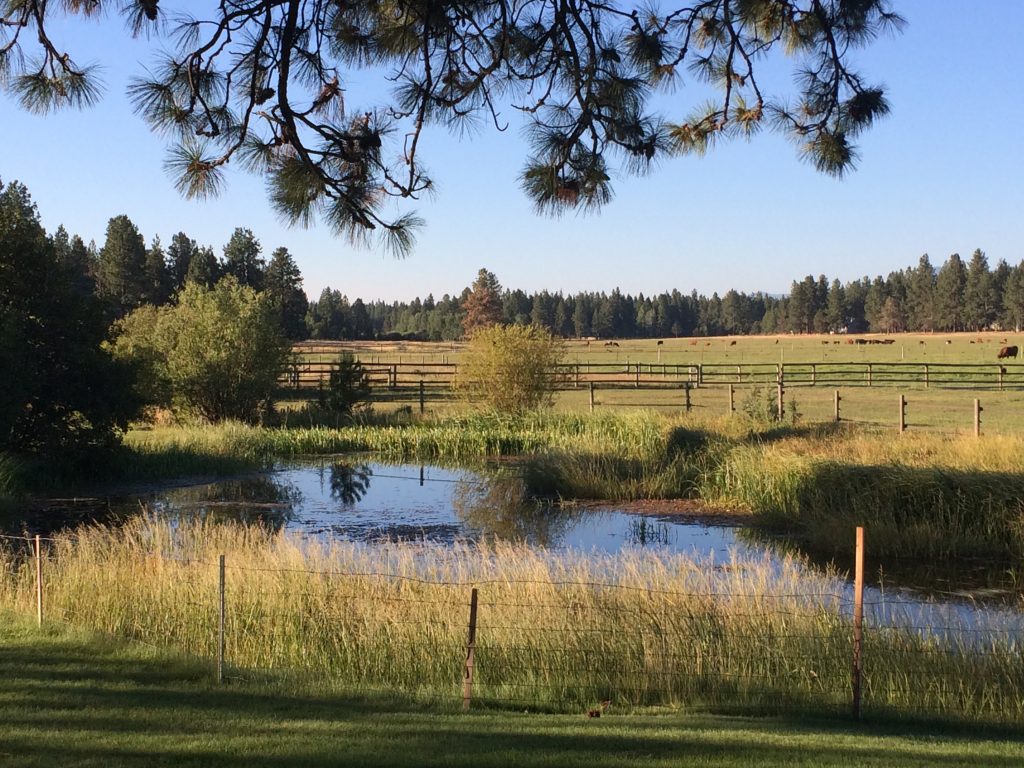 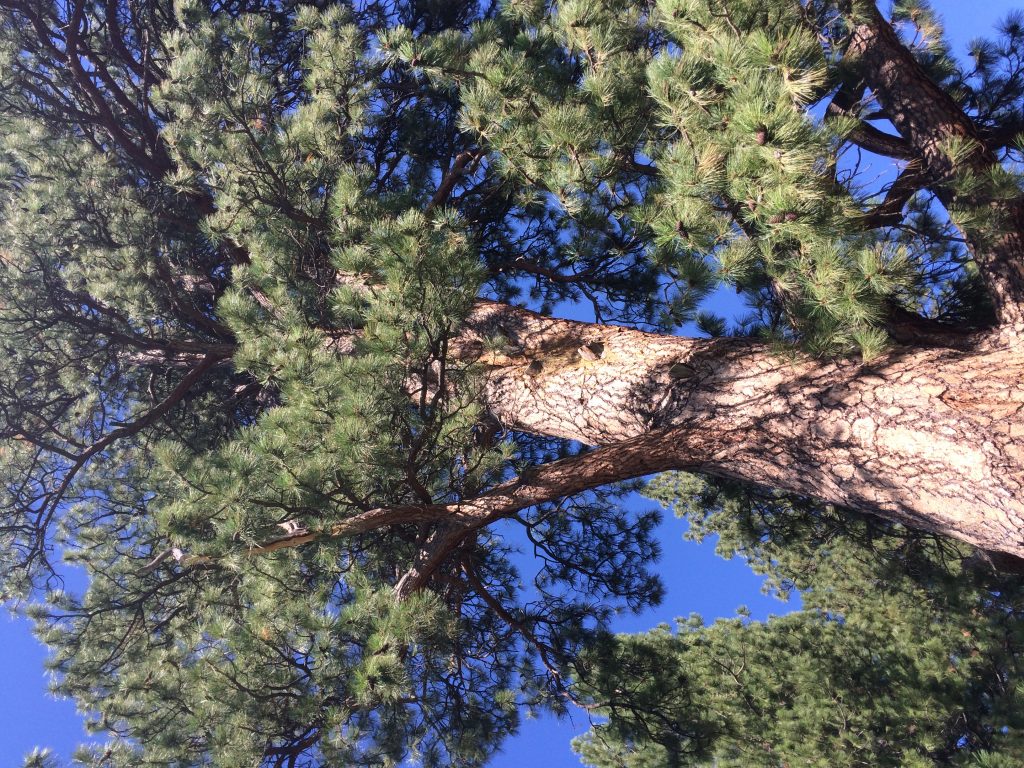 The last time I was in this area I was just a little girl, staying with my grandparents in their cabin near Camp Sherman on the Metolius River, playing waitress with my grandma while my older sibs and parents went off backpacking somewhere nearby and my grandpa waged war on the groundhogs occupying the cabin’s back lawn.

We are shown into our very own guest house, where Judi has stocked the fridge with untold wonders like strawberries, apples, bread and beer, and where the showers run hot and the towels are deep and soft. We borrow t-shirts from Jim and start up the washing machine. Marc wanders off to make friends with Alan the caretaker and I sink gratefully into the couch, clean and cared for. When my shorts dry out, we head for dinner in a local diner. Marc and Jim hit it off immediately, each ordering the vegan special that involves copious quantities of beans, heedless of the inevitable gastric consequences. Judi and I opt for more rational food. Beer never tasted so good!