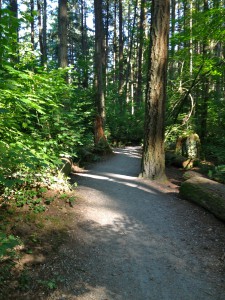 Yesterday as I was powering down Sasamat to meet a friend for a walk in the forest, I overtook a man and a small dog. The dog was setting the pace, waddling along and stopping frequently. As I passed them, I joked, “You guys are moving along at mach speed today!”

The man smiled. “It’s senior speed,” he replied. His love for this little fireplug of a dog was palpable in the air as I passed.

Later, in the park, my friend and I were surprised by a huge guy wearing earbuds who flung himself off a wooden walkway at top speed, nearly mowing us down. He pounded into the distance, leaving us gasping in his wake.

I’ve been running for more than 25 years.  Marc and I met in a running group. I still self-identify as “a runner.” I remember with a certain fond nostalgia the glory days when I was fast and fleet and stood on podiums. Occasionally over the past few years I have felt the urge to try and regain that feeling, and once again to test myself against others. But every time I foray into that competitive world of watch-wielding runners who calculate their pace per mile and adhere to strict running plans, it makes me slightly crazy. And not in a good way.

When I’m in “training mode,” I’ll often put music in my ears to help me move faster. I don’t hear the birds. I run in a bubble. I’m thinking away from the moment. How fast am I going? If I run 10k today that makes how many total kilometers this week? Should I do 400s on the track on Wednesday? There’s no way I’d stop mid-run to dip my toes in the Pacific or squidge them in the sand. I start to think about buying a watch with a GPS so I can track everything.

If I’m with a group I’m constantly comparing myself to the other women there. Reaching back to the young runner I was twenty-five years and twenty pounds ago, and trying to be that person again. Measuring myself – am I as good? As thin? As fast?

I did it again a couple of weeks ago. I was thinking about running a half marathon on my birthday. Pretty soon the earbuds were in again, and I was forcing myself out the door instead of just going because I felt like it. I joined a couple of group runs. The pressure to get faster, to measure myself against other people’s “accomplishments” started to build. I started to feel down on myself, disappointed that I wasn’t as fast or as skinny or as great a runner as I used to be. I started to feel old and slow.

I was losing the joy of it all. Movement for movement’s sake. The smell of the forest, the sounds of the birds, the freedom of an unfettered mind alive in nothing more than the present moment.

Maybe I’m evolving, or maybe I really am getting old, but that walk in the forest yesterday crystallized something for me. What’s the hurry? Why make a deeply satisfying activity into something that makes me feel crappy about myself? Why mask the glory of the forest by a 90 beats-per-minute drill going straight into my ears? Why spend my Saturday morning with people who are so focused on the numbers on their watches that they don’t even introduce themselves or strike up a conversation with me when I join them for a run (true story)?

Everyone has their own path to follow in this life. To those who find nourishment in competition, who need that extra edge to get themselves out the door and into a healthy body – more power to you. Go for it. I’ve been there, but that’s not where I need to be now.  Instead, I’ll just enjoy the splendor of the forest without a goal in mind or a watch on my wrist. I’ll move just because I can and because it feels good, not because I think I should or because I have a training plan or because I’m trying to become someone other than who I am right now.

I think when my b-day rolls around I’ll give myself the gift of a long, slow, soul-nourishing lope in the forest, a refreshing wade in the Pacific, and then use the $90 I would have paid for the 1/2 marathon entry fee to take Marc and Luc out for dinner.