An article in the local paper caught my eye today:

Well, I haven’t either! Have you? I quickly read on. Turns out they’re talking about a plant native to the Sumatran rainforest with the intriguing scientific name Amorphophallus titanium — from the ancient Greek amorphos, “without form, misshapen” + phallos, “phallus”, and titan, “giant.” In other words, huge misshapen penis. (Not titanium misshapen penis, which I admit is also quite intriguing.) It produces the largest unbranched inflorescence in the world. An inflorescence is a cluster of flowers on a stem — a flowering unit. (Which reminds me of my teenage years, when we referred to our progenitors as “parental units”).

Disappointingly, its common name is Titan Arum, coined by Sir David Attenborough who felt that referring to the plant as Amorphophallus titanium on his TV show “the Private life of Plants” would be inappropriate. Now there’s a missed opportunity.

This flower’s pièce de résistance is its greenish, erect spadix, which can grow to a titanesque height of over three meters (10 ft). All I can say is “Wow!” The spadix is wrapped by a spathe resembling a huge, purplish grooved petal, up to 1.5 meters (5 feet) in diameter.

One of these is about to bloom in the Basel Botanical Gardens. The last time this happened in Switzerland was 75 years ago, which is why an estimated crowd of 20,000 visitors will be making a mad dash to see this one. Time is of the essence because the plant can only keep it up, so to speak, for 72 hours, at which point it wilts and collapses. Since the first flower spiked at Kew Gardens in London in 1889, only about 150 blooms have ever been recorded outside the plants’ native rainforest environment. Here’s the Basel plant via the University of Basel webcam: 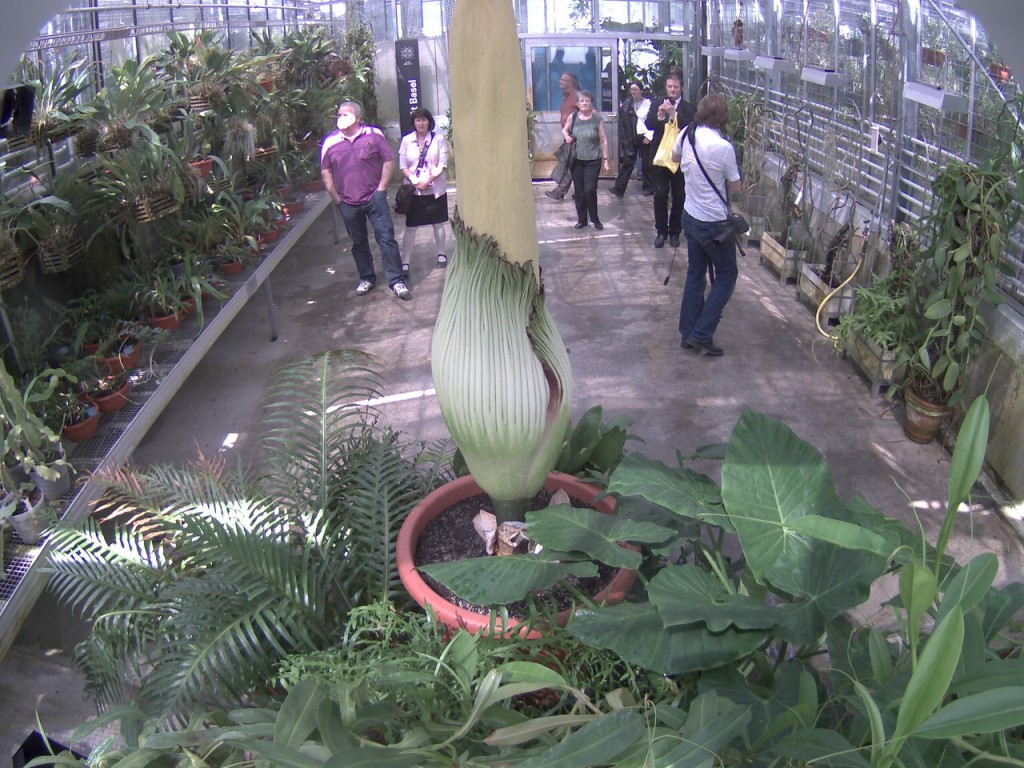 On the website you can see the picture in “mittel”, “gross” and “sehr (very) gross” — this one is just gross.

Why so rare? Well, sustaining this evocative verticality takes an enormous amount of energy. Every year, the plant puts out a single, enormous leaf, up to 20 feet tall and 16 feet across, that stores up energy in the plant’s underground bulb. A recently repotted specimen at Kew weighed a record 91 kg (200 lbs)! Every year the leaf dies and a new one takes its place. This goes on for a decade or two until the bulb has stored enough energy to flower. Then the plant goes into a four-month dormant period, gathering its forces for the Big Bang. It took the Basel behemoth 17 years to get up the gumption.

Amorphophallus titanium depends on flies and beetles to transport its pollen to neighboring relatives. Now what do flies and beetles like? Rotten meat! The plant has got this figured out but good. The minute it bursts into bloom, the heady scent of putrid, rotting cadaver permeates the air. A good bit of its stored-up energy goes into raising the temperature of the tip of its spadix by ten degrees, to human body temperature – this hot head helps the “perfume” volatilize, and also, along with the purplish petal, creates the illusion of a freshly killed carcass, all the better to lure in the unsuspecting insects. Lovely stuff. Visitors to the botanical gardens are warned to plug their noses. The staff is standing by on vomit patrol. I think I’ll just keep track of it on the webcam.

Despite all this, the plants are prized by collectors, who pay upwards of $500 a bulb to grow their own titanic penises. More than 100 cultivated spadixes have reached for the sky since the first human-nurtured bloom was recorded in Kew Gardens in 1889. Interestingly, the two biggest blooms were both in Germany, the first in Bonn in 2003 at 2.74 m (8 ft. 11 in.), a record quickly broken in 2005 by a plant in Stuttgart that towered to 2.94 m (9 ft. 6 in.).

To find the Titan Arum nearest you, visit this list of publicized blooms and stay tuned for the next ten years for a repeat event. You can use the opportunity to test your gag reflex.

I hit the “stats” tab on Blogger today and noticed that sometime during the night of April  20-21 Gydle passed 1,000 hits. Wow! Thanks for visiting, and keep coming by.  I promise I’ll try and post new stuff every few days so it’s worth your while. Dave is busy decoding the genome of something, I’m not sure what, looking for a message from God. When he finds it, I’ll let him do another guest post.

Update, April 27: The paper reported that more than 25,000 people flocked to see the flower over Easter weekend. None of the people in the photo were plugging their noses.

One thought on “Titanic Tower of Flower”